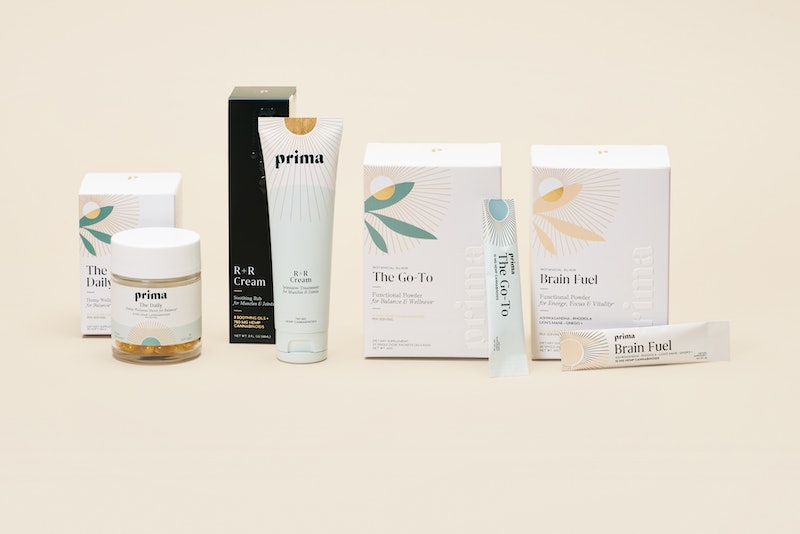 It’s 2019, and you’ve probably tried CBD at least once. (And if you haven’t? Congrats on the willpower. Seriously). You’ve also probably scanned your body for signs of bliss post-cannabidiol consumption, noted none, and declared CBD the scam to end all scams. I don’t blame you. Sometimes, CBD doesn’t actually do anything — but that doesn’t mean it can’t. Making the substance to work for you all comes down to bioavailability, according to Prima, a CBD brand.

“The term ‘bioavailability’ refers to the proportion of a nutrient or ingredient that makes it to the bloodstream after being introduced to the body,” Jessica Asaaf, the co-founder and Chief Education Officer of Prima, tells The Zoe Report. “It needs to make it to that circulatory destination in order to achieve a biological effect.” You may have heard this term used in reference to supplements, especially collagen, before. It’s the key factor in getting pretty much any ingestible to do its job.

“Cannabinoids — though incredible — aren't naturally very bioavailable,” Laurel Angelica Myers, Prima’s co-founder and COO, tells TZR. “The reason for this is that cannabinoids are hydrophobic (water-fearing) oil molecules, and our bodies are made up of mostly water. When we ingest them, we mostly digest them out.” It takes an impressive feat of engineering to turn CBD into a bioavailable substance — and therein lies the reason you may have felt let down by CBD in the past. “However, by ingesting CBD that’s been designed for better absorption and bioavailability, your body is able to experience a far greater impact and effect from the same or lower dose than traditional oils,” Myers says.

The most common way to take CBD is via tincture, “which is absorbed (if taken correctly) sublingually, and which traditionally is a faster and more effective means of delivering actives over oral ingestion,” Myers explains. “But there is actually very little scientific research on CBD and sublingual absorption.” She points to two recent studies done in the past year that demonstrated a 30 to 60 percent increase in absorption of CBD over sublingual tincture — which is precisely what inspired Prima’s just-launched line of powdered elixirs.

“What makes Prima’s Botanical Elixirs more bioavailable than other CBD products is our innovative encapsulation process that is designed to allow the cannabinoids to bypass digestion in the stomach and liver and reach the small intestine, where they are absorbed into the bloodstream,” Myers says. The details are very science-y and sort of confusing, but basically, Prima “disguises” its hemp as a water-loving molecule, rather than a water-fearing molecule. “First, we micronize our hemp extract to shrink the particle size and maximize surface area, and then encapsulate the now smaller particles in an emulsification system — a water-soluble layer which is compatible with the human body,” the COO explains. The result? The CBD can travel farther into the digestive tract, where it’s more readily absorbed — and more readily experienced.

The brand's Sept. 18 launch includes three CBD powders designed to be mixed into hot or cold beverages: Brain Fuel (for energy and focus), Rest Easy (for better sleep), and The Go-To (for balance and overall wellness). To maximize the intended effects of each, Prima has added a host of other herbs to the mix. Brain Fuel also features mega-popular mushroom lion’s mane and adaptogenic ashwagandha, both of which are said to sharpen focus; Rest Easy combines CBD with calming chamomile; and The Go-To is infused with whole hemp extract.

So, are these CBD supplements that will finally have you blissed-out and believing in the power of cannabidiol? Well, yes and no. “It’s important to remember that because CBD is non-intoxicating, the physical effects may be subtle,” Asaaf says. “You may notice that you are experiencing more energy, less negative thoughts, better sleep, better moods, less stress or tension, or other subtle changes that may become more noticeable in time.” The bioavailability of Prima’s stir-ins means you have a better chance of sensing those low-key changes, since “what you ingest is actually being absorbed by the body,” according to Asaaf.

Whether you’ve fully resisted giving into the cannabidiol craze, or you’ve been burned by non-bioavailable CBD before, now’s the time to give the trend a(nother) try. Ahead, shop Prima’s brand-new, bioavailable, botanical elixirs.

“For energy, focus and vitality, featuring 10 mg CBD plus ashwagandha, gingko, lion’s mane, and rhodiola, Brain Fuel is a great morning or afternoon pick me up to help clear the mind and bring focus,” Myers says.

Rest Easy is ideal “for a good night’s sleep,” says Myers, thanks to “10 mg CBD, chamomile, passionflower, hope, valerian, and L-theanine to calm, unwind, relax, and prepare your body and mind for rest.”

“This is your on-the-go, there-when-you-need-it botanical blend for essential wellbeing,” Myers tells TZR. “It features 10 mg of our whole hemp extract.”