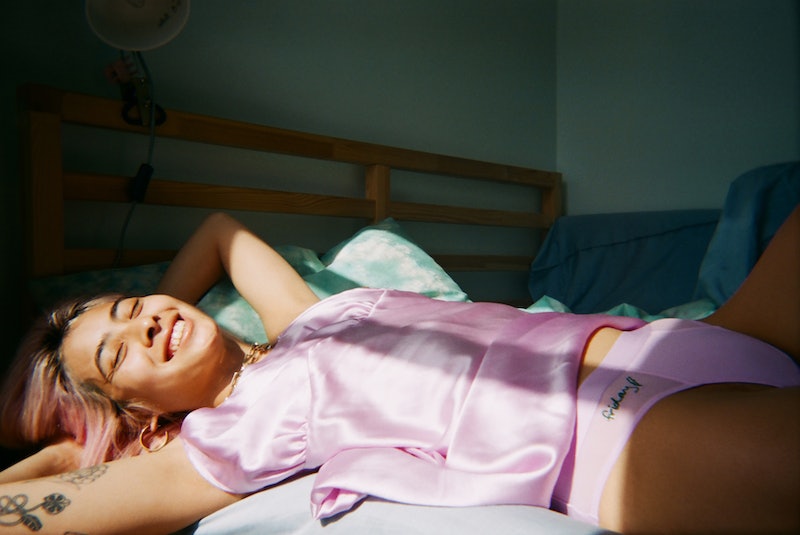 When quarantine began, the days began to slowly blur together, even for those working from home. And though you may have developed some form of routine by now, there are still weeks that seem to disappear in a blink. So, to help keep some semblance of structure in your schedule, Parade's New Days Of The Week Pack is the playful throwback your underwear drawer is missing. The limited edition $68 box includes its most popular styles of undies, each cheekily embroidered to make your morning routine just a touch simpler.

These days, the standard for intimates is all about comfort and ease, which is exactly why Parade stands out against the noise. Just a short few months since its punchy summer collection dropped in April, its newest release is an imaginative ode to your childhood undies. Embroidered with each day of the week, the assorted range comes in soft sanguine colors (Icebreaker blue, Sprinkle pink, Starry Sky navy, Frostee lavender, Glaze orchid, Buttercup green, and a combination color-block) that will actually excite you to slip on each morning. The seven pieces come in four of its best-selling silhouettes: the boyshort, cheeky, thong, and brief.

The dreamy pack is brought to life with the help of seven notable Parade girls representing each day. As both a safety precaution as well as encouragement for each model to convey their own creative expression, each shot was taken independently on disposable cameras.

And though the pack's cuteness in and of itself is probably enough to make you click 'add to cart', the new release comes with a charitable side as well. “We found a distinct thread of narratives linking underwear with gender-identity and self-expression," tells Cami Tellez, Parade’s Co-Founder and CEO. The brand already donates 1 percent of its profits to Planned Parenthood, but is further upping the ante by donating an additional dollar for every new daily pack sold. "These funds will go directly to sex education, gender affirming therapy, and reproductive healthcare,' confirms Tellez.

Freshen up your panty rotation with Parade's exciting drop, below.

Parade
Days of the Week Pack
$68