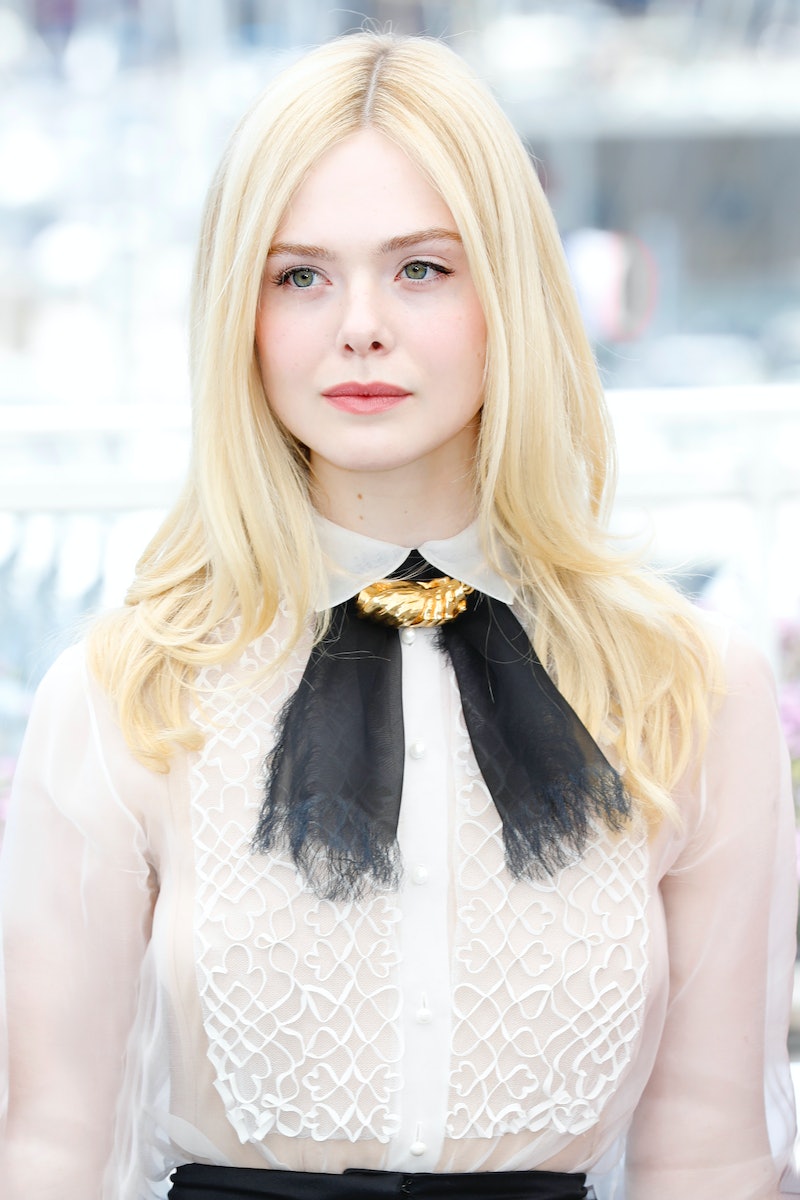 Some celebrities take to Instagram to show off their makeup skills, and actress Elle Fanning is no exception. Well at least, kind of. If you take a scroll down her timeline, you'll see the creative ways she plays with lipstick, colored brow gel, and, umm... her eczema. No, that's not a typo: In a September 2020 Instagram post, the The Great actress shared a flare-up that mimicked the look of eyeshadow. It's relatable instances like these that make her one of Hollywood's most in-demand actresses and a L'orèal's Women Of Worth ambassadors.

Invited to join the ranks of some of the most influential women in the industry, she'll be front and center for the 15th anniversary one-hour NBC special airing nationwide on Wednesday, November 25. "I remember my first Women Of Worth gala," Fanning, 22, tells me over the phone. "It was an emotional one. They always have tissues on the table because the speakers are always so inspiring and moving, it's incredible what they do for their communities." And when asked what she considers to be a woman of worth, her answer wasn't black and white. "It's hard to categorize that," she says. "Because I feel like as women, we're all worthy. Sometimes you just don't always feel that way but it's important to be reminded. I grew up in a house full of women. My grandmother lived with me, my mom, my sister, and they're all extremely opinionated and very strong. I'm proud that I got to be raised in a household with these examples of women around me."

She shares that the lessons of her childhood align perfectly with the mission of the beauty powerhouse. "I've always admired the L'Oréal Paris motto of 'Because you're worth it,'" she tells TZR. "I think it's such a beautiful statement and it's something that we all deserve to hear, that it's okay to love ourselves. I'm a big proponent of like embracing your eccentricities and differences and L'Oréal does just that. I want to show women how special and individual and unique they are, and WOW definitely aligns with that." She also says that she's inspired by many of the women that she's connected with through WOW. "Helen Mirren and Eva Longoria and Jane Fonda, are just a few of the women I've come to adore," she says. "Being in those rooms rooms with them I still get a little starstruck," she says. "But I've been welcomed in so warmly."

Another family she's been welcomed into is that from her Hulu original series, The Great. "It's based in the 1700s, so it's all about corsets and giant dresses," she says of her Catherine the Great character. "I normally get up at 5:00 a.m. every day because it takes about two hours for glam from start to finish. There's a lot of blush involved, they would do such crazy things back then with their makeup."

And while many stars avoid makeup while off set, Fanning embraces it. "I love experimenting with makeup," she says. "I love to do like the good eye or lip, things that make statements." Fanning says that the cat eye is one of her favorites, but she doesn't use traditional products. "I often put lipstick on like as eye shadow," she says.

But she's been giving equal attention to her skin. "I have, like, really bad eczema," she says. "So at any time, it will flare up. It doesn't help that I live in Los Angeles and the weather can be unpredictable. Recently, it was so hot and because of the fires, the air quality got worse. Normally I get eczema on my arm, but this time I got it from my eyes. It looked like eyeshadow, so I decided to post it. I wanted everyone to know that I don't have perfect skin. We all go through our bouts of things and you just have to roll with it."

However, she wasn't expecting such an overwhelming reaction. "I didn't even think about it," she says. "For me it was just like, 'Oh, I'm just going to post this, It looks really funny.' Next thing I know, I'm receiving all these messages from people about how they can relate. They told me that they too have terrible eczema and some even shared their personal remedies. I didn't know that other people got it on their eyes as well so it was comforting for me too."

It wasn't the first or last time she used her platform for good. "Instagram is, of course, a place that I get to be myself and keep it fun and lighthearted," she says. "But I also feel that when using your platform, it's also important to shine light on more serious issues that are important to you. Right now, the world is so divided and there's so much exclusion happening. But my generation is pretty loud we want to learn and do better. We want to educate ourselves on what's happening in the world so we can create a better future for our kids and generations to come."