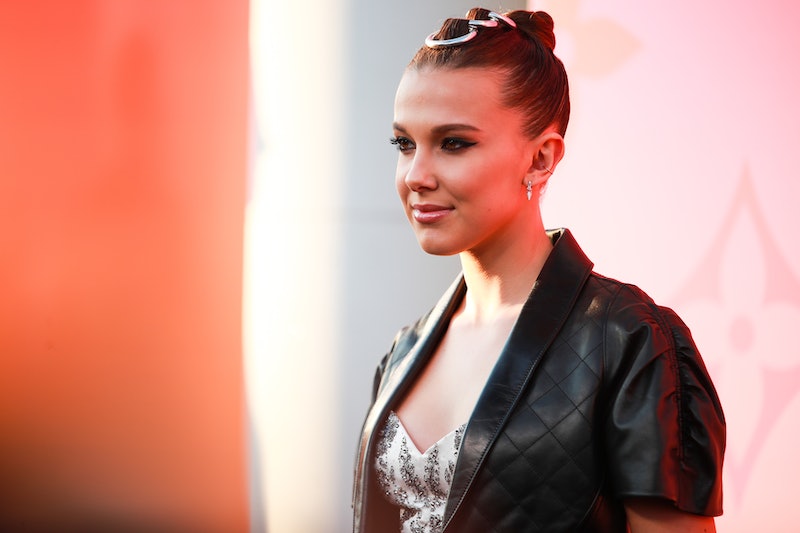 It was way back in July of 2016 when the world met their new favorite fictional tween hero, Eleven, who likely had you at least temporarily considering a badass buzzcut — and now, Millie Bobby Brown's blonde hair may convince you to cross over to the light side. Between the launch of her new cosmetics brand, Florence By Mills, and Netflix's official confirmation of Stranger Things Season 4, the English actor has been booked and busy — but she managed to carve out time to revamp her look just in time for fall. Paying a visit to YSV Salon and Spa in Miami, Brown took her golden brown bob up several notches on the color spectrum, debuting a warm honey blonde hue for the season ahead.

The Emmy Award-winning 15-year-old hasn't strayed far from her signature slicked pixie and tousled lob during her time in the spotlight, but it appears as though she's finally ready for luscious length. Once the blonde dye job was complete, Brown hopped over to another seaside salon, Dafne Beauty Lounge, for waist-length extensions — which made their initial debut on the salon's Instagram feed, ahead of Brown's celebration for the launch of her new line.

The transformation made for a massive change in a short period of time, but any former teen knows what it's like to get an idea and run with it at light-speed. And judging by Brown's ear-to-ear grin whilst meeting fans at the London-based gathering, the actor and entrepreneur is pleased with the results.

With another season of Stranger Things out on the horizon, it's hard to say how long this new look will last for Brown, but a slew of celebrities are also onboard with a stylistic switch-up. Judging by Rihanna's blunt bangs and long, straight hair and Selena Gomez's textured lob, 'tis the season for a visit to the salon, so dial your go-to stylist, stat.

If you feel it's time for a blonde moment like Mills', arm yourself with products that will keep your new hue pristine for as long as possible. Ahead, The Zoe Report's selection of must-have blonde-enhancing formulas.

Fight brass and keep your strands cool with this neutralizing mask from Kérastase. It's ideal for icy blonde and gray hues. Daenerys, that you?

Multitask with this ultra-violet formula that will neutralize unwanted tones while enriching damaged strands with argan oil and shea butter for maximum moisture and shine.

With nearly 1000 reviews and a 4.4 star rating, this tone-correcting shampoo will help to banish hints of yellow and protect against color fading.