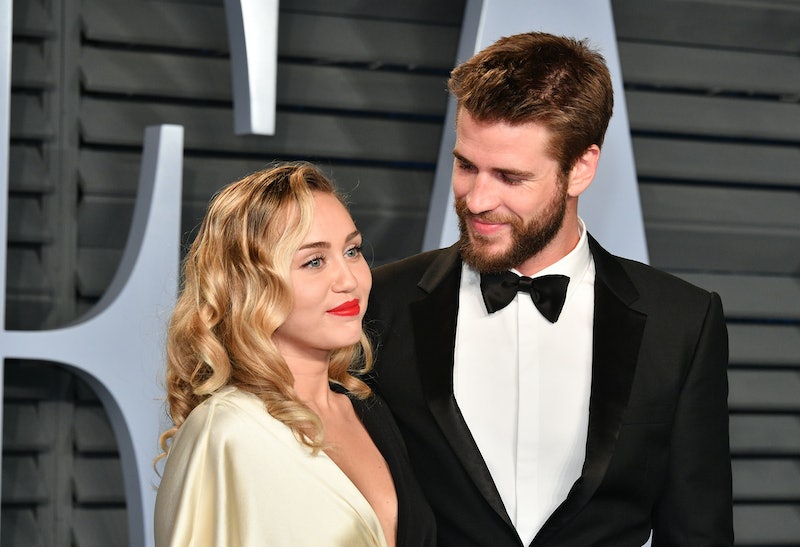 It's official: after 10 years of dating, Miley Cyrus and Liam Hemsworth are married at last. People suspected that the singer and her Aussie beau were planning a secret ceremony over the holidays, and on Weds., the couple confirmed the rumors with a series of sweet black-and-white photos. Thanks to Instagram, Miley Cyrus' wedding dress designer has been revealed.

Cyrus and Hemsworth tried to keep their nuptials under wraps over the weekend, but to no avail. Their stealthy plans were quickly exposed by a friend who posted Cyrus in a wedding dress and a set of balloons that read "Mr." and "Mrs." in the background of an Instagram story.

The couple has since come clean. They reportedly tied the knot in a small, intimate ceremony at Cyrus' Tennessee home two days before Christmas. The bride's Instagram photos show the newlyweds embracing in front of a fireplace decorated with roses.

The 26-year-old wore a silk, off-the-shoulder gown by Vivienne Westwood. A video that Cyrus posted on Twitter of her dancing to "Uptown Funk" shows the dress in more detail. The custom silk-satin number features a sweetheart neckline, a corseted bodice, elegant draping, and a full skirt that she clearly had fun with on the dance floor.

It's no wonder why Cyrus — a rule-bender, herself — chose Vivienne Westwood to design perhaps the most significant outfit of her life. After all, the 77-year-old British designer has been credited for bringing punk into the mainstream. You might remember the over-the-top wedding dress that Carrie Bradshaw wore in Sex in the City, also a Westood design.

Cyrus', on the other hand, was a minimalist's dream. Her groom — who has also posted one of their wedding portraits on Instagram with the simple caption, "My Love" — kept his look low-key in a black suit and casual white sneakers.

The couple's on-again, off-again relationship started a whole decade ago, when they met on the set of The Last Song. As you probably remember, Hemsworth popped the question back in 2012, but the couple separated about a year into their engagement. To the delight of many, the couple rekindled their romance and started dating seriously again around 2016.

On Dec. 23, 10 years after their first meeting, the inseparable duo exchanged vows in front of a handful of close friends and family. The guest list included Cyrus' mother and sisters, as well as Hemsworth's brothers. Cyrus, by the looks of it, sang and danced her heart out in that chic silk gown in the comfort of her own home, precisely how she had imagined her big day to be.