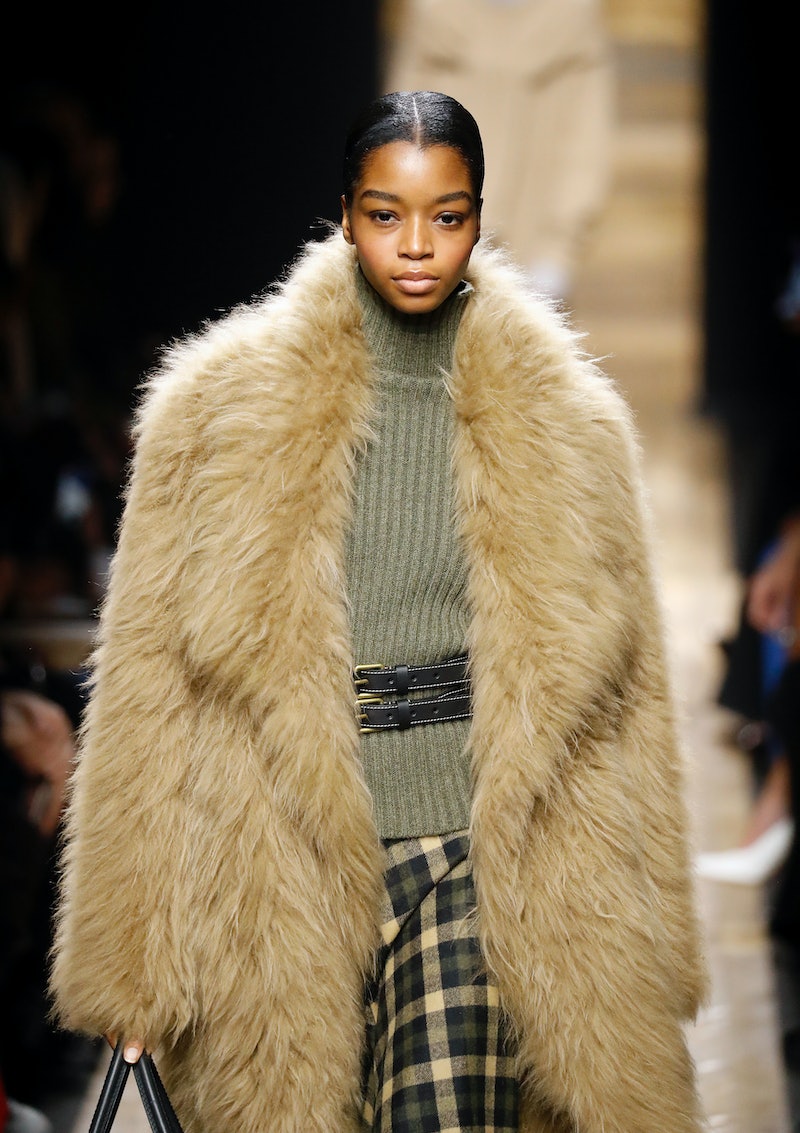 When you hear the name Michael Kors, you can probably conjure an image almost instantly: chic and tailored, but always with a fun dollop of classic Americana. The beauty looks the designer chooses for his runway shows follow a similar pattern. Various takes on fresh skin paired with shiny, silky hair tends to be the general direction. But at Michael Kors' Fall/Winter 2020 show in New York on Feb. 12, things went in an edgier direction.

Instead of free-flowing locks, lead hairstylist Orland Pita slicked the hair back into sleek, architectural chignons. "It's a very equestrian-inspired show, so we wanted the hair to evoke that," he tells TZR. For the girls with long hair, Pita parted the hair down the middle before slicking it back into a low ponytail. He then straightened the pony, then twisted it into a tight coil. "Then, we're just wrapping it in a figure eight pattern," he says. The ends were tucked into the top of the hair, and then allowed to spike out to create a little extra edge. To keep these spiky pieces in place, Pita blasted them with the Humidity Block Hairspray from his own line.

Models with natural hair kept their texture, but in a uniform way. Pita wet the strands down and then dried them in such a way that the hair was kept tight against the scalp. For models with shorter hair (here's looking at you and your bob, Kaia Gerber), Pita opted for a boyish side part before sweeping the hair back into a small French twist.

Maybelline lead artist Dick Page sought to highlight the individual beauty of each model in order to keep the eye on the hair. "We're not imposing any structure other than emphasizing the brow," he says. In order to amplify said arches, Page swept on Maybelline's Brow Xtensions Thickening Fiber Stick, which launches in June 2020. This innovative brow stick (available in six different shades) actually has fibers worked into the crayon. These attach to your natural brow hairs, giving them a fuller, fluffier look. Page then set the brow with Maybelline's Brow Fast Sculpt Gel Mascara in Clear.

The rest of the face was kept minimal. He brushed a touch of the brand's Tattoo Studio Sharpenable Gel Pencil Eyeliner in Smooth Walnut and Bold Brown onto the top and bottom lash lines with a shadow brush for a more diffused effect. A swipe of mascara finished off the look.

For lips, Page patted on some Maybelline Baby Lips Lip Balm in Quenched, and a dot of Maybelline's Cheek Heat Blush which he applied with a big brush. Nails were kept similarly minimal, with lead nail artist Jin Soon just swiping on her brand's HyperRepair Nourishing Nail Treatment, a cuticle oil, and her Matte Maker Topcoat. "The girls' nails tend to be dry this far into the week," she says. "Michael just wanted them to look fresh and healthy."