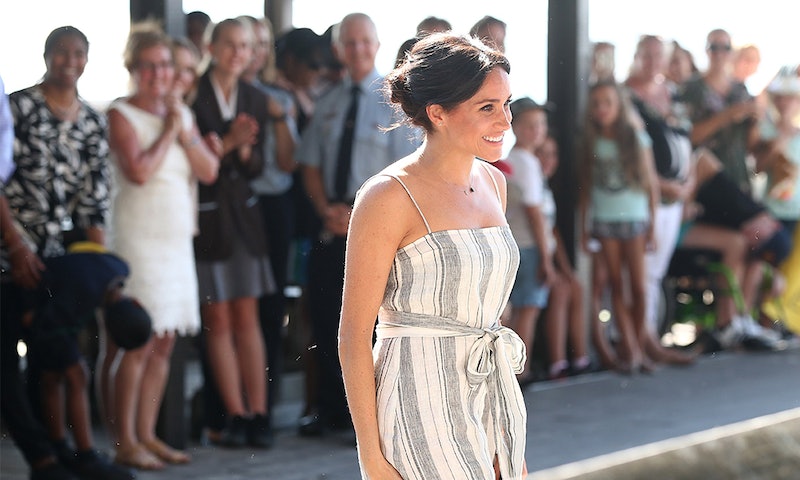 Since joining the family in May, the Duchess of Sussex has learned a thing or two about bending royal protocol — especially when it comes to her closet. From off-the-shoulder dresses to short hemlines, the Duchess continues to make the palace a bit more trendy, one stylish outfit at a time. And while Meghan Markle's Reformation dress may have gone against the royal norm, it managed to strike the ultimate balance between playful and sophisticated attire.

Markle and her husband, the Duke of Sussex, have spent the past few days on a royal tour down under, where they'll be visiting Australia, New Zealand, Fiji, and Tonga. While attending a meet-and-greet on Fraser Island, Markle opted for one of her most dating looks yet. The expectant mother wore a thin-strapped, blue-and-white striped dress, featuring a tie-up belt and a thigh-high slit.

She paired the lightweight linen dress with brown gladiator sandals by Sarah Flint, black Karen Walker sunglasses, and delicate, layered necklaces. Markle completed the casual outfit by pulling her hair into a low, messy bun with face- framing pieces in the front. It's likely that she achieved the subtle updo all by herself, as Markle's been known to do her own hair and makeup while on tour.

While Markle's Reformation dress doesn't break any official rules, it's undeniably bolder compared to royal choices of the past. While some rules are followed closely by all royals (like needing the Queen's approval for formal outfitting decisions, including wedding dresses and tiaras), things like hemlines and cleavage are considered etiquette-based choices. This separation between rule and suggestion leaves plenty of room for interpretation, and even royals before Markle (including her late mother-in-law, Princess Diana) have used this to experiment with new trends.

Markle, who is no stranger to veering away from the classics, has made headlines over the past year with various looks that weren't traditionally "royal." The Duchess wore a black mini tuxedo dress, an off-the-shoulder wedding gown, and she rarely opts for tights. But even when she takes risks, Markle's style choices are always sleek and sophisticated.

Unsurprisingly, Markle's exact Reformation dress has already sold out. But if you're ready to try out the royal trend for yourself, prepare to shop The Zoe Report's favorite dresses featuring the perfect thigh-high slits, ahead.

This jewel-toned midi dress is perfect for a night out when paired with a black-leather jacket and pumps. Wear your hair in a Markle-inspired low bun to show off the sassy open back.

Try out a cold-weather version of the trend with this cashmere-and-wool sweater dress. The royal-blue shade makes a statement, while the simple silhouette keeps it totally versatile. Wear this piece with slouchy boots, sneakers, or even slingbacks.

If you're already familiar with a single slit, maybe it's time to try two. Layer this belted number to your hearts desire for all of your transitional-dressing needs.

This little black slip dress is the ultimate wardrobe staple. Wear it under an oversized sweater for a polished version of a cozy look.

While linen may seem like a summer-only fabric, it's possible to make it work for the colder months. Wear this dress under a plaid blazer and mix prints with snakeskin booties for some added excitement.

A little bit of sparkle goes a long way with this metallic maxi dress. Try layering it over a form-fitting black turtleneck and printed tights.