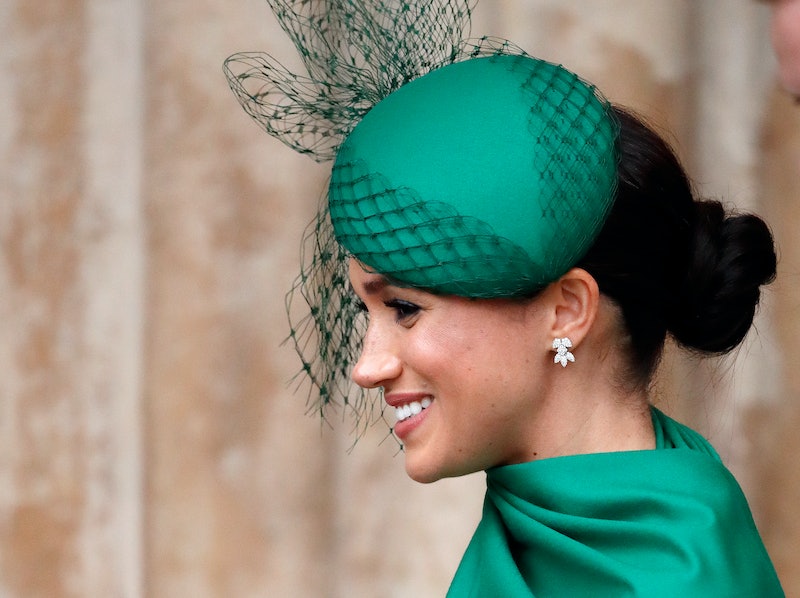 Although the Duchess has now officially left the royal family, it doesn't look like Meghan Markle's signature messy bun is bidding everyone adieu just because she is. In an Instagram video posted by Save The Children UK on May 6, Markle is seen at home, reading to her son, Archie, for his first birthday while still sporting her iconic style — just in a much more casual way.

Markle and her messy bun go way back — like pre-royal family 2013 era — but the style became practically synonymous with the Duchess when she wore it at her wedding to Prince Harry in May 2018. Since then, it seems it wasn't just Prince Harry and Markle who tied the knot, but Markle and the hairstyle too; it appeared, in varying iterations, at royal birthday parties, Ascots, trips to other countries, fundraisers, and more.

And now, the bun has gotten an at-home makeover since, like the rest of the world, Markle has been staying home in light of the coronavirus. While celebrating Archie's first birthday with a reading of "Duck! Rabbit!" to help raise funds for non-profit Save The Children UK, Markle paired a chambray shirt and minimal makeup (maybe even none) with a tightly pulled back bun that hit just below the crown of her head. There's none of the usual accenting braids, face-framing tendrils, or slicked back precision; instead, there are a few bumps in the front and pieces twisted around the base of the bun.

It's clear there was intent in maintaining a cohesive shape and to not have pieces flailing about, but it's *almost* like the bun you throw up while washing your face — which, as Markle proves, is actually a look fit for a Duchess.

While it may not be the most elaborate style, George Northwood, the hairstylist who finally revealed he was behind the iconic look in March 2020, told British Vogue recently that the messy bun look is all about "refined imperfection." And, this at-home version definitely still embodies that perfectly.