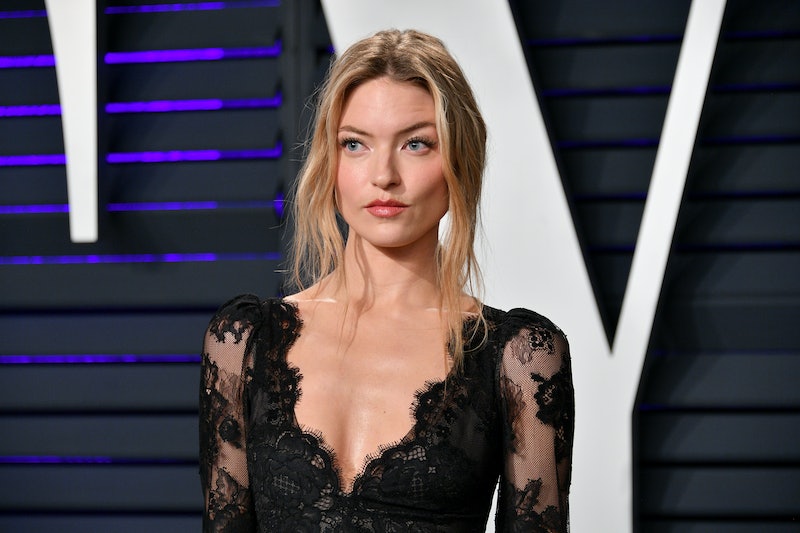 It's safe to say Martha Hunt has had quite a busy (and über-stylish) week. The model spent Mon. evening celebrating Gigi Hadid's 24th birthday in a casual jeans-and-tee combo. A day later, she stepped out for the Time 100 gala in New York City, wearing a feather-adorned Jason Wu frock. But it was the getup she sported just hours before Tues.'s fancy soirée that officially takes the cake as her best look this week. Yep, Martha Hunt's red silk skirt outfit is as stylish as it is comfortable — and it proves the '90s staple isn't going anywhere.

On Tues., Hunt was photographed en route to Taylor Swift's NYC apartment — and her off-duty ensemble is one you can easily fall back on whenever you're in a wardrobe rut this season. The Victoria's Secret Angel opted for a '90s-inspired ruby-red silk skirt, which she paired with a long-sleeve, ribbed shirt that she kept untucked for a more nonchalant feel.

Hunt's go-to shoe of choice has long been a pair of white Nike Cortez leather sneakers (EmRata is also a fan of the '80s classic), so it should come as no surprise that she reached for them yet again on Tues. Comfort factor aside, the model's crisp kicks infused her look with a welcomed dose of sportiness.

Hunt slung a mini top-handle circle bag, which hailed from minimalist label, The Row, over her shoulders, rounding out her look with a low ponytail and a swipe of bright-red lipstick. This was also the beauty look she chose for the Time 100 gala.

Slip skirts have been around for quite some time now, and just about every celebrity has put their own styling spin on the '90s classic. Rihanna wore her glossy, pearl-colored pick with an oversized Y / Project boxy blazer back in Jan., while countless others have paired it with everything from hoodies to oversized sweaters. There's something about Hunt's approach, though, that feels like a no-brainer for the springtime.

Inspired to recreate Hunt's latest getup? Do so with The Zoe Report's roundup of pretty silk skirts, below.

Knee-length slip skirts are having a major moment right now, and Hunt's latest outfit is proof. Wear this pretty pink number with white sneakers and a simple shirt, opting for a low-key beauty look, too.

A white slip skirt boasts so many styling possibilities. Wear it with a long-sleeve turtleneck and sneakers or dress it up with strappy mules.

A fresh daisy print adds a sweet touch to this '90s classic. Wear this Reformation pick with white sneakers, a straw bag, and red cat-eye sunglasses.

This skirt from Raey is so elegant (thanks to the lustrous silk satin fabric), but it can easily be dressed down, too.