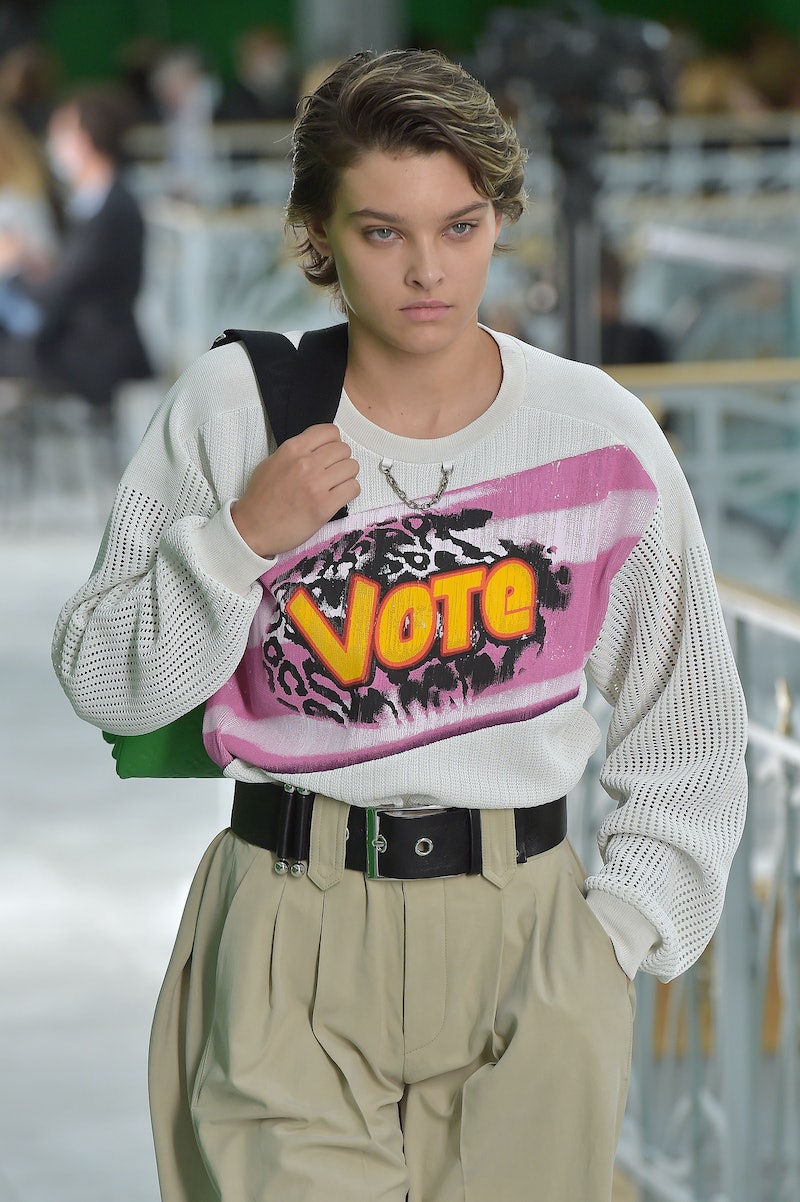 High Octane Energy. Nicolas Ghesquière's revved up outing for Louis Vuitton's Spring/Summer 2021 women's collection was raring to go. So were the Gen Z fans and paparazzi lined up outside to get a glimpse of Alicia Vikander, Léa Seydoux, Venus Williams, Laura Harrier, Natalia Vodianova, and Olympia of Greece arriving at the show, social distancing be damned. All the guests in attendance were locals either from France or in the capital city for other reasons.

Also ready for its close up was Samaritaine — LVMH's new hotel, condo, restaurant, and shopping complex in the former landmark Parisian department store. Set open as the pandemic hit, its debut is on hold. But both the location and the collection signaled an energized look to the future, integrating motifs from the past.

Guests taking their seats on the top floor — accessed via modern escalators —marveled at the original Art Nouveau store details such as the intricate wrought iron, vaulted glass ceiling. They restored painted walls depicting peacocks trees on a mustard yellow backdrop. Green felt panels covered parts of the complex on the lower floors, presumably to keep it under wraps until its official unveiling but continued to the top floor where some of the guests sat in a painted floor to ceiling green screen room. Kudos to Vuitton for one of the most socially-distanced seating setups of the week (to be fair, everyone who showed live dramatically reconfigured seating, theirs was just extra distanced). They also had two showtimes to disperse the guests.

That was, of course, the IRL experience. Guests viewing from home will see scenes from a Wim Wenders films Wings of Desire on those green walls. The film explores a normally asexual angel falling in love with a mortal. The online experience also features an interactive environment where guests can direct a camera to create a personalized experience, the falling in love part optional. (That explains the mini cameras pointed at the audience throughout.)

The interactive elements set the stage for what Ghesquière had to say, which, on the one hand, had little to do with angels but rather a "stylistically vague" gender. The first look out was a model sporting a cute tomboy hairstyle wearing a long sleeve thermal-style tee with VOTE across the front. Promoting the vote has been a vast movement for American designers and brands vested in the outcome. It speaks volumes when a foreign-born brand and designer also make that statement. Those casual tops paired with belted baggy chinos and swooshing overcoat resulted in a vibe that was luxe-up Gen Z rave-slash-skate-gear.

More of that came reinforced by the musical soundtrack Neutral composed by Tanguy Destable and directed by Woodkid, which featured spoken segments reciting the tee's words such as VOTE, DRIVE, and SKATE. The baggy men's styled pants often had a shiny thread finish. The models moved at the speed of light in oversized trenches sweeping the floor. There was even a pit-crew style jumpsuit ready for action.

But they were also ready for work as the collection featured takes on typical suit dressing jazzed up for a generation that doesn't succumb to conformity in looks, clothes or gender identities. Whether baggy and broad-shouldered, with cropped leather jackets or sequins, suits made a statement for those in this race. Smart double-breasted topcoats and a coat dress, Members Only-esque jackets, and layered shirt and vest looks added to the air of androgyny.

But even these crew bosses want to dress it up. The show's finale comprised the most complex T-shirt-inspired dresses and top ensembles that spliced and layered the logos and message tees and threw in the occasional satin shoulder flounce. In these gals world, it's all good.