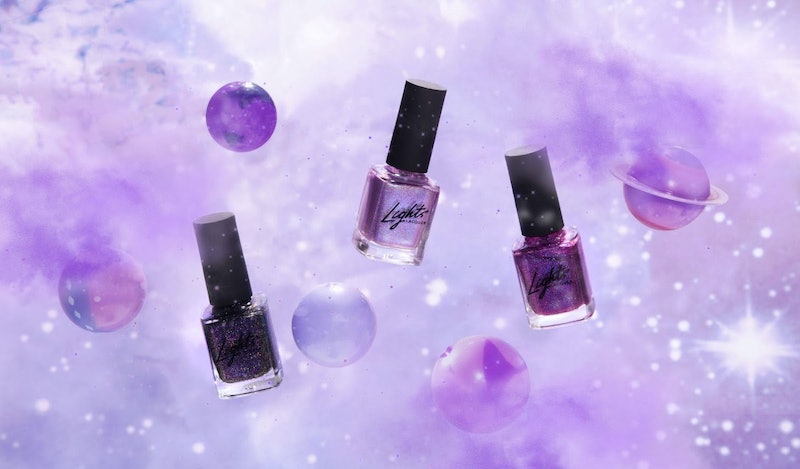 Any '90s child who had a CRT TV and access to the Disney Channel remembers the lyrics "zoom zoom zoom, make my heart go boom boom" as if they were sung by a certain fictitious intergalactic pop star just yesterday. The iconic banger hails, of course, from Zenon: Girl of the 21st Century, the 1999 film that inspired your entire aesthetic back then and is about to influence your nail color now via Lights Lacquer's new Supernova collection.

Kathleen Fuentes aka KathleenLights was 8 years old when the movie debuted and its space-raised heroine must have had a lasting impression on her — 20 years and some 4 million YouTube subscribers later, Zenon Karr is still a muse for the beauty vlogger-slash-Lights Lacquer founder.

Her new nail polish trio, stealing its name from Protazoa's "Supernova Girl" hit, features three holographic hues: a fuchsia pearl and blue-violet shimmer named after Zenon; a lavender that transitions to blue-gold named after her bestie, Nebula; and one named after the spiky-haired singer himself that's deep purple and rainbow with a blue-black base.

The lacquers are vegan, cruelty-, and seven-free, and sold exclusively at LightsLacquer.com for $9.50 apiece or $28 for all three.

Shade-shifting polishes have been a major player on the mani scene while cosmic themes continue to reign over beauty. Next, we'll be using words like "lunarious major" all the while wearing wire-wrapped space buns and hot-pink tights.