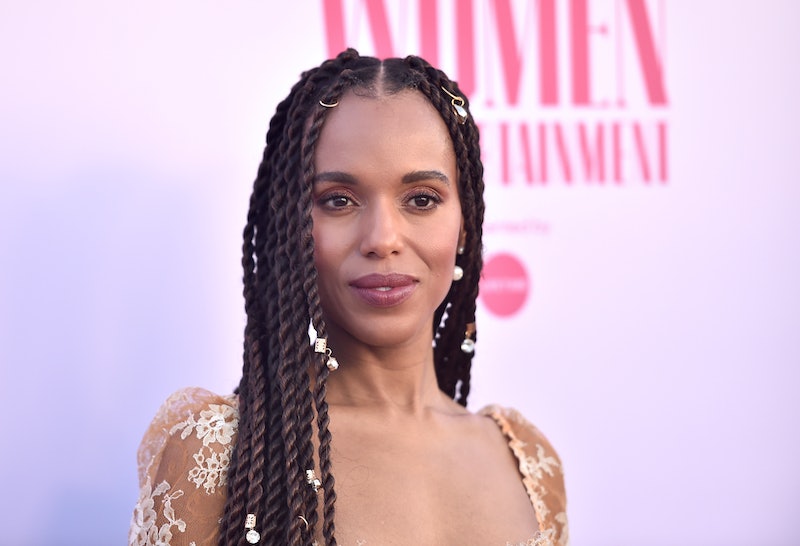 One of the best parts of awards shows is reviewing the looks after the fact. While it's easy to admire them from afar, it takes a minute to truly appreciate every little detail that went into them. In most cases, it may even take a second glance to pick up on things you missed. The 72nd Primetime Emmy Awards were no exception to creativity, and Kerry Washington's nails at the Emmys this year were the perfect embodiment of the tiny features that can go into pulling together an incredible look.

The Emmy Award-winning star had two looks that were equally deserving of recognition, but her first really stole the show, featuring a manicure that matched her outfit in the sweetest way. Her nails weren't your typical, pre-printed nail designs or stickers, but rather an expertly crafted work of art.

To ensure they paired perfectly with the flowers adorning Washington's Oscar de la Renta dress, celebrity nail artist Kim Truong delicately hand-painted the nails. She used Gelish polish in both Pink Smoothie and Matte Top It Off to serve as the canvas and top coat, and decorated a few of the nails with oak leaves and daisy-like florals.

The simplicity of the nails both supported and kept the attention on her dress, and the rest of Washington's makeup, done by Carola Gonzalez, remained fairly simple, too. This was all save for a gorgeous pop of color on her lips — courtesy of Neutrogena's MoistureSmooth Color Stick in Cherry Pink.

If Washington's pretty manicure is causing you to do a double take at what other little nuances you may have missed during the virtual awards, there are a number of other stars who worked with their glam teams to sprinkle in fresh and unique touches to their 2020 looks that are worthy of praise.

One matchy-matchy example was the wash of blue eyeshadow makeup artist Latrice Johnson added to Regina King's lids to pair with her gorgeous cobalt blue dress. When it comes to powerful looks, Yvonne Orji's buzz cut took the cake, as it had the Black Lives Matter symbol shaved into it by Mickey West-Potts. Another star rocking it in the detailed hair department was H.E.R., who had her head bedazzled with jewels by hairstylist Nina Monique. It was a combination of all these looks (and more) that helped make the Emmys a night full of incredible beauty surprises — even if there was no red carpet to flaunt them on.