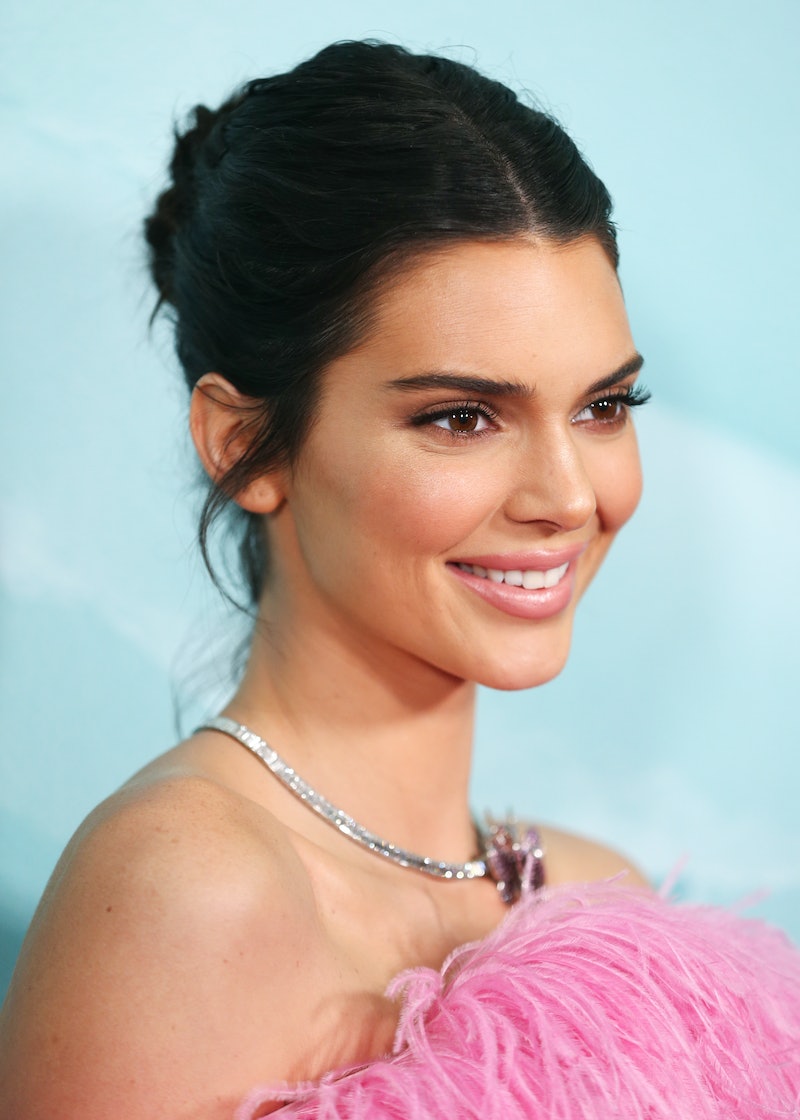 With a little over a month of summer left, it's prime time to pull out all the stops with bold hues, flirty sandals, and barely-there frocks for the remainder of the season. The world's highest-paid model obviously agrees, because Kendall Jenner's lime green dress caused quite a splash at West Hollywood hot-spot, The Nice Guy on Fri. night. As the supermodel's younger sister Kylie celebrated her 22nd birthday on an ultra-lavish yacht off the southern coast of Italy, Jenner enjoyed a night-out alongside Khloe Kardashian, who opted for a darker colorway with leather croc-effect pants and a strapless corset, accented by a glitzed-out brick phone clutch by Kardashian-favorite, designer Judith Leiber.

Justin Bieber and Hailey Baldwin were also in attendance, though the couple's outfits were decidedly low-key compared to the decked-out KarJenner pair. Staying true to her signature summer street style, Baldwin opted for a fluffy pink crop top, oversized jeans, and high-top Vans sneakers while her pop star husband was cozy in a pale pink smiley-face hoodie from his streetwear line, Drew.

Coordinating a vivid green eye with the energetic body-con dress, Jenner kept her daring makeup on full display thanks to a sleek and shiny updo.

The neon trend has demonstrated serious staying power over the past few seasons, and Jenner's outfit is a clear indication that the fashion set isn't ready to retire electric hues just yet. If you still haven't given the intimidating trend a whirl, now's your chance to hop on the model-approved colorway. It's not every day the shade that splattered TVs on '90s Nickelodeon makes a comeback, and slime green has become so commonplace that it's practically a new neutral at this point.

As you well know, fashion repeats itself, which means loud trends such as this generally have a looming expiration date. But at this rate, neon green will likely make its way into street style rotations for fall. Jenner's exact style is still available to shop online, so snag the model's look for yourself to finish summer with a bang, then shop The Zoe Report's mix of neon green dresses that will help you commence autumn with confidence.

Between the lace overlay, sweetheart neckline, and bold hue, this formfitting mini dress is a femme yet daring pick for end-of-summer nights.

Get Kendall's look at a fraction of the price with this basic bodycon style from Revolve.

This voluminous option from Rachel Comey is the perfect way to introduce daring hues into your office-ready lineup.

Cozy but luxe, this two-piece satin set has '90s R&B music video written all over it.

Aside from an electric colorway, asymmetry is a surefire way to stand out style-wise.

With this long-sleeved, effervescent number, you're bound to stay snug in the coolest way this fall.

From the mid-length hem to the cross-neck detailing, this minimalistic style is summer simplicity at its finest.