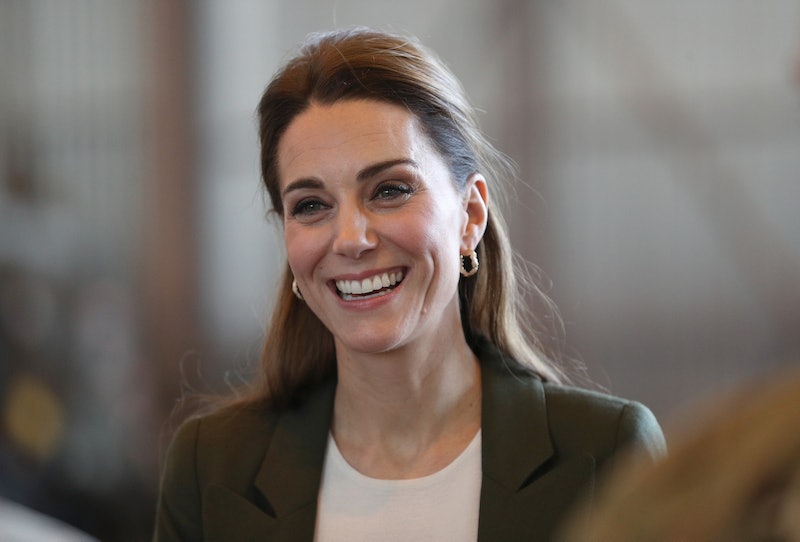 It's no secret that Meghan Markle's unconventional royal style has made a lasting impression since she married Prince Harry in May, and it looks like her sister-in-law has officially followed her lead. Kate Middleton's pantsuit is a surprising addition to her clothing collection — and a welcomed change of pace that may be inspired by Markle herself. If you're wondering how to incorporate a structured suit with a feminine touch into your own everyday wardrobe, you can now pull inspiration from two of your favorite royals.

According to a tweet from Kensington Palace, Middleton and Prince William landed at RAF Akrotiri in Cyprus on Weds. The couple's official visit to the Mediterranean island will include meeting with personnel and their families at a military base in Akrotiri. Middleton suited up (literally) in an ensemble that combined elements of professionalism and trendiness. Rather than opting for a matching set, the Duchess of Cambridge paired two rich-toned separates to create a cohesive post-flight look.

She layered a fitted olive green blazer by Smythe on top of a classic white tee and cinched the waist by adding a thick belt to her navy, wide-leg pants. She kept her accessories minimal with a suede clutch in a matching green hue, black pointed pumps, and a pair of gold hoops. Her mid-length hair sat perfectly placed in a volume-infused half-up style, drawing some extra attention to her subtle highlights.

Although Middleton has provided the public with plenty of outfit envy in the past, the concept of a pantsuit is relatively new to the mother of three. When attending royal engagements and formal events, she tends to lean toward her long-established style choices, which include empire-waist dresses, wool coats, and skirt sets. When she does decide to go for pants in a more casual setting, you'll usually find her wearing tailored denim, knee-high boots, and a blazer.

She typically leaves the menswear trend to her sister-in-law, Markle, who has demonstrated her love for bending royal protocol while always remaining sophisticated and polished. Markle opts for pantsuits regularly, as well as some more unusual fashion choices like a mini blazer dress, a sheer skirt, and a few off-the-shoulder pieces.

This royal-inspired look is your opportunity to mix and match the suits that are already hiding in the depths of your closet in ways you've never imagined. Wear them to work, to a family holiday party, or even a night out on top of a lace-adorned camisole. Ahead, shop Middleton's jacket along with The Zoe Report's picks for Duchess-approved olive blazers and navy pants.

This blazer is Middleton's favorite (and its name is quite fitting). For a more casual setting, try wearing it with black denim, ankle boots, and a striped t-shirt.

This blazer is made with breathable Japanese crepe fabric, ideal for layering over a blouse or even under a wool trench.

Pair this ultra-structured silhouette on top of a form-fitting knit and add a midi skirt for some contrast.

Victoria Beckham is another British fashion icon who's known for her affinity for tailored suiting. These wide-leg pants are an investment piece that will carry you through seasons to come. Plus, they're currently on sale for more than 50 percent off the original price.

Make accessorizing that much easier with a pair of trousers that feature a built-in belt.

Wide-leg pants are an easy way to dress up a casual look. Pair them with a leather jacket, a silky blouse, and pointed pumps for a relaxed and polished vibe.