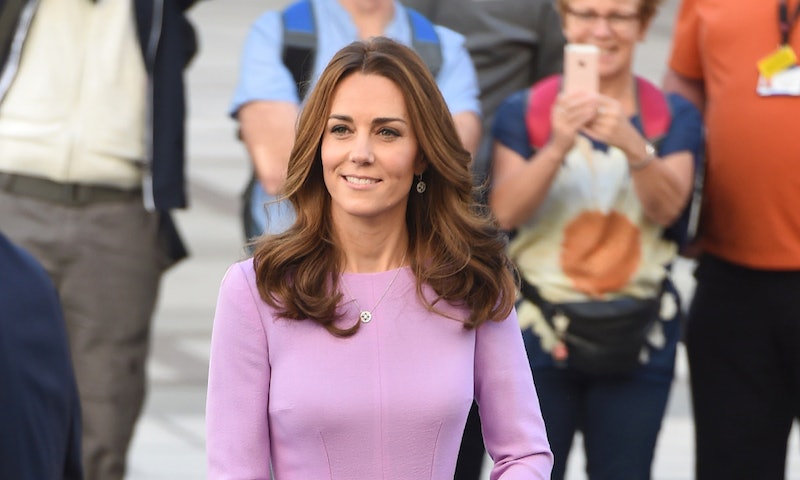 Kate Middleton might be a duchess, but she's the queen of recycling the perfect outfits. The royal made an appearance at the Global Ministerial Mental Health Summit in London wearing an Emilia Wickstead piece she's actually sported before. Kate Middleton's lavender dress is a staple in her regal wardrobe — and it's easy to see why.

The Duchess of Cambridge dusted off an old favorite for the summit on Tue., which she attended alongside husband Prince William. The dress is an Emilia Wickstead A-line wool-crepe dress aptly named Kate. The elegant piece features a boat neck, long sleeves, a detachable belt at the waist, and a fit-and-flare skirt. The Kate dress comes in baby pink, navy, and scarlet red, but Middleton's is a soft, pastel-lilac hue.

Middleton paired the sophisticated dress with a crocodile handbag by Aspinal of London in the same color and neutral suede Gianvito Rossi pumps. She accessorized with matching Mapping & Webb earrings and a necklace, and styled her new haircut in bouncy curls. The look is reminiscent of Middleton's outfit in Hamburg during last summer's royal tour of Poland and Germany. Then, Middleton wore the exact same lavender frock with pointed-toe heels, but carried a crimson clutch instead.

Middleton loves her classic purple dress, but it certainly isn't the only Emilia Wickstead piece in the Duchess' closet. The mom of three started wearing the New Zealand-born designer after her debut at London Fashion Week in 2012. That year, she wore a pale-pink frock with a square neck and pleated skirt to both the Sovereign's Luncheon and the Queen's Garden Party at Buckingham Palace. Two years later, Middleton wore that exact dress again — this time in blue — to the royal tour of Australia and New Zealand.

Middleton is also a fan of the Emilia Wickstead coat dress (she owns the piece in powder blue and emerald green), which she sported during a visit to Luxembourg last year. The Duchess even wore custom pieces while pregnant with Prince George, including a version of the cheery-yellow Marella coat to the Queen's tea party and a baby-blue sleeveless crepe dress to an event for the National Portrait Gallery.

Middleton has a reputation for re-wearing her favorite pieces, like her go-to pair of black knee-high boots by Stuart Witzman for Russell & Bromley and the red quilted down jacket by Perfect Moment she wore over and over again in 2017. For formal occasions, the Duchess typically opts for sophisticated dresses in pale, soft colors, which describes Emilia Wickstead pieces to a T.

The Kiwi fashion designer, now based in London, is a leader in luxury womenswear, known for ultra-feminine dresses in pastel shades. Fellow royal Meghan Markle channeled Jackie Kennedy earlier this year in a custom skirt suit by Wickstead when she attended April's Anzac Day memorial at Westminster Abbey. Other notable fans of Middleton's go-to brand include Poppy Delevingne, Shailene Woodley, Elizabeth Banks, and Gigi Hadid, who have all hit the red carpet in this designer's gowns.