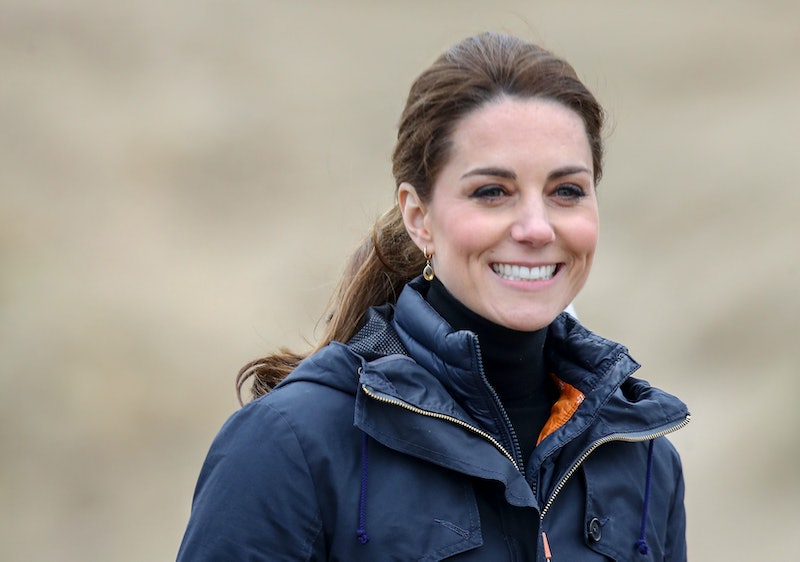 Whoever has been doing the duchess' hair lately deserves a raise. Before, the royal rarely ever strayed from her signature bouncy waves save the occasional updo, but recently, she's been experimenting more with twists and plaits. Kate Middleton's braided ponytail is the latest look you'll be eager to recreate.

The Duchess of Cambridge in casual clothes simply never gets old. Once again, the royal broke out her favorite pair of Chloe hiking boots for an outdoorsy engagement alongside Prince William in Cumbria on Tues. The two spent their day meeting with "members of the local rural community involved with farming," according to the official Royal Family Twitter.

The casual outing called for a pair of her go-to black skinny jeans (Zara, maybe?) and a khaki utilitarian-style jacket with gold-toned buttons by Troy London. She dressed it up by layering a white ruffle-collared top under her Fjallraven sweater and heart-shaped Kiki McDonough earrings.

The true standout accessory of Middleton's look, however, was the hair. From the front, it looks almost like Middleton has pulled her iconic chestnut waves into yet another low-key ponytail, but from a different angle, you can see that there's actually some pretty braided action in the back.

Middleton's hair was braided into a low ponytail with a piece of hair wrapped around the elastic to up the chic factor. The intricate updo was so subtle barely anyone even noticed that the Duchess was having a major hair moment.

The braided pony comes only a couple weeks after she wore another surprising style — a braided half-up look — to the Chelsea Flower Show.

Needless to say, Middleton seems to be warming up to plaited ponytails lately. Now, let's all hope she keeps the new styles coming because everyone could use a little bit of royal hair inspiration this spring.

Copy her latest braid-adorned low pony with some of The Zoe Report's trusted products, ahead.

Separate the top half of your curls into three identical sections and braid loosely in the back, securing with a ponytail just above the nape of your neck. For a Middleton-inspired touch, wrap a piece of hair from the ponytail around the elastic and secure with bobby pins.

Once everything is in place, make sure it stays (and add a little volume while you're at it) with the help of this flexible-finish hairspray.