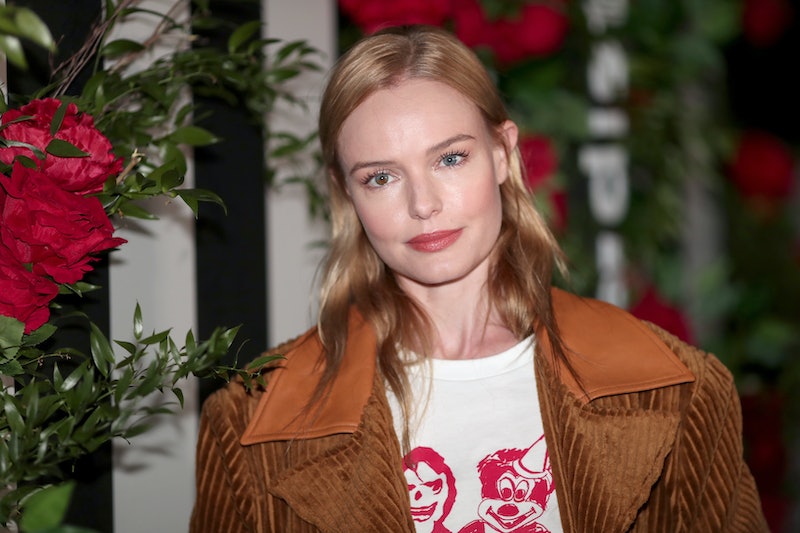 Kate Bosworth has slain every ensemble she's sported during the Nona press tour, thanks in large part to the handbag she won't put down. Micro bags are in, and the model-turned-producer has been carrying an elevated version of the trend. Kate Bosworth's brown bag is the mini accessory that goes with everything.

Bosworth had a busy day on Thurs. running around New York to promote the film she produced with Michael Polish, Nona, before its Fri. release. She made appearances at AOL's BUILD, SiriusXM, and Late Night with Seth Meyers to discuss the film, wearing a whopping five outfits in a single day. Her parade of outfits — from a turquoise Proenza Schouler suit to a dress adorned with horses — was like a full-blown fashion show. The model's looks just kept getting better, and one little handbag was a staple.

After wearing the sleekest stone-embellished, faux-tweed separates by Chloé, Bosworth changed into a 3.1 Phillip Lim jumpsuit. The black one-piece featured a cutout waist and a flowy silhouette courtesy of large leg slits. The tiny lizard-leather tote she carried was the cherry on top of both outfits.

The bag is by an under-the-radar brand that you've likely seen on your Instagram feed. Hunting Season makes everything from square trunks to crossbody bucket bags and beyond. Bosworth's favorite is a taupe, top-handle bag with a sleek fold-over flap.

The neutral accessory is a sophisticated take on the micro bag trend that emerged in 2017. Designers seemed to have been competing for how small they could go on the runways of Spring 2017 Fashion Week. Chloé, Valentino, Hermes, and others featured handbags that were even smaller than their handles — not even big enough to hold a cell phone.

And just when you think bags are getting bigger again, an elegant number like Bosworth's comes along and makes you forget that you were ever mad about not being able to carry around your entire lipstick collection in the first place.

Who needs to pack all that stuff around anyway when they've got a stylish sidekick in hand? Now that you know the tiny bag trend is here to stay, it's time for you to start thinking about making the investment, and Bosworth's no-frills bag is the perfect place to start.

Ahead, The Zoe Report's favorite Kate Bosworth-inspired micro bags to introduce to your wardrobe ASAP.

This croc-effect tote employs another on-trend material, too: transparent PVC. Encased in a see-through pouch, the mini off-white accessory will pair well with all of your winter ensembles.

Add some color to your bag collection with this sky-blue mini tote. Like Bosworth's, the bag features a fold-over flap and comes with a detachable shoulder strap, too.

Loving the latest animal print trend? This tiny snakeskin-effect tote is right up your alley, then, featuring metallic gold details and clean lines.

A bolder version of Bosworth's bag, this glossy croc-effect tote features a dainty wristlet strap with a chestnut-colored resin sphere at its base.