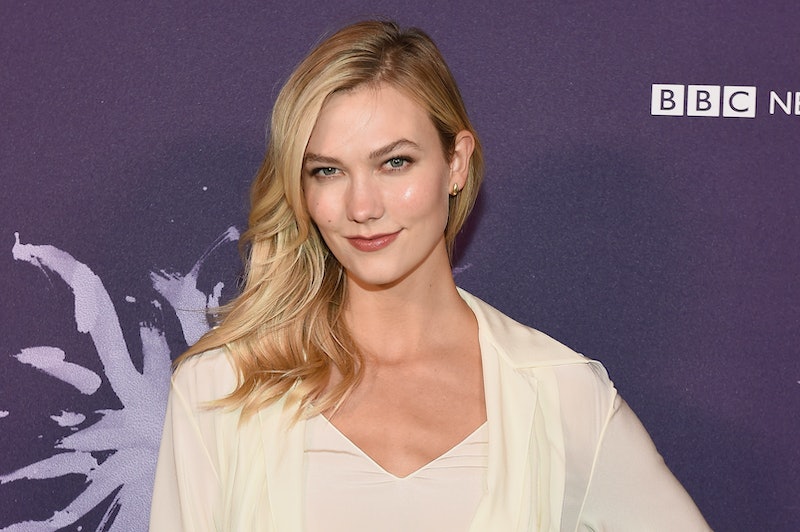 Karlie Kloss just got a major chop. The model must be feeling lighter as she takes on the start of New York Fashion Week because, as her latest Instagram story has revealed, she said goodbye to seven inches of hair. Disclaimer: Karlie Kloss' lob haircut could send you running to the salon.

The runway veteran is known for her long blonde hair, but in the Instagram story she posted on Thurs., a big portion of it had suddenly disappeared. Not to worry, though: the shorter style looks even better than before. Just after Kloss debuted her bouncy shoulder-grazing cut on social media, her hairstylist, Harry Josh, also took to Instagram to show off his work.

"Scissor happy week. Another big cut this time on @karliekloss," the celebrity stylist wrote, tagging #newyearnewhair #haircutbully on the post. Earlier in the week, Josh took his shears to fellow supermodel Candice Swanepoel, stopping just below the shoulder.

Kloss' new look is, however, inarguably a much more dramatic change. She took it out for a spin at Wed.'s Tom Ford Fall/Winter 2019 fashion show, sporting it down in natural-looking waves. Then, the 26-year-old showed it off again at Thurs. morning's Ralph Lauren show.

"Holy moly," Kloss says in the Instagram video, continuing on to claim that Josh talked her "off a ledge" and into cutting seven inches of her hair off. It's no wonder she trusted his expertise, though, considering his extensive roster of celebrity clientele (Olivia Wilde, Kate Bosworth, Cindy Crawford, and more).

Just last month, Josh prepared Irina Shayk for the Golden Globes red carpet by cutting her long chestnut hair to her chin. Apparently, Shayk wasn't the only one ready for a change in 2019. Kloss shook out her fresh lob in the video with a carefree "new year, new me."

Other major hair changes of the year so far include Emma Stone going brunette and Allison Williams going blonde, not to mention the brand-new emerging bang trend. Kim Kardashian, Kendall Jenner, and Bella Hadid have all debuted bold fringe within recent weeks.

Although much shorter than it was mere days ago, Kloss' makeover is subtle and safe. If you're ever in need of a refresh, you simply can't go wrong with a lob.

Feeling inspired by the model's new haircut? Book yourself an appointment with your hairstylist immediately and stock your vanity with these short hair-approved products, ahead.