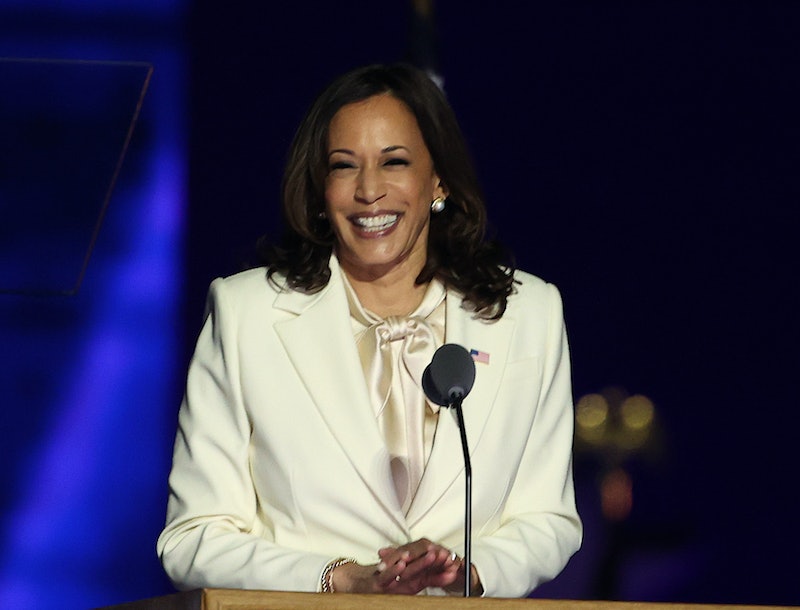 Former Vice President Joe Biden and Senator Kamala Harris were declared winners of the 2020 Presidential Election on November 7 — a win that will make Harris not only the first female Vice President, but also the first Vice President of Black and South Asian descent. Though we know Harris primarily as a political professional, she may be reputably building herself up as something as a style icon in her own right. Considering alone the crisp pantsuit she wore to take the stage in Delaware for her first speech as Vice President-Elect on Saturday, it’s no wonder Kamala Harris’ outfits keep going viral.

For starters, the tailored, white Carolina Herrera suit Harris wore on Saturday was — beyond a suit — a symbol. Vice President-Elect's declaration falls just a few months after the 100th year anniversary of the 19th Amendment ratification to the Constitution, which gave women the right to vote in the United States. The color white has, since then, been closely associated with the women’s suffrage movement. Harris’ suit of choice also sends a nod to Shirley Chisholm who, in the year 1968, wore all white when she became the first African-American woman to be elected to Congress, and to Hilary Clinton who also wore white when accepting her Presidential nomination in 2016.

That Harris chose to appear in a pantsuit at all comes as no surprise, as this may be the most prominent element of the Senator’s wardrobe. Donning the look often in neutral and warm toned shades such as navy blue and burgundy, Harris often pairs her signature suits with a matching satin camisole, other times dressing down the look with the likes of a white T-shirt. As Harris and Biden have hopped from city to city on the Presidential campaign trail, many of us have become more than familiar with her political agenda, and just as familiar with her style preferences. For instance, alongside the pantsuit, Harris appears to have two other undeniable go-to’s (and one of them is rather casual) — Converse tennis shoes and a pearl necklace, likely a nod to her ties to the Alpha Kappa Alpha sorority. Timberland boots and a bedazzled denim jacket are other items that seem to have made the cut.

If the buzz over Harris’ victory speech suit is any indication, we can expect more attention on her ensembles in the months to come. For now, here’s 10 of the Vice President-Elect’s best looks thus far —pantsuits, Chuck Taylor’s and all. And in case you were wondering, yes, they're pretty easy to recreate with alternatives.

November 7, 2020: Wearing a white Carolina Herrera suit, Harris joins Biden in Wilmington, Delaware to address the nation after being declared winners of the 2020 Presidential Election.

October 31, 2020: Though we've seen Harris often wearing low-top iterations of the signature Converse style, she went for a custom 2020-graphic high-top style for a campaign stop at Buccaneer Park in Florida.

November 3, 2020: Harris wears a classic black turtleneck and black booties while in Michigan on Election Day.