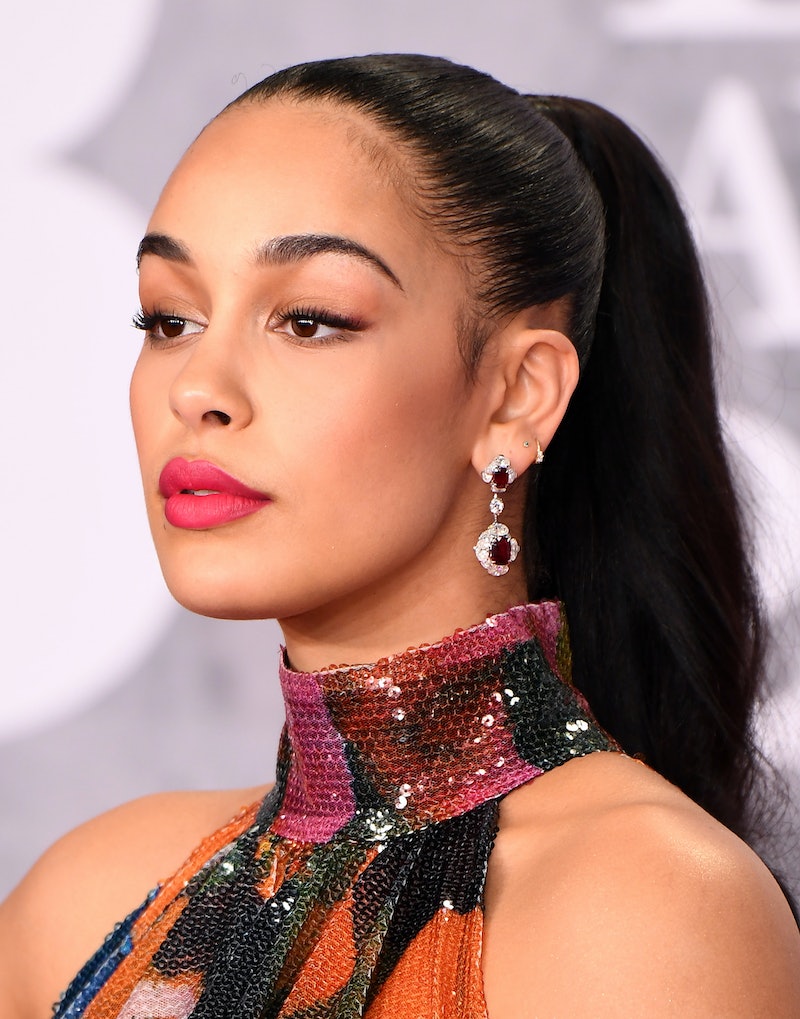 Just over a year after the release of Jorja Smith's debut studio album, Lost & Found, the U.K.-born songstress is staying true to her trendsetting ways with look after jaw-dropping look, courtesy of stylist Leah Abbott. The 22-year-old's Instagram grid is chock-full of style inspiration showcasing a marriage of old Hollywood glamour and street-smart flair, and her latest OOTD backed one energetic trend that doesn't seem to be losing steam: neon green. Jorja Smith's green mini dress, which she wore onstage at the 2019 Lowlands Festival in the Netherlands, was yet another testament to the fact that chartreuse was made for the Grammy-nominated singer. Featuring a single spaghetti strap and an airbrushed graphic motif, the eye-catching number was offset by sleek white sneakers and thick gold hoops.

With her jet black waves cascading down from a sleek high pony, the R&B crooner kept her makeup minimal per usual, with cat-eyeliner and a matte nude lip. The moody photographs shot on film by Michaela Quan were a dreamy addition to the singer's swoon-worthy collection, and served as a perfectly good reason not to ditch your yellow-green statement pieces just yet.

Whether the Blue Lights singer is hitting the stage or walking the red carpet, the world can always depend on a head-turning ensemble. While she usually opts for a form-fitting midi dress or a satin knee-length number, Smith isn't above an occasional sweatpants mirror selfie — proving she hasn't let her quick rise to fame get to her. And while you may not be hitting a festival stage anytime soon, Smith's swanky eveningwear aesthetic deserves a spot on your style mood board.

If you've got a birthday bash or a ritzy date penciled into your calendar in the coming months, it's probably a good idea to arm yourself with a Jorja-inspired gown. Ahead, The Zoe Report sourced gorgeous green gowns that will keep the daring trend going strong.

This ruched mini dress does all of the heavy lifting, so all you need is a bedazzled choker and strappy heels to make a serious impact.

Aside from that emerald green hue, the cowl neck and snake-print has Jorja written all over it.

There's never a bad time for asymmetry, and this puff-sleeved mini dress is equal parts cool and glamorous.

Now's the time to give tie-dye a whirl, so why not start with this classic midi slip dress?

This satin midi silhouette is about as classic as it gets, but the chartreuse hue feels so right now.

Go bold and take the tiger-print trend for a spin.