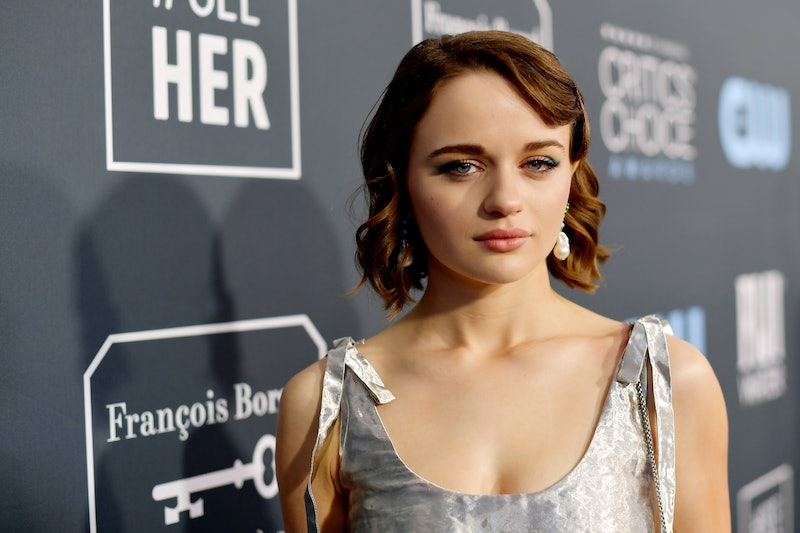 Joey King hasn't had the best of luck this awards season—she left the Golden Globes with a bruised head after Patricia Arquette accidentally knocked her with the award, itself, then a week later, her zipper broke on the way to the red carpet — but she's looked darn good through it all, for what it's worth. She earned herself a spot on every best dressed list again on Sun., wearing a metallic Prada number and the coolest manicure to match. Joey King's nails at the Critics' Choice Awards enhanced the futuristic feel of her dress.

Sequins and metallics had a major red-carpet moment at Barker Hangar this past weekend. Critics' Choice nominees Charlize Theron, Florence Pugh, and Anne Hathaway were all sparkling, as was this year's breakthrough actor, Joey King. Her silver Prada gown was a little less hypnotizing than the complex Iris van Herpen dress she wore to the Golden Globes, but her nail art was no less trippy.

Manicurist Thuy Nguyen (who has worked her magic on Lucy Hale, Awkwafina, Vanessa Hudgens, and more) was responsible for King's geometric nails then and she's responsible for her futuristic nails now.

She used a combination of Essie's Fairy Taylor and Of Corset, two pinkish-nude sheer shades from the Gel Couture line for the base color, then she added a funky design to it, of course. Using thin strips of metallic silver nail tape, she created a different look for every nail. It was both avant-garde and subtle, making for the perfect accessory to complement that Prada dress.

King's manicure was on show as she held her equally shiny shoulder bag—full of Good & Plenty candy because she's hungry just like the rest of us—close. Now that she has debuted one wild manicure per week, you'll want to pay special attention to whatever masterpieces adorn her nails come the upcoming Screen Actors Guild Awards.

Until then, you can try to recreate them using three simple drugstore polishes and a roll of nail tape. Ahead, an exact step-by-step from King's manicurist, herself.

First, you'll want to create the base color: a sort of nude with pink undertones. Nguyen used two Essie shades for this, starting with Fairy Tailor.

Layer this more neutral shade on top of Fairy Tailor and watch the colors combine into a pretty shade of pale pink.

Play around with your nail tape, creating geometric designs in different directions on every nail.

Secure your nail art with a trusty top coat that'll magnify the shine.