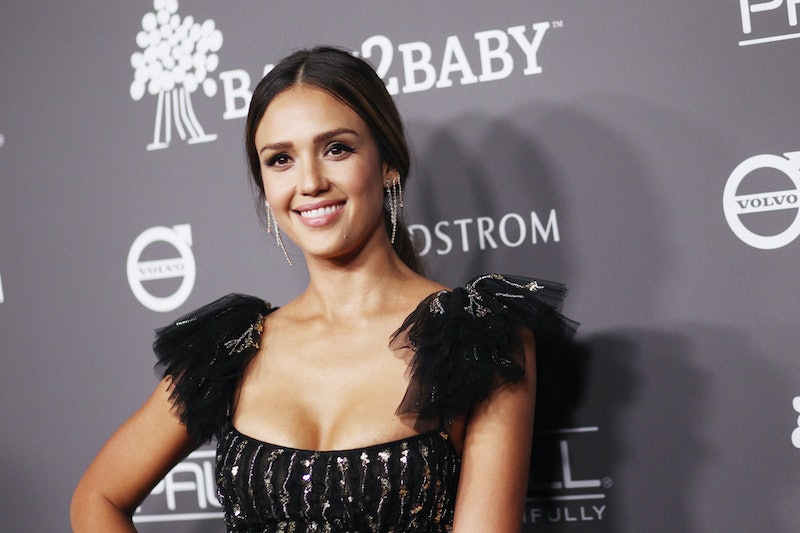 The suit craze that dominated this past winter apparently won't be going out of style anytime soon. There is a rule, however, for summer separates. It's all about monochromatic white, according to Jessica Alba's suit and heels.

On Thurs., the actor and her L.A.'s Finest costar Gabrielle Union were spotted entering Global Radio Studios in London, where they were featured on the Heart Breakfast morning show. It might not have been a televised appearance, but the ever-chic duo still took the opportunity to flaunt their impeccable styles.

While Union debuted a colorful rust-colored combo by Rosie Assoulin, Alba opted for an all-white ensemble that was so quintessentially summer. Her neutral power suit consisted of a longline, double-breasted blazer with tortoiseshell buttons that matched her Celine hoop earrings perfectly and a flowy pair of high-waisted, wide-leg pants. Hailing from Opening Ceremony's eccentric Fall 2019 lineup, the actor's outfit isn't available yet (don't worry, there are plenty of copycat versions to choose from).

Adhering to the whole casual summer vibe, Alba's undershirt was one of those basic heather-gray, scoop neck tees that you probably have a dozen of already, and her hair was down in beachy, natural-looking curls.

If this isn't the epitome of a summer suit, then none exists.

Her fuchsia pout was the only pop of color, which was a statement in itself. And as for the accessories, she carried a camel leather shoulder bag by Ralph Lauren and wore white pumps by Jimmy Choo.

Alba's smart suit moment is proof that you can continue wearing your beloved sets all summer as long as they obey the warm-weather color scheme, and all-white-everything certainly does. Take it from the ultimate trendsetters Gigi and Bella Hadid, whose matching monochromatic white ensembles in Italy are further evidence.

Add a Jessica Alba-inspired white suit to your work rotation immediately. A few of The Zoe Report's favorites, ahead.

Recreate the actor's outfit with these slouchy, straight-leg pants and corresponding drapey blazer. Layer it over a cozy tee and complete the outfit with white pumps for the full look.

Not a fan of the wide leg? Opt for something slightly more structured on the bottom with these cigarette-cut pants.

If you're looking for a more polished suit for the office, the clean lines on this crisp white suit will do the trick.