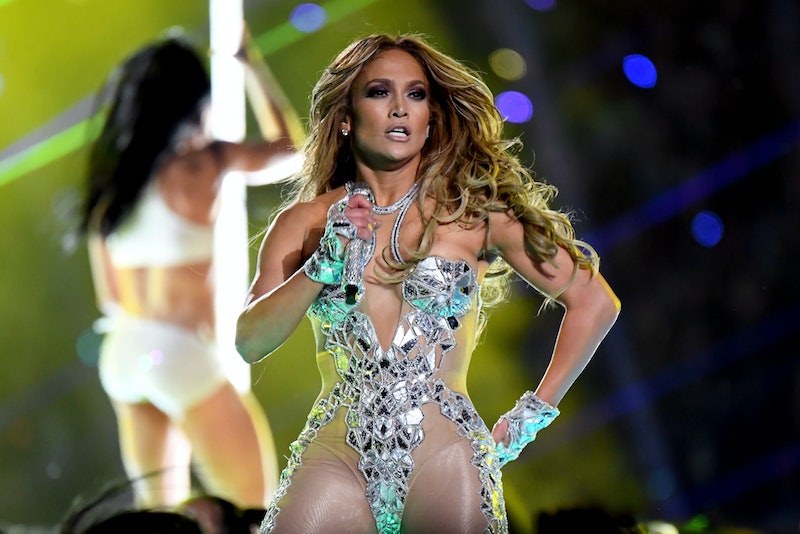 Arguably the best part of the Super Bowl, the halftime show has given us a star-studded lineup for years now. And while last night was no different, between two halves of football, was an electrifying performance from J.Lo and Shakira that had everyone dancing. And adding to the show's wow factor were Jennifer Lopez's Super Bowl outfits. Never one to shy away from a head-turning look, the songstress changed into three equally eye-catching custom Versace ensembles for the jaw-dropping mini-concert. But, she didn't stop there, the 50-year-old continued to glisten post-performance in another standout look that you don't want to miss — but more on that later.

Performing some of her greatest hits, J.Lo opened up her medley with "Jenny From The Block" in a black leather biker look that Versace notes on its Instagram to be embellished with thousands of studs and Swarovski crystals as well as Medusa accents. She kicked off the number wearing a pink silk satin maxi skirt that she then tore off to reveal the full look for her next song. After a quick change, Lopez strutted onto the stage (and then showed off her pole dancing moves from her film Hustlers) in a nude illusion, full-body catsuit that featured Swarovski crystals and silver leather in a mosaic pattern. The shimmering costume, which according to Versace took over 700 hours to complete, was topped off with matching gloves and ankle boots.

Lopez then joined her daughter Emme on stage in a mesh-metal and Swarovski crystal fringe bodysuit with leather bondage-inspired belts and a feathered cape. The cape, which had the American flag on one side and the Puerto Rican flag on the other, is noted by Lopez's stylist, Mariel Haenn, to have 40,000 feathers individually sewn on to it. On the American flag each star has 40 Swarovski crystals, while Puerto Rico's star has 2,000 crystals that were all individually placed.

Even after hitting her final note of the night, J.Lo was still sporting sparkle. The star was photographed wearing an oversized white topper over a shimmering nude top and embellished jeans while walking with fiancé Alex Rodriguez by Miami's Hard Rock Stadium. Lopez accessorized her chic after-show outfit with a pair of statement hoops, sparkly shoes, and a gleaming clutch.

Of course, you can't mention any of J.Lo's Super Bowl looks without noting her enviable bouncy curls. Her voluminous, golden-hued locks made waves on social media from the moment she hit the stage. So, unsurprisingly, she continued to show off her curled tresses for the rest of the night.