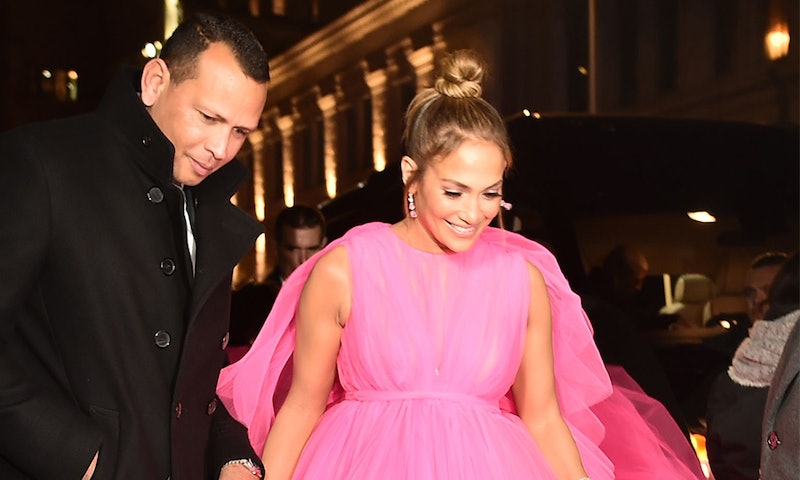 With holiday premiere season in full swing, Hollywood's fashion darlings are stepping out dressed to the nines for red carpets and star-studded events, and they're dripping in drama. Jennifer Lopez's pink dress turned heads on Wed. night, as the triple threat arrived in New York City for the premiere of her upcoming film, Second Act. With almost thirty years in entertainment under her belt, the industry powerhouse still manages to serve stunning looks time and time again, and this daring moment was one of her most iconic yet.

The voluminous fuchsia number made a serious splash, with its long, tulle train trailing behind Lopez on the carpet. The couture gown from Giambattista Valli's Fall ’18 Haute Couture collection was in line with the designer's over-the-top, pillowy silhouettes, but the eye-catching hue took things to a whole new level. J. Lo isn't the only A-lister who's opted for a princess dress by the Italian designer. Who could forget Rihanna in that iconic pink cupcake dress at the 2015 Grammy Awards? Kendall Jenner was also dressed by Valli at the 2018 Golden Globes, as she stood in solidarity with the #MeToo movement in an all-black number with just as much volume as Lopez's.

To avoid competing with the gown's lavish silhouette, Lopez pulled her golden locks into a sleek, twisted topknot, showcasing flawless skin with bronzy cheeks and a glossy nude lip. Two undone tendrils fell on each side of the ballerina-esque hairstyle, which was finished off with dangly diamond earrings. The 49-year-old was joined on the carpet by her beau, Alex Rodriguez, who adorably grasped her hand as they posed for photos.

Does this unapologetically extra moment have you considering additional drama for an upcoming event? Even if you don't go with a tulle gown that fills up your entire Uber, deciding on an eye-catching color is a great move this season. More is more when it comes to color right now, so why not channel Lopez and enjoy a fuchsia moment? Ahead, The Zoe Report's round up statement dresses that are the 2019 definition of pretty in pink.

You can never have enough slip dresses, and the best thing about this open-back style is you can easily layer a turtleneck underneath if the vibe is less formal.

Channel the the '60s and '70s with this retro, silk-blend shift dress that will look so chic with pumps or ankle boots.

Stand out like a technicolor Greek goddess in this floor-length gown with an elegant, asymmetrical neckline and romantic flutter sleeve.

This neon-pink midi dress with balloon sleeves is so unique, and works for day and night alike. Pair it with knee-high boots and a statement handbag for an undeniably winning look.