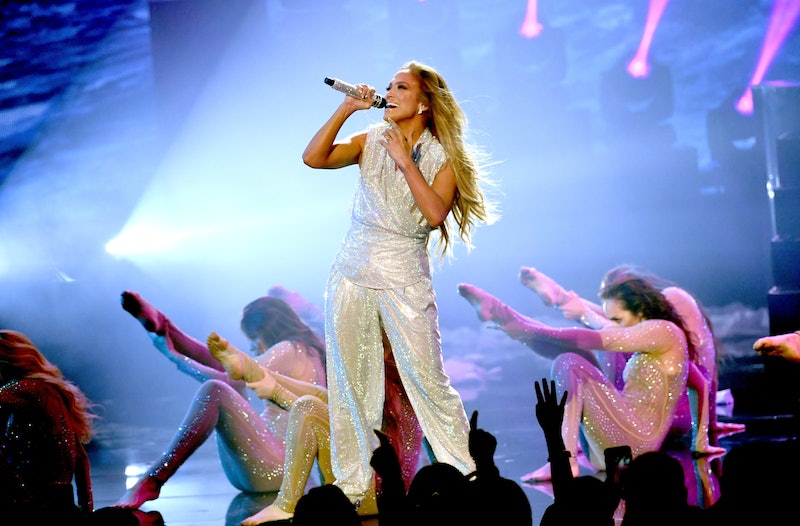 A whole 20 years after her first single was released, Jennifer Lopez is still holding her own on the pop charts. These days, though, she's churning out soundtracks for films she also acts in (she's multitalented like that). Jennifer Lopez just dropped a new music video for "Limitless," and the 49-year-old looks so stylish in it.

J. Lo has been busy promoting her new film, Second Act, lately. Between press engagements, she was apparently working on a new music video for the song she recorded for the movie, too. On Thurs., the "Limitless" video dropped, and it features Lopez dancing like it's 1999 again in a fiery red suit.

Lopez has been sporting monochromatic looks nonstop lately, and her latest is no different. Her power suit matched the inspirational feel of the video, which features her dancing between rows of suit-clad people while wearing a V-neck blazer and matching pencil-leg trousers. The trendy wrap-style blazer is cinched with a glossy tie belt at the waist, descending into a flowy, asymmetric hem. While structured, the top was also movable enough for Lopez to squeeze in a few of her signature hair flips.

Completing the eye-catching look, the singer wore sleek heeled boots in the same scarlet color and bright lipstick to match.

Bright colors seem to be the running theme of J. Lo's looks this season. On Dec. 14, she wore head-to-toe orange (lip color included) to the set of Despierta America in Miami and, on the same day, visited Telemundo's Un Nuevo Dia in a bright-yellow dress. For the world premiere of Second Act in New York, she opted for the most over-the-top bubblegum-pink layered tulle gown.

Thus, it's no surprise that the "Love Don't Cost a Thing" singer went full-on candy-apple red for her new music video, which also stars her adorable 10-year-old daughter, Emme, as Lopez's younger self.

If J. Lo's red suit makes you want to do a hair flip, too, then check out these similar sets curated by The Zoe Report, ahead.

The ultimate power blazer, this sophisticated number is defined by a single oversized black button.

The wide-ring belt on the side of these trousers gives it an asymmetric feel similar to J. Lo's blazer.

This blazer is loose and flowy, with extra-long lapels and a concealed hook closure.

Complete the monochromatic look with these matching cropped trousers, which feature a satin stripe up the side.

These ruby-red trousers will give you the most stylish wide-leg silhouette.