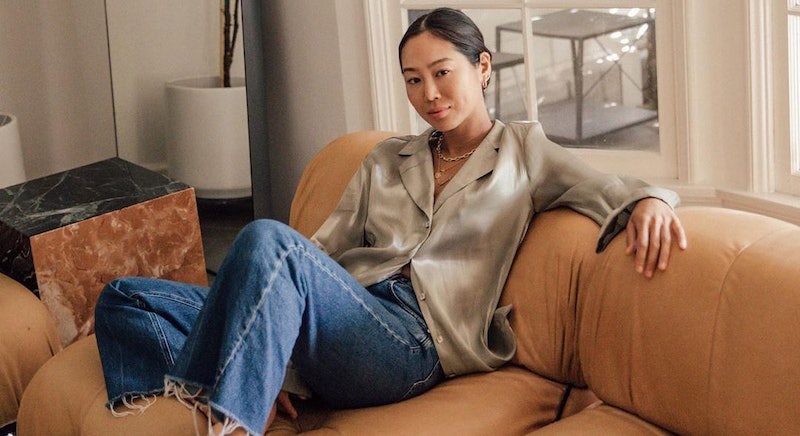 The CDC documented the United States' first coronavirus case eight months ago, on January 21. But it was March 12 that one may say the pandemic officially hit — when, within the span of a few hours, the White House halted travel from Europe, the NBA suspended its season, and Tom Hanks announced that he and his wife, Rita Wilson, had been infected. That same day, too, an Instagram account with the handle @wfhfits, a homage to the work from home style of fashionable people around the globe, joined the internet. Its first post? A fitting “Something’s Gotta Give” screen grab featuring Diane Keaton sobbing at her 2003 Apple PowerBook. The handle quickly became an internet depot for users to both submit mirror photos of their early-quarantine looks, as well as browse the looks of others.

In those early days, the page was also an exploration into comfort, and just how cozy consumers were willing to go during the technical workday; quilted sweatpants, jazzy leggings, and the newly-minted house dress were all well-represented through March and April. But on August 27, five months into various stay-at-home orders and two into New York City’s Phase 2 reopening, @wfhfits stopped posting.

Maybe the novelty had simply worn off, or maybe shoppers had all figured out what works and what doesn’t as they dress for hours of Zoom calls at their itty-bitty dining tables, no longer seeking Instagram-rendered outfit inspiration for the monotony of it all. Or maybe still, as New York Times fashion director Vanessa Friedman surmised last month, the world’s workforce is all still figuring out what comes after months in sweats.

“In the same way that smartphones have made it possible to work at all places and all times, just because you can wear your stretchy old workout gear in front of the computer, doesn’t always make it a good idea,” she wrote for an essay of sorts titled “Behold, ‘Workleisure.’” “I am beginning to believe I can feel my mind getting flabby and fraying around the edges — along with the frayed edges of my T-shirts.”

As Friedman noted in her piece, the term “workleisure” wasn’t invented in this current health crisis, but instead rather unsuccessfully several years ago to describe those clothes that meld practicality with more traditional business attire. The name didn’t catch on, despite the fact that consumers were already embracing a more comfortable work wardrobe. Consider a blouse that’s aesthetically appropriate enough for your Zoom meetings, but only you know it’s made of cushy, machine-washable nylon. Psychologically, Friedman is right: That blouse may actually make you more productive than your rattiest college crewneck, and therein lies the decades-old appeal of dressing up.

Dr. Dawnn Karen, dubbed “the world’s first fashion psychologist,” calls this “Mood Enhancement Theory” — the dresser can deliberately select clothing to optimize performance based on overall mindset. In her work with clients, Karen will write sartorial prescriptions based on how individuals are feeling to help create better alignment between external and, eventually, internal motivators.

Karen shares the case study of one recent client, a physician, who was emotionally exhausted due to her ongoing work with high-risk COVID-19 patients. "For this particular circumstance," says Karen, "I actually prescribed her to wear the color yellow because it signifies vitality and cheerfulness. She hates the color, but she found a way to incorporate it under her white coat and even in one of her facial masks." It instantly boosted her mood.

“This is actually the foundation of the fashion psychology field, being mindful when you dress instead of just throwing on something, being very intentional,” says Karen, who founded the Fashion Psychology Institute, authored a book, Dress Your Best Life, and also works as a professor at the Fashion Institute of Technology. “Maybe the client has an individual experience with a particular fabric, or maybe leopard print will make someone feel ferocious. You can't work in your pajamas and expect to be productive.” When Karen says pajamas, she does, in fact, mean that literally. But to her logic, tying clothing to productivity will mean something different for different people. It could go as far as sitting in your kitchen in heels, or be as simple as putting on Lycra leggings that embody absolute, utter comfort — though that hasn't always jived with conventional office standards.

In the U.S., workplaces have tended towards more formalized dress codes, with expectations often based on profession, reported working class, and social expectation, but also the social and political norms of the day. In the early part of the 20th century, businessmen were expected to wear full, many-pieced suits while women — or those able to work in an office environment, or work, period — cloaked their legs in long dresses or skirts. But in the post-war 1940s, as more women entered the workforce, the Rosie-the Riveter-era “utility fashion” stuck around by way of boxier cuts and shorter hemlines. By the 1960s, fashion trends like “mod” began trickling into business attire, and by the 1970s, menswear-inspired suiting grew as an emblem of second-wave feminism. Gradually, the world was growing much more casual — by the 1980s, few dressed to the nines for the glamour of airline travel, as was once customary — and the office uniform also began to relax. The “business casual” of the 1980s and 1990s set the stage for workleisure as it is known it today.

Still, though: Even apparel experts don’t know how to define workleisure all that well, and that’s not only because the category has changed so rapidly since March 12. Consumers are just trying to figure out not only how they work, but also how they live more holistically. People’s professional lives are but one piece in the much wider and more complex pandemic jigsaw. It’s no wonder there's no one prescriptive style solution to assuage not only consumers’ overall sense of health and wellbeing, but how their clothing choices factor into the present need for comfort and practicality.

In April, for instance, The Zoe Report asked 45 designers to describe their work-from-home outfits. The result was about as eclectic as you’d imagine when polling tens of creatives about how a pandemic may have shifted their most intimate form of self expression. Take Sade Mims, founder and designer of New York City-based accessories label Edas, who was most often “wearing a loose blouse or an oversized button-down, accompanied by underwear or biker shorts below.”

Today, her everyday sartorial tendencies themselves haven’t changed all that much — but what has shifted is the overall objective with which she wears them. Which is where Karen’s Mood Enhancement Theory comes in: The pandemic has starved people of both interpersonal intimacy and the kind of comfort that's really only granted through physical safety. So clothes that recall positive memories or generate optimistic experiences — so-called “joy triggers” — are becoming more needed than initially realized. Data shows that nearly half of Americans find the coronavirus crisis is harming their mental health. As of May, online-therapy company Talkspace reported a 65% leap in clients since mid-February. Clothing can be used to cope.

“At the beginning of quarantine, I wanted to keep those daily practices that brought me joy alive,” says Mims. “So getting dressed while staying relatively comfortable was key. I’m still wearing things that make me happy, like a simple hoop or even a silk blouse, those things haven't changed and that feels good.”

Mims' current method can be described as dressing-for-the-Zoom, if you will, infusing elements of wardrobe normalcy — a tiered midi dress, a pair of printed trousers — alongside overarching cozy pieces. And in a sense, isn't that what workleisure is all about?

In some fields, though, this “new normal” is not exactly dissimilar from the way closets were in pre-pandemic times. Wall Street, for instance, is starting to get back to work, with the Wall Street Journal reporting that JPMorgan Chase’s sales and trading teams are expected back in the office this month. Will the bank’s top brass show up in anything but starched suiting? In all likelihood, no. But what about the rest of the working world, and creatives particularly?

“Workwear will be more relaxed, whether we ever go back to a physical establishment again or stay within our homes,” says Karen. “Now people will be dressing for functionality and safety. If we do continue to stay home, it'll be about flexibility. No one wants to be in some stiff suit, so it'll be about just how comfortable this outfit is.”

To be sure, it’s not the suit itself that Karen deems to be the issue, but instead the lack of comfort that a freshly-pressed pencil skirt may present while working from one’s home office. So when Karen says flexibility, she means so almost literally — utilizing easy-to-wear garments that still convey the professionalism still required, no matter the location of our workspaces. Employees can recreate the power of a suit, but this time with elastic waistbands and plush, stretchy fibers that make today’s office culture remotely tolerable.

It’s difficult, if not impossible, to speculate on what kind of workleisure will appear on an account like @wfhfits six months from now, which would mark a year of the work-from-home lifestyle. The planet, really, is still just taking it day by day, and in a psychological sense, that’s all for which working people really have the bandwidth. “People will be much more accepting and less judgmental of what we wear to work, as long as you can get your job done effectively,” adds Karen. Even your most frayed T-shirt goes.