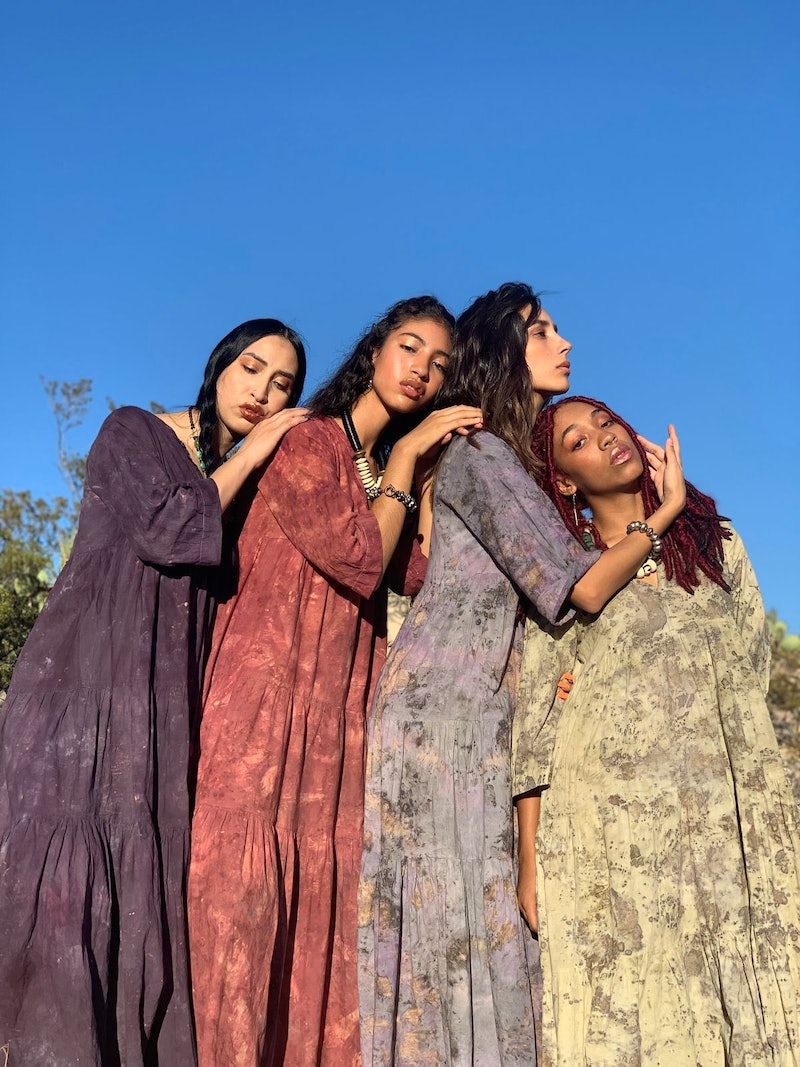 For women in Ciudad Juárez, a Mexican border town near El Paso, Texas, finding a safe and supportive work environment isn't a guarantee. "There is work for women in Ciudad Juárez, but many jobs offered are based on exploitation, cheap labor, and the feminization of work," Jane Terrazas, a local textile artist and activist tells TZR. She's also a co-founder of NI EN MORE, a non-profit social innovation project, which unifies political activism, fashion, and art by employing women there.

"In Juárez the neoliberal economic system was implemented through the border industrialization plan in the '80s, and this led to the massive hiring of women and the creation of a feminized proletariat," Terrazas explains. "This coupled with the violent conditions of public space, misogyny rooted in the Mexican culture, corruption in government institutions mainly in the justice system, racism, classism, and the strong presence of drug cartels on this border, placed working class women in a condition of total vulnerability." Terrazas along with her co-founders human rights activist Veronica Corchado and Lise Bjorne Linnert (also a textile artist) all experienced this in some way.

Both Terrazas and Corchado grew up in Juárez, while Linnert first learned about the high rates of femicide there while living in Houston in 2000. In 2006, Linnert initiated a long term global art project to raise awareness around the violence against women in Juárez, traveling back and forth to the city for many years. Ten years later, Linnert met Terrazas and the two talked about building something together that would create opportunity for women living in the most vulnerable areas of Juárez. The result: NI EN MORE was born.

The name NI EN MORE is a blend of Spanish, Norwegian, and English meaning not one more. "Our main goal is to create a sustainable business model for the production of clothes," Terrazas says. "This will allow us to create jobs that not only will provide dignity, [and a] sustainable and fair income to our team, but also will help to create confidence and skills that contribute to long term financial independence." She adds that their hope was to counter fast fashion factories with a different model of production while utilizing the knowledge of the community. "Many women also come with some basic skills in sewing," Terrazas says.

While traditional factories generally assign one person to a single job, every worker at NI EN MORE is instructed on how to perform each step in the production process. "That way, they’ll have a greater depth of knowledge into the craft as a whole," Terrazas notes, adding that they also teach workshops on subjects necessary for running a small business like sales strategies and social media along with support groups. By doing this, the women are learning more than just how to sew, they have economic autonomy and will also be able to take away valuable skills that can be used throughout their career.

To ensure ultimate safety for the workers, the women work six hours a day, and they never go to or from work when it's dark out. "These working hours let them follow up their children and families in a much better way," Linnert notes. "In the Maquiladoras [factories], the workers have 12 hours shift and the production is 24 hours a day." Additionally, the minimum salary in the maquiladoras is 185.56 pesos per day for eight hours of work, however, NI EN MORE start paying a minimum of 250 pesos per day for six hours of work.

In addition to using local labor, the brand works to source materials locally. To create the garments, natural dyes made with plants and flowers from the nearby Chihuahua district are used along with organic cotton, silk, and linen. Some of these materials are recycled, while others are donated from designers such as New York-based label Samuel Snider. The non-profit isn't mass produced, instead it focuses on small batches of around 30 to 40 garments per week. "We prioritize higher quality materials, workmanship, and the empowerment of workers through this broadened skill-set," Terrazas says. The linen comes from a small social enterprise that collaborates with woman artisans in Mexico.

On March 8, a sewing studio opened in the Raramuri tribal community, allowing local women to be able to work in their neighborhoods without traveling long distances for work, allowing for more time with their family and opening more work opportunities for women who would otherwise be unable to go into a factory.

NI EN MORE is operating with the help of crowdfunding and government funding for specific programs, along with donations, volunteer work, and income from its sales. And, the pandemic has hit the project hard due to difficulties with the supply chain. "Due to the pandemic, the border to the United States has been closed and we have had problems getting the pieces out," Terrazas says. "Friends of the studio that have been allowed to cross have helped us." And as the team members had to work from home, production has slowed down. Because of these obstacles, there's currently a Go Fund Me campaign in addition to the retail site.

Below, support NI EN MORE by shopping some of its selection of dresses, tees, bags, scrunchies, and masks.