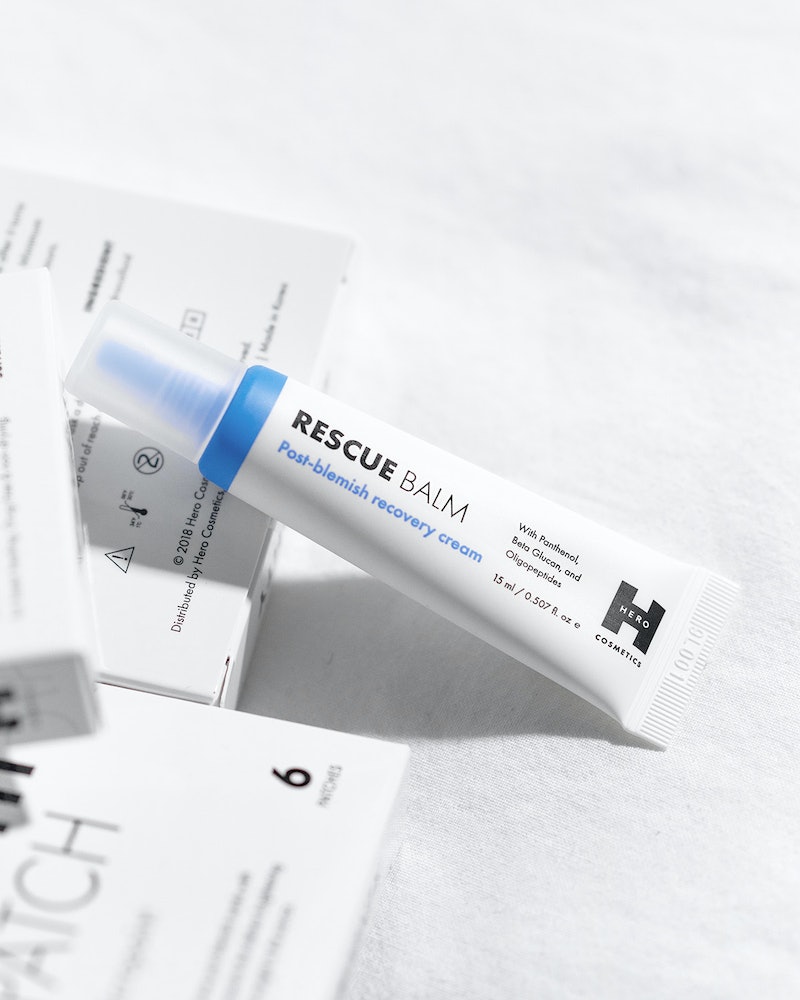 Despite how many times you've heard dermatologists warn against popping pimples, there will always be that one blemish that pushes you over the edge. And what then? You race to the medicine cabinet and grab the Neosporin, but even that can have consequences. Meet Hero Cosmetics' new Rescue Balm: the post-acne treatment you didn't knew you needed.

Now don't take this as permission to go on a popping frenzy (seriously, your dermatologist is begging you not to), but for those occasional spots that simply demand to be touched, you should have something handy for the aftermath. The internet has long been torn over whether to use drugstore antibiotic ointments for this purpose — some swear by it while others classify it as an absolute no-no — which is what makes Hero Cosmetics' new launch so important.

The brand's specialty up until now has been acne patches (a pack of which sells every 30 seconds), but on April 6, it launched a cream similar to Neosporin, but more face-friendly. Packed with replenishing peptides, moisture-rich panthenol, beta glucan, vitamin E, and soothing shea butter, Rescue Balm aims to improve the texture, dryness, and redness of a popped pimple. It's also the perfect follow-up to using the Mighty Patch, the brand says.

There aren't a lot of products on the market geared toward the post-popped phase of acne, whether because experts have been so staunch in their "hands off" position or otherwise. Clean & Clear Advantage Popped Pimple Relief Drying Paste is a standout, but instead of drying, Hero Cosmetics' Rescue Balm seeks to moisturize.

Dermatologists maintain that it's important to keep a popped pimple moisturized to prevent it from becoming even more red and scaly, with which a hydrating balm like this can help. After you've done the deed (or after patching, if you're one who has self-control), cleanse and dry your face, then blend a "rice-sized" amount of Rescue Balm onto the affected area, reapplying once or twice per day until the breakout goes away. The vitamin E in it helps to improve the appearance of scarring.

Hero Cosmetics is now sending out acne kits including its new Rescue Balm to medical staff who are battling the COVID-19 crisis after reports recently surfaced of personal protective gear causing breakouts. While the just-launched product is only available at HeroCosmetics.us for now, the brand is also sold by Target, Anthropologie, Neiman Marcus, and other partner retailers.