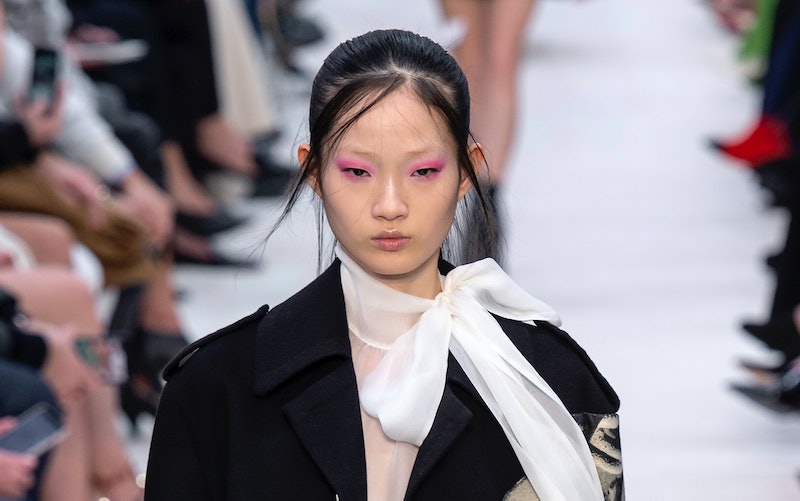 The beauty of Paris Fashion Week, aside from all of the crepes and French coffee served at the catering table, is the fact that even the simplest styles and techniques get a fresh and chic makeover. Your Saturday morning brunch ponytail or the smear of blue eyeshadow that you apply in the back of an Uber, for example, aren't just your daily standbys: They're art now. At both Valentino and Givenchy Fall/Winter 2019 shows, lead hairstylist Guido Palau reimagined hair tendril styling not only as finishing touches to the elegant chignons and ponytails that he created. Those delicate details served as the centerpieces and anchors for the looks — not just details.

Though most models at Valentino wore hats made of wool or lace, a select number were styled by Palau for Redken, who was inspired by "a '70s bourgeois girl," he told reporters backstage at the Sun., March 3 show held at Hôtel National des Invalides. "It's a super '70s chignon blow dried into a knot at the back of the head." Using his "new favorite" Triple Dry 15 Dry Texture Finishing Spray, Palau left "a veil of hair" to separate those wispy bits. "When I'm applying it to tendrils, I want it to separate the hair... so I spray it lightly and dust it off with my fingers," he noted.

Teamed with jewel tone washes of purple, pink, red, and orange matte eyeshadows and layers upon layers of black mascara by Pat McGrath (they were more than likely wearing Fetisheyes), the models were ready to walk the romantically-themed show.

The romance was dead over at Givenchy, held at Jardin des Plantes on March 3, as the look was a bit rougher. "It's a boyish kind of ponytail with a deep side part," Palau noted. "I'm using Satinwear 04 Smoothing Blow Dry Lotion in the hair to blow it, and pulling little bits out [while models are] in the lineup so it feels a little disheveled. It's boyish looks, along with boyish haircuts. It's a masculine and feminine kind of vibe, really."

Once again, the key product for the hair was Triple Dry 15, which he sprayed into the hair to texturize the hair and soften it all, he said. That way, it created a "boyish strength" that still reads very beautiful and luxe. A bit of winged liner, a touch of highlight, and petal-soft natural lips — all by McGrath — rounded the look out, keeping in tune with the androgynous beauty moments that have popped up all week.

As for the side-part styles this season, also seen at Paco Rabanne and Dries Van Noten, Paulau said that he's not sure if it'll be a takeoff trend... but he does note how it can transform an updo. "It sweeps the hair over and changes the base of it," he says. "And instead of [the typical] side part, gives you another [fresh] base which is really nice."

Ahead, shop some of the hero products from both shows to create your own flyaways at home.