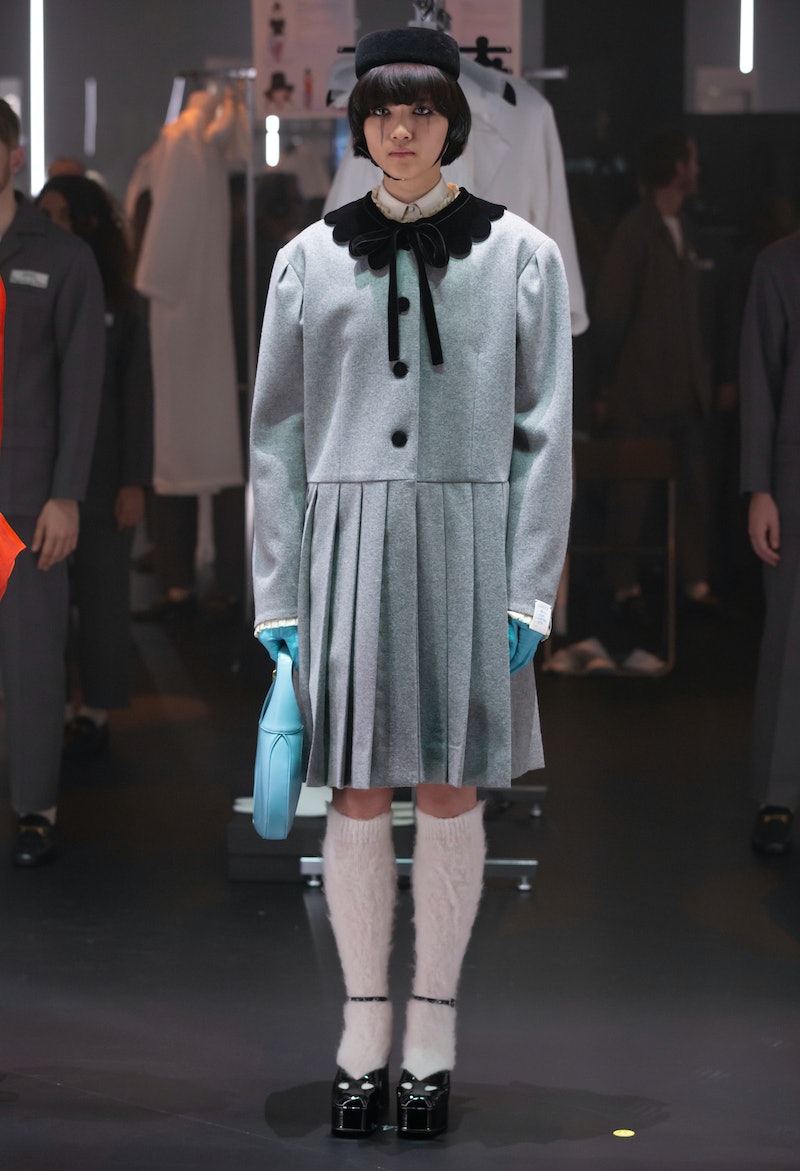 It started with a WhatsApp. Gucci's creative director Alessandro Michele welcomed show-goers to Milan with an invite via the social messaging app. It was a personal touch that peeled back the first curtain, a tiny intimate connection to the collection that was to come. From there, Gucci's Fall/Winter 2020 runway dove straight into the concept of revealing what the fashion house, and its epic runway show are all about.

"I decided to unveil what lies behind the curtains," Michele explained in the show notes. "May the miracle of skillful hands and holding breath come out of the shadows. May that wild and crazy hive that I made my home have a throne." To aid in this intimate peek at what goes into a fashion show, Gucci eschewed a standard runway for a show in the round, watching the models get their makeup done (this season was all about a black-rimmed eye that looked to be running with tears) and get dressed for the event. The behind-the-scenes chaos was all part of the show. In the poetic words of Michele, "There’s something though, in this ceremony, that usually stays buried: the struggle of the parturient that accompanies the tremble of creation; the mother’s womb where poetry blooms, from shape to shape."

The clothes stayed true to Michele's usual drum of design — more is always more. Last season, the collection centered on the ideas of Foucault, meant to shake societal control in favor of a more open-minded viewpoint, mixing leather boudoir pieces with his usual color-clashing separate. This season, the collection held many overt religious overtones, with priest-like robes and rosaries being contrasted with leather minidresses and ripped tights.

The '70s-era staples that have also become key part of Michele's collections were also apparent this season in the form of funky suiting, platform shoes, and a tunic-and-jeans combination that felt like it could have been straight from the knolls of Woodstock. But, Michele also took his references back further with ruffled gowns and minidresses suite for a prep-school student of centuries ago. The references that may in type appear saccharine or overly feminine had a darker connotation when styled with a leather harness, chunky shoes, and the eerie eye makeup of the day.

"Then the lights dim, the cinema screen turns on and the revelation begins," the words of director Federico Fellini streamed over the loudspeaker as the show progressed. For Michele, the show was about more than just the clothing, but in turning those often hidden behind the curtain the chance to play a starring role in his own production. Surely, the bucket bags and platform Mary-Janes will be instant hits among loyal fans, but more than a single must-have piece, this collection is a reminder that Michele considers Gucci to be his cinematic masterpiece.