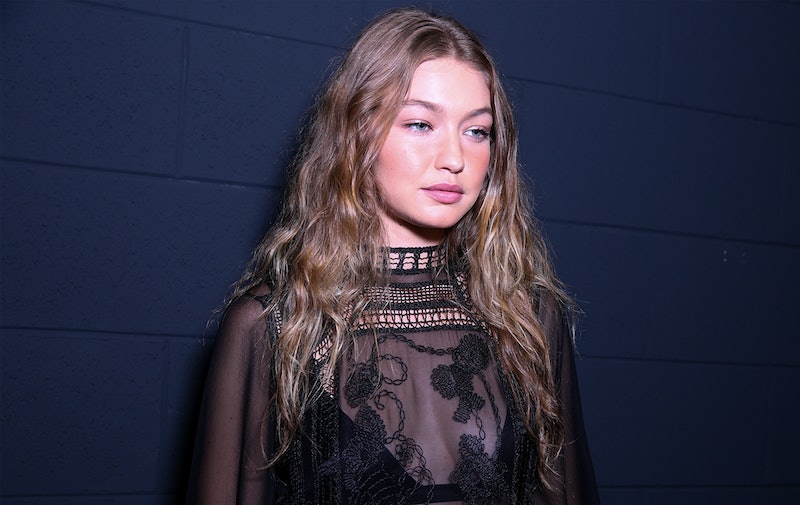 Gigi Hadid has been going nonstop throughout fashion month, gracing the runways of a slew of high-fashion labels, from Lanvin to Versace. On Weds., when she wasn't walking in a show at Paris Fashion Week, the 23-year-old attended Prada's unveiling of its new collection, delivering a brilliant look upon arrival. Hadid floated by as cameras captured her understated outfit, featuring a strapless A-line midi dress from the Italian label's new launch. Styled with patent leather Chelsea boots and visible ankle socks, the structural number was a sophisticated take on the model's low-key street style — but Gigi Hadid's long braid was the clear star of the look.

At first, the slicked-back hairstyle appeared to be a low pony or bun, but the model turned around and revealed a waist-length braid, which cascaded all the way down her back. Courtesy of celebrity hairstylist Jennifer Yepez, the polished hairstyle was in line with Hadid's equestrian past. An elegant departure from the model's signature tousled beach waves, the sleek style showcased Hadid's glowy complexion and understated makeup, and her subtle highlighter and silky strands glistened in the BTS photo posted on Yepez's Instagram.

Even though tousled lobs have recently become an undeniable favorite among everyone from Emily Ratajkowski to Margot Robbie, Hadid's braid goes to show how elegant long hair can be. This sleek, elevated moment is a reminder that super-high ponies aren't the only option when it comes to styling lengthy locks, and it might just have you considering growing yours out or phoning the salon for extensions.

If you're feeling inspired to give the refined look a whirl, you're going to need a few key products first. Before testing out the model's silky smooth update to the traditional braid, add The Zoe Report's product picks to your cart and read the accompanying styling tips, ahead.

Spray this hydrating oil from root to tip at the beginning of your styling routine to achieve that healthy sheen that catches the light just so.

Detangle hair with this professional-quality brush before adding a middle part, then brush closely to your scalp. This will give hair a controlled, glossy finish that's perfect for sleek updos.

After brushing hair tightly against the scalp and securing your braid, you might have a few stubborn flyaways. Control unwanted wispy strands or stubborn baby hairs with this solid oil balm.

Hadid's grown-up spin on the traditional braid is thanks to its ultra-shiny finish, and this favorite among hairstylists will amp up the shine so you're camera ready.

This argan oil-infused hairspray will keep your slicked-back style in place without weighing it down or making it crunchy to the touch.