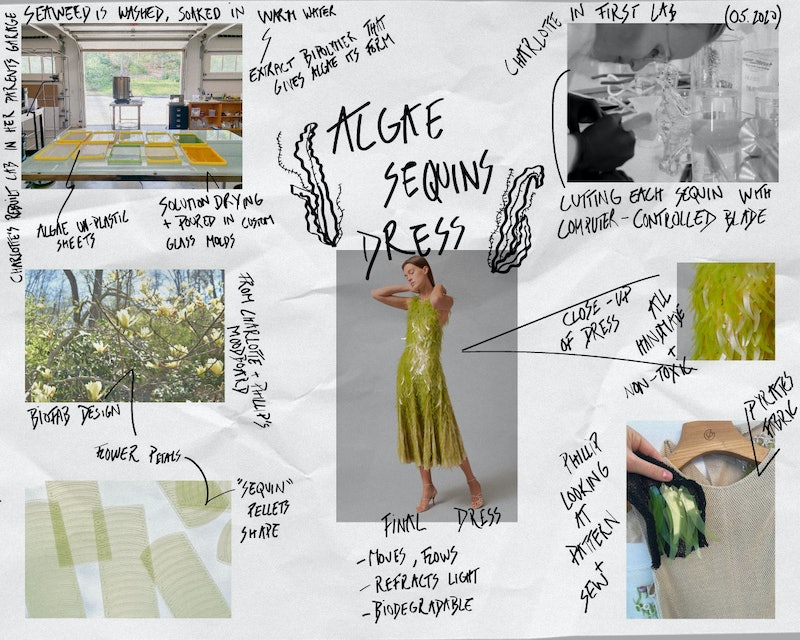 You might be surprised to hear that the most ubiquitous American outfit, a pair of denim and a comfy cotton t-shirt, costs the planet a fortune and contributes to fashion’s environmental racism problem. As it stands, it reportedly takes 3,781 liters of water to make a pair of jeans and 2,700 liters to make a t-shirt, according to a UN report. If the aforementioned favorite tee and jeans were priced according to their environmental cost — tallying water pollution, air pollution, waste, and human rights violations — the two seemingly basic items would be far more expensive than their market cost.

The term environmental racism was defined by civil rights leader Benjamin Chavis in 1982 to define policies and practices that place a higher health burden on people of color. Garment workers, who live predominantly in developing nations, and who according to the World Bank are 80 percent women, are subject to unfair (and often unlivable) wages and unsafe working conditions, especially in poorer areas. Seven of the top 10 clothing exporters in 2019 were in Asia, with China at number one. Under-regulated conditions in the Global South can put laborers at risk, exposing them to toxic fumes, and even puts their lives in danger — a fact discussed after the 2013 Rana Plaza Factory collapse, but that still has not been fully addressed.

But, environmental racism is not only experienced by those participating in the supply chain. In the US, climate change has been found to unjustifiably affect people of color; in 2020, researchers discovered that air pollution is disproportionally caused by consumption and production of material goods often by wealthy white people, yet it is Black people and Latinx people who bear more of the burden. According to the American Lung Association, possible reasons for the disparity include housing market dynamics, land cost, and class bias. It takes participants at all levels — from consumer to CEO — to actively acknowledge and address responsibility in creating an industry that is both more equitable and less deleterious.

“There is an unbreakable link between the environment and human rights when we're talking about sustainability,” says Ngozi Okaro, founder of Custom Collaborative. At its current pace, the fashion industry's carbon emissions are set to surge by more than 50% by 2030, which is now, somehow, only nine years away.

Considering fashion’s role in these issues and the widespread implications of COVID-19, how the industry navigates the next few years will majorly impact the future of the earth and the future of humanity. It’s time for radical change and every person must play a role.

Environmental Racism In The Fashion Industry

“Fashion exists in a system that comes at the expense of human rights,” says Céline Semaan, Executive Director of Slow Factory Foundation, a human and environmental rights nonprofit. Today, many new fabrics include plastic microfibers that shed toxins and debris, polluting oceans and eventually winding up in your body through food and water. This disproportionately impacts poor communities who live in countries with higher pollution levels and who have less access to clean water and food. The industry also exacerbates environmental inequality by contributing to 10% of humanity’s carbon emissions, and acting as the second-largest consumer of the world's water supply according to the World Economic Forum. The effects of this are often felt most in the countries where manufacturing is centered including China, Bangladesh, and India.

“Environmental racism means that the decisions society makes about our environment mirror the racism that's really endemic in everything else,” explains Okaro.

To spark change, disruption is necessary. Both from producers and purchasers. Consumers need access to information: how their clothes are made, who makes them (and the conditions they’re made in), where they end up, and how the process disproportionally affects humans across the globe.

In 2020, the Slow Factory Foundation, an NGO that offers free educational initiatives including courses and conferences, banded together with Swarovski and the UN Office of Partnerships, to create the very first science and design incubator, One X One, developing regenerative fabrics and technologies to tackle issues like waste and human rights. This allows designers to be at the forefront of change, while also including consumers from an educational perspective.

Through the program, scientist Charlotte McCurdy worked with fashion designer Phillip Lim on a carbon neutral dress that replaced typical plastic paillettes with sequins made from the scientist’s algae-based material, which were then applied to a 3.1 Phillip Lim dress. Public School New York partnered with scientist Theanne Schiros, turning leather she grew from bacteria in her lab into covetable sneakers. These experiments serve as proof that environmentally friendly production is possible. Turning materials, like algae, which reduces the amount of carbon dioxide in the atmosphere, and bacteria from pre-existing waste, into viable fashion materials via a lab, offer an out from the current cycle.

Today most supply chains follow a linear system, meaning a product’s life cycle follows a straight line in which a product is typically ideated, produced, sold, then discarded, ultimately ending up in a landfill. In addition to creating materials that biodegrade and actually reduce pollution, in recent years, there’s also been more advocacy and adoption of circular and regenerative approaches. This means that products are created via a closed loop system, where companies create accessible systems for recycling their materials and goods, rather than discarding them, so that they can be reused, and so on.

Brands like Adidas and H&M have joined an EU-funded sustainable fashion project aiming to develop a circular economy for clothing, resulting in old garments and fibers being recycled into new items for major fashion brands. As millennial and Gen-Z shoppers place more value on brands' ethos and ability to reduce their impact, large-scale players in the industry will be forced to adapt.

This is where organizations like Fashion Revolution, which creates educational programs, public campaigns, and advocates for policy changes and better industry regulation, have become an important resource and advocate in the fight against industry waste and the resulting social impacts.

In May, the Black Lives Matter movement gained global traction with massive marches and protests following the murder George Floyd, a Black man living in Minneapolis, by a policeman. Fashion companies, who have been consistently selling fashion activism (a term coined by Semaan in 2016) merchandise, were called upon to join the conversation.

Many efforts fell flat when brands that offered solidarity on social media found themselves scrutinized for racist business practices. Some fashion brands attempted to solve the problem by having white CEOs step down, announcing efforts to hire diversity and inclusion leaders. But, talking about diversity and inclusion is not enough. Anti-racism practices that create long-standing equity and accessibility in the fashion industry are needed on both small and large scales.

Prior to this cultural moment, Slow Factory saw the One X One program as an opportunity to develop an equitable employment framework that could be scaled across the industry. As part of the program, fashion designer Mara Hoffman teamed up with Custom Collaborative, an NGO that trains and supports women from low-income and immigrant communities in establishing living wage careers in sustainable fashion, to develop an apprenticeship pilot program and support BIPOC women who have faced barriers to employment in fashion.

The six-week apprenticeship was designed to ensure that individuals who have historically had limited access to specialized training in fashion and career advancement, were afforded extensive opportunities to participate. The summer 2020 class started with three women, but the goal is to continue to grow.

“We see this as a model for all of the companies and designers who say that they can't find skilled talent and we're showing that it's possible to train people to fill these diverse roles,” Okaro shares. “We took a chance and we did something during this horrible time and it was wildly successful. I think that that shows to the industry they can try this apprenticeship program and it could help save their businesses.”

Racism and sustainability in the fashion industry are often approached as separate issues. Brands launch purpose-driven initiatives, like social justice campaigns and donations to communities in need, but it does not solve the deeper structural issues. No doubt these gestures raise critical consciousness and life-saving money for marginalized communities, but as customers continue to pursue knowledge around how their clothing is made, it will be all the more obvious when such initiatives are more of a marketing campaign.

Time isn’t a luxury the fashion industry and the planet can afford. With climate change on track to be the biggest issue of this lifetime according to the United Nations, the industry — both consumers and producers — desperately need more anti-racist, decentralized systems in place of siloed solutions.