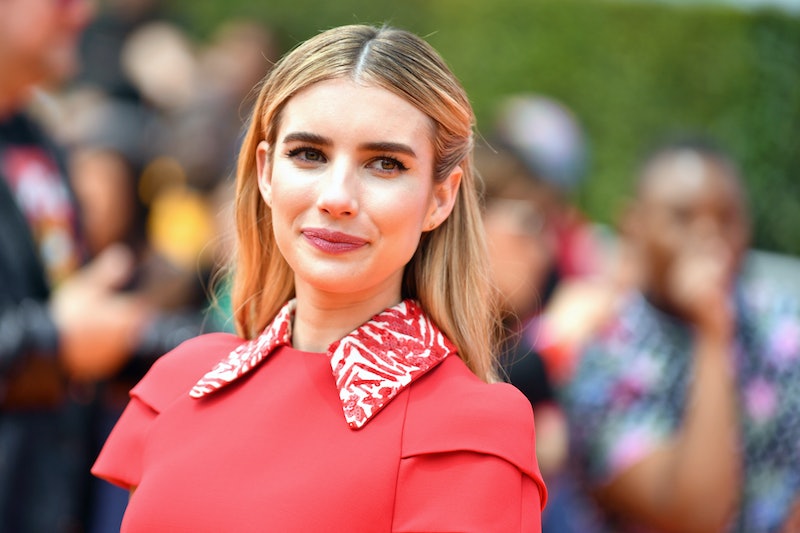 If you were to look inside this American Horror Story actor's wardrobe, you'd see a prototype of what fashion was like a half century ago. When she isn't dressed in head-to-toe '70s fringe and bellbottoms, she's typically channeling the previous decade with cat-eye sunglasses and Mary Janes. Emma Roberts' latest polka-dot dress, however, is a modern take on '50s pin-up girl.

This 28-year-old is somewhat of a connoisseur when it comes to vintage. She's partial to a pair of old-school Levi's and retro graphic tees, all of which she undoubtedly sources from the thrift stores that occupy every corner of her trendy Los Angeles neighborhood.

And when she isn't wearing something that was made 50 years ago, she often reaches for pieces that at least look the part. Take Roberts' new polka-dotted dress for example. On Tues., she was spotted in the prettiest smocked mini by WAYF while out to lunch with boyfriend Garrett Hedlund.

Made of lightweight linen, the old-school style is white with allover black polka dots and embroidered floral trim on the tiered skirt. Its sleek square neckline was briefly visible as Roberts let her black cardigan slide down her shoulders.

She carried a croc-effect handbag and accessorized with cat-eye sunnies (typical) and slingback flats from Aera.

Leave it to this retro-obsessed tastemaker to debut the most perfect summer dress with old-school flair. In the past, she's named '50s style icon Audrey Hepburn as her No. 1 muse. Hepburn, of course, was no stranger to a polka-dot print either.

Although inspired by a bygone decade, the smocked bodice on this ruffle-clad mini gives it a contemporary feel. It's right on par with your summer weekend aesthetic and, best of all, it's on sale.

Snag Emma Roberts' polka-dotted dress or another like it, ahead.

These retro red polka dots will give you the actor's look all the same. The mini features a tiered hem like Roberts', ruched sides, and balloon sleeves.

Opt for this scuba-crepe midi with a retro flippy hemline and a sweetheart neckline once favored by '50s pin-up girls.

Want to go really old-school? This dotted fit-and-flare will do. It has tied straps, a sweetheart neckline, and a self-tie belt at the waist for shape.