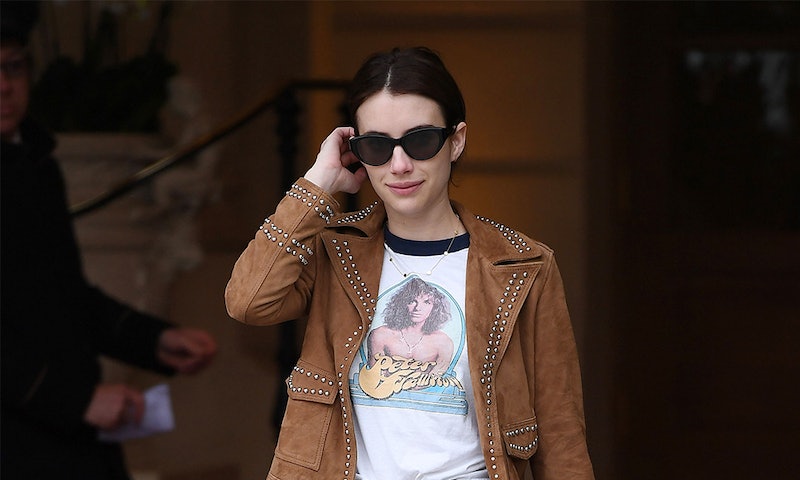 Everyone loves a bold print, but none more than Emma Roberts. The American Horror Story actor is so trend-forward, in fact, that the only way to take her looks to the next level is to wear two totally different patterns at once. Emma Roberts' animal and floral print outfit makes it perfectly acceptable to clash.

On Tues., the 28-year-old took a risk with her Louis Vuitton outfit at the designer's Fall/Winter 2019 runway show. On the last day of Paris Fashion Week, she flaunted a set of opposing prints for the paparazzi before taking her seat alongside fellow fashion girls Chloë Grace Moretz, Laura Harrier, and Willow Smith in the front row.

The boldest of them all, Roberts opted for black-and-white animal-print separates consisting of a dress over matching pants. The corresponding pieces feature varying leopard prints with patches of zebra in the mix. Then, the actor made the elaborate look even fancier by pairing it with a glossy floral trench coat.

She actually took the outfit straight out of the designer's Pre-Fall catalogue, where it was originally modeled by Presley heiress Riley Keough. Finally, to top off her clashing prints, she chose a pair of edgy, ruffle-clad heeled booties, also by Louis Vuitton.

Roberts must have gotten the message: zebra is the new leopard print. Kendall Jenner has recently shown her support with a pair of flamboyant zebra-striped pants, then Bella Hadid channelled her look with a full-length zebra coat.

The up-and-coming trend cropped up aplenty on the Fall 2019 runways, from collections by Maryam Nassir Zadeh to 3.1 Phillip Lim. However, pairing the bold pattern with a just-as-bold botanical print is so next-level.

You can't deny that Roberts wore the mixed prints effortlessly. The key to stealing her look is choosing the right color palette (black and white is a safe match for colorful florals, for instance). Try the trend-forward look with these combos handpicked by The Zoe Report, ahead.

This is the perfect piece to wear over, say, a pair of flowery pants for a Roberts-inspired clashing combo.

This actor sure does love a '70s-style floral, and these retro flared pants are right up her alley.

This floral top is great with its matching skirt, or paired with an animal print. Its thumbholes and shoulder keyhole give it edge.

This flowy midi skirt is a perfect piece for layering like Roberts.

This lightweight mesh turtleneck is the perfect animal print to take into spring. Make like Roberts and wear it under a floral dress.

Opt for a subtle silky slip dress like this to layer over a bold animal-print top.

Layering not your thing? You can do clashing prints all in one piece with this trend-forward dress.