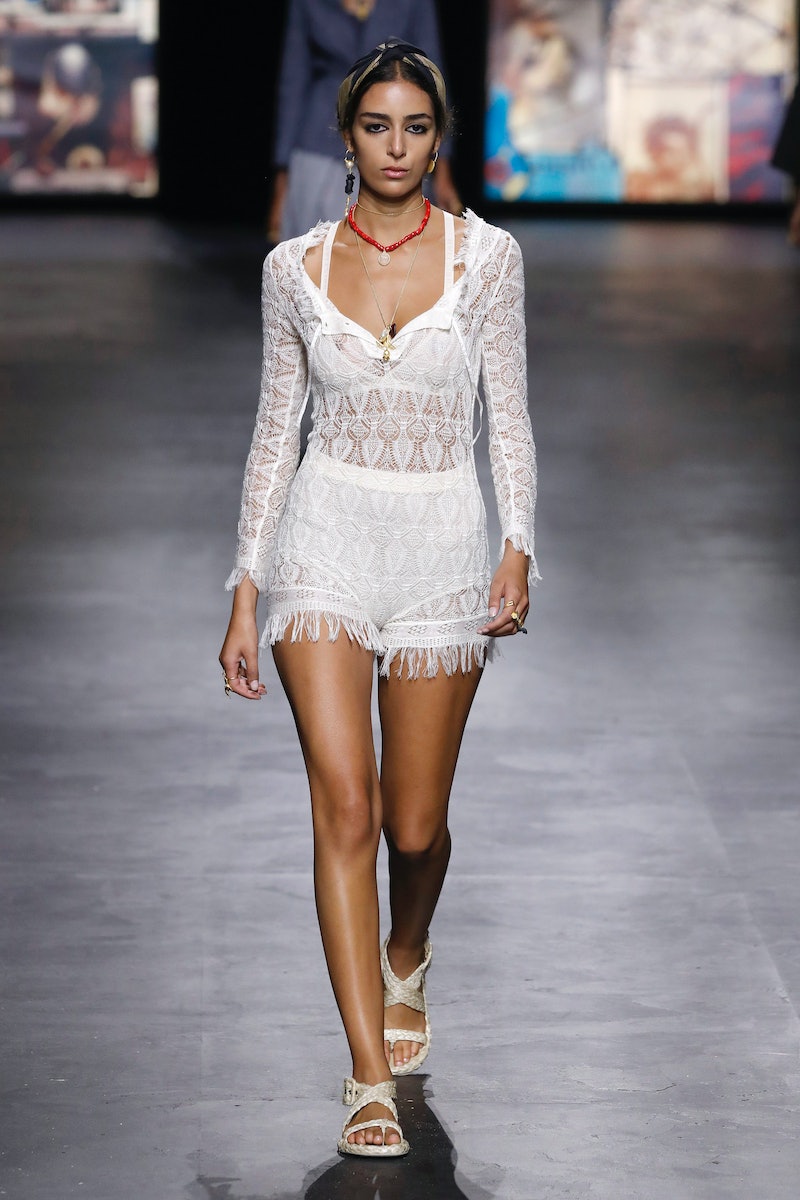 Cue the somber mood. After weeks, even months of warm sunny weather in Paris, the rainy season arrived just in time for Paris Fashion Week. While the calendar kicked off Monday Sept. 28, Tuesday's Dior show was the first major event of the season. Adapting to this strange and altered world was felt throughout the experience, the least of which was the collection that Maria Grazia Chiuri, Creative Director of Dior Women's, showed during the Dior Spring/Summer 2021 Runway Show.

A Chiuri- for-Dior show is always ripe with symbolism and messaging, furthering her feminist agenda, at least as viewed through clothes or, of course, the female artists she supports by decorating her shows. The venue, a box tent just in the Tuileries on the Place de la Concorde side. A few curious onlookers waited outside the show, and a trickle of street-style photographers milled about scouring for photo-op crumbs.

A giant neon hand, Hamsa-like loomed over the entrance where staffers distributed hand sanitizer, masks if needed, and took each guests' temperatures. The show was a multimedia affair as before the it started, guests present and at home were invited to enjoy a film by Alina Marazzi, another of the creative director's art muses. It was released on Dior.com, Dior's Instagram feed, as well as a new medium for the house, Tik Tok which live streamed the movie and show as well.

The pitch-black floor-to-ceiling room accentuated the 'stained-glass' windows lining the three sides. They were actually lightbox installations made from collages of magazine articles discussing great works of classic art from Giotto through Claude Monet by Italian artist Lucia Marcucci. This backdrop provided socially-distanced spots for the acapella/operatic singing troupe Sequenza 93, who performed "Sangu di rosa," a choral work by Lucia Ronchetti. The work was based on 19th century Sardinian Voceri that combines classical music with funeral services epithets. The resulting 'vocero' was a multi-layered combo of music and words of women expressing grief at losing their husbands or children.

If there was ever music fit for a post-pandemic fashion show, this was it. The eerie, aching soprano voices all speaking or singing over each other, could easily be compared to the thoughts of many. The performance created a cacophony of voices reminiscent of information overload — a phenomenon felt by all during the periods of confinement at home, glued to social media, while the Coronavirus raged. Show notes explain Chiuri's acknowledgment of "the period of crisis that is radically transforming behaviors, habits and rituals," noting that both our spirit and bodily attitudes have changed as a result. No argument here.

So has our way of working. The creative director referenced women working alone and often in a home studio or office such as poets, intellectuals, and writers. Women like Virginia Woolf and Susan Sontag were her season's muses. Georgia O'Keefe wasn't referenced, but was there in spirit as well. Women such as these toiled their pursuits in unfettered but stately garments of denim and chambray in silhouettes such as tunic dresses and crisp white shirts.

In a subdued palette of burgundy, green, rust, and golden mustard with pops of blue jean, cream, and white, Chiuri proposed a new idea of intellectually inclined workwear-slash-loungewear. The Bar jackets were carefree and referenced Mr. Dior's 1957 Japanese-inspired versions with tie-waists ready for physically or mentally challenging work. Tunic dresses in heathered fabrics over loose pants in linen with wrapped headpieces allowed for WFH on Zoom or hanging a canvas. The handicraft the designer so favors came through in paisleys, elaborate embroidery on skirts, jackets, and straps along with lace looks. Either aired with a leather vest a la Haight-Ashbury meets Leatherman or as a cheeky playsuit, they read Boho more than sweetheart.

Despite the low-key mood — ample room to roam the space pre-show to look for friends or sources without having to fight past a photo scrum taking the front row seat photos — the show was not without a surprise as fashion loves a little drama. As the last model finished the finale train, out popped an activist from the Extremist Rebellion bearing a flag that read "We are all fashion victims." Perhaps so. But maybe we can't resist coming back for more of the joy and excitement fashion delivers. Especially Chez Dior.