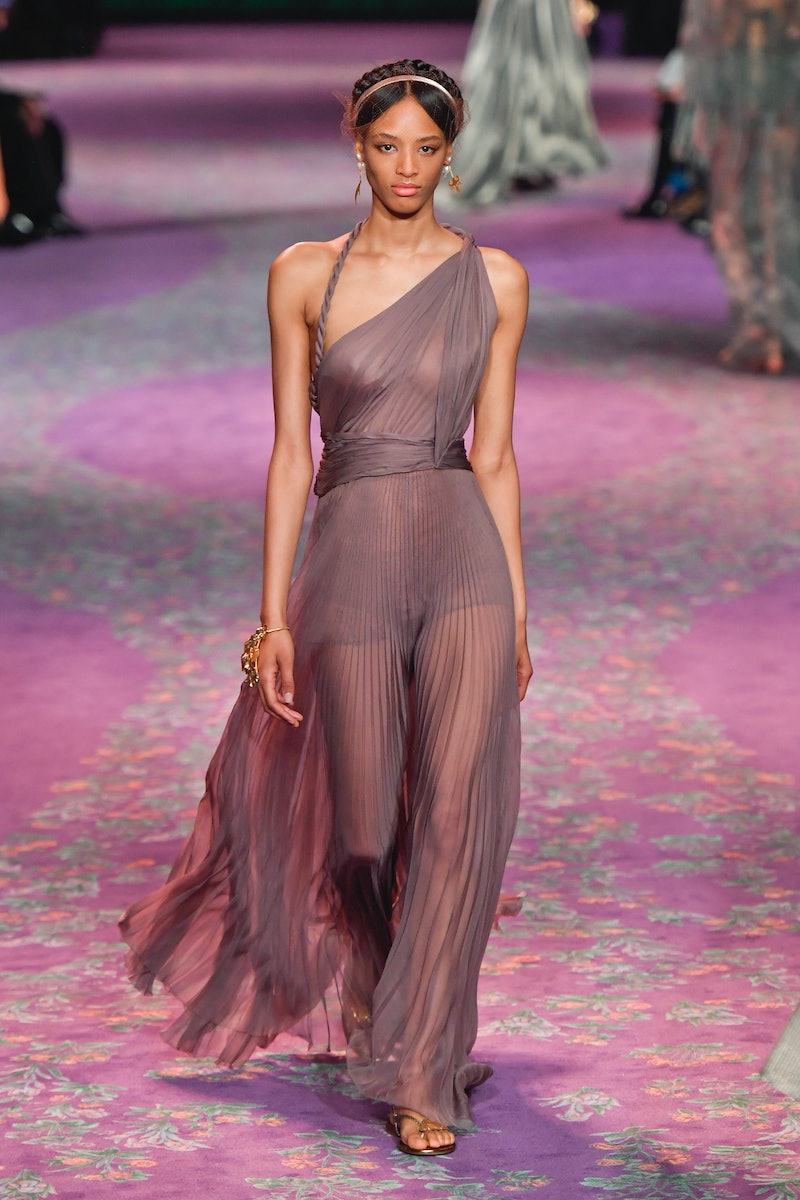 Each season, Creative Director Maria Grazia Chiuri reinvents the wheel at Dior, usually by looking to unusual, powerful women for inspiration. Last season it was nods to environmental activism and Catherine Dior, sister of Christian. In seasons before it was plaid and leather inspired by Britain's Teddy Girls, or slogan tees inspired by the '60s. Chiuri is vocal about her feminist views, and it’s no wonder, since she is one of the few female creative directors in the upper echelons of fashion. For Dior’s Spring/Summer 2020 Couture Show, the label offered up a beautiful tribute to two different female figures: the infamous artist Judy Chicago (most well-known for The Dinner Party), and the iconic Greek Goddess figure. Titled, “What If Women Ruled the World?” The collection, presented at the Rodin Museum in Paris on Jan. 20, was a stunning dedication to femininity and its power in every shape and form.

As guests stepped through the garden of the Rodin Museum, they were greeted with a white atmospheric space that was created especially for the show. Once inside, hand-embroidered banners hung from the ceiling made from female artisans from India posing intellectual questions that all led back to the main thesis ... “What If Women Ruled the World?” In both French and English, the banners asked the guests questions such as, “Would there be violence?” and “Would there be private property?” According to the show notes, “A committed question raised by the iconic American artist Judy Chicago became the driving inspiration for the creations in the Spring/Summer 2020 Haute Couture collection.”

Models walked the runway in ethereal interpretations of what a modern Greek Goddess might wear. At the center of it all was the peplos, a body-length garment established as typical attire for women in ancient Greece. Chiuri reworked the humble, draped silhouette into a bounty of modern, wearable options; from golden hued evening dresses with tiered skirts to bodices made of elegant braided cord. “As she developed her looks, the Creative Director drew inspiration from classical representations of Greek Goddesses such as Athena,” the show notes explain.

The runway began with a palette of nudes, taupes, and shimmering yet subtle metallics. Couture shows are an opportunity for designers to focus on craft ways, harnessing artisans' abilities to weave, pleat, bead, and embroider. In this collection, the sweeping floor-length gowns, many nipped at the waist with braided single shoulders, were standouts. Toward the end, the subtle color palette exploded into lush teals, royal purples, baby blues, and even chartreuse as a welcome, modern addition to the collection.

“For Maria Grazia Chiuri, each collection offers an opportunity to study a specific subject and contribute to the evolution of her singular approach,” the show notes continue. “In opening herself up to other ways of thinking, the Creative Director seeks to grasp the complexity of relationships between feminism and femininity.” On that note, even the soundtrack felt intrinsically feminine, as the show opened up with soft sounds of Bjork’s All is Full of Love.

In a nod to both ancient Greek inspiration and the intrinsic power of women, the models’ heads were topped with Grecian-style braided crowns and gold headpieces, created with Redken Global Creative Director Guido Palau. To complete each look, Dior’s Peter Philips lined the eyes in a double cat eyeliner look with a flick of gold in-between the usual black lines. “Maria Grazia knows what she wants, so she talked to me about eyeliner,” he said backstage. “The gold is just a pop, it needs light to be seen. It’s not about making a big statement.”