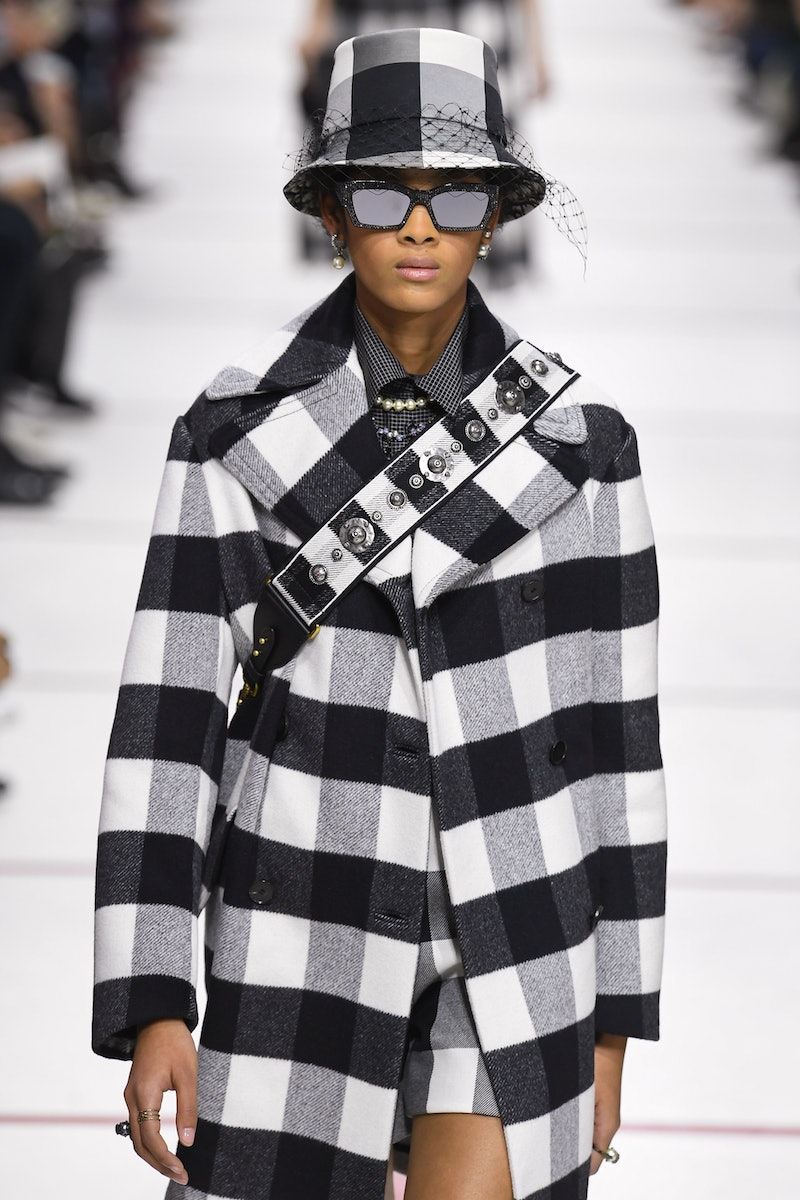 What is it about bucket hats that has the fashion world enamored at the moment? Perhaps it's the carefree California attitude that comes along with the It-accessory, or maybe it's the ease in which it can be paired with athleisure. Either way, though this cover up may skew on the sporty side, Dior's Fall/Winter 2019 gave the bucket hat a ladylike revamp. The brand debuted its latest collection on the first day of Paris Fashion Week on Feb. 26 and models all took their turns on the runway sporting designer Maria Grazia Chiuri's take on the latest accessory du jour. This time, the silhouette enjoyed a netted-veil update.

During January's Haute Couture show, Dior took its audience to the circus, but for Fall, Chiuri drew on fresh historical references, finding inspiration in Britain's Teddy Girls — sharp-suited, rock-and-roll loving women of the 1950s. During her tenure at Dior, Chiuri has focused on creating clothing that angles fashion through a feminist lens, at times overtly (like her now-iconic "We Should All Be Feminist" shirts), but at other times, in more subtle nods.

Though the bucket hat trend may not instantly queue up gender constructs in your own mind, the construction of each hat marks them decidedly different than the athleisure pieces that have appeared from other big-label brands. The contrasting tall, structured top (similar in many ways to a male-designated top hat) and delicate veil pulled low over each models eyes presents a subtle contrast — a push and pull of masculine and feminine. And the varying materials, rich leopard-print fabric, a soft plaid with the Dior logo popping out underneath, and a woven style in a black raffia all coordinated with the retro-punk clothing, offering elegance but with a punch.

To help pull off the look, the show's lead hairstylist, Guido Palau explains that a simple textured ponytail was key. "The show is about [the] bucket hat," he told a small group of editors backstage. "So, the ponytail is a way of containing it and giving it some ease at the back."

And as for the styling, the house of Dior notes via release that in drawing inspiration from the suit-wearing punkish Teddy Girls, the collection is "a conceptual and stylistic reinterpretation of the Fifties infused with the spirit of 'sportswear,' mixed with the House’s signature elegance." Therein is where the bucket hat shines on the runway, and will find success once it reaches the retail market.

Though the bucket hat Chiuri presents does in fact touch on the athleisure trend that continues to be a favorite of both brands and consumers, it does so in a decidedly Dior way: never giving up the elegance or traditional clean lines that have set the house apart for decades. Femininity and sport compliment and contrast all at once. Though the bucket hat in many iterations may serve as a piece that works best with sneakers and a sweatshirt, that isn't exactly the case with Dior's interpretation. Instead, it's the piece that would look just as elegant paired with a full-on ball gown as it would with a simple jeans and tee combination. If one thing is for sure, it's that this headwear is destined to be the accessory du jour of the selfie-snapping style set.