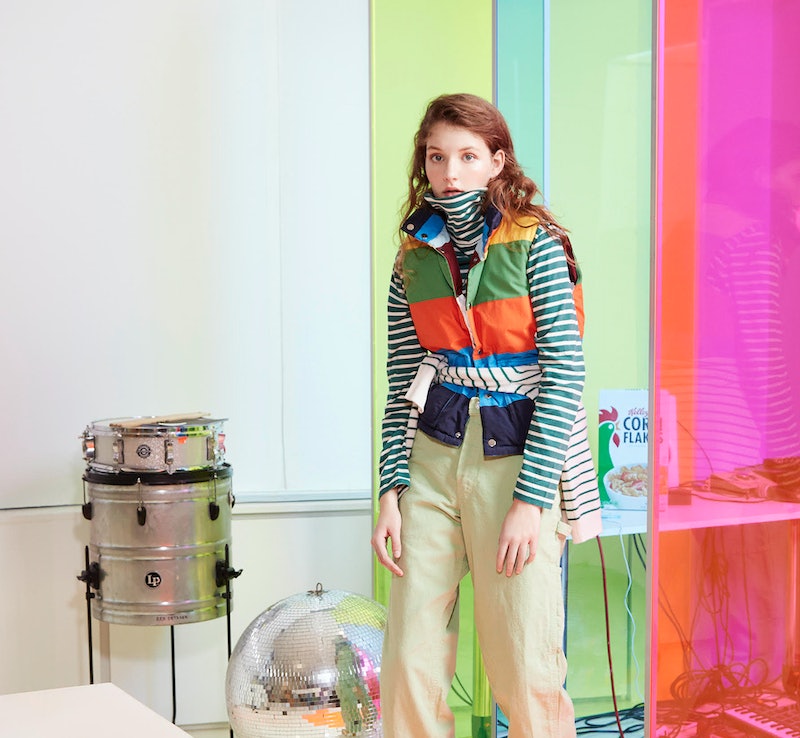 You know preppy style when you see it. It’s polo shirts, cardigans, bright colors, stripes, and often a telltale logo. On one hand the look is playful, colorful, and sporty. On the other, old-school prep can feel more than a bit stuffy. But in 2019, a number of new brands are redefining classic, preppy style and overturning it's country club persuasion. This new vision of prep diverts far away from any hard and fast rules of tennis court style and country club dress codes.

“The way that the fashion industry has co-opted traditional preppy style is all about subversion,” say Sara Idacavage, fashion historian and instructor at Parsons School of Design and the Pratt Institute. Of course, this is a huge part of prep’s legacy. For example, as iconic as Ralph Lauren is as a purveyor of American preppy style, hip hop culture’s love of Polo Ralph Lauren in the ‘80s and ‘90s is just as historic.

According to the fashion historian, the reason prep is often revisited in fashion is precisely because of the many ways it can be interpreted. “The basic factors that determine the relevance and longevity of a trend are connected to the innate human desires to be comfortable and to express ourselves through customization,” Idacavage says. “Prep style fulfills both of these purposes.”

While leaders in preppy style are still very relevant today — including Tommy Hillfiger, Perry Ellis, and J.Crew — there are also a number of newer labels currently rewriting tradition, not just in America, but on a global stage. Learn about five brands that will help you pull off the cool, new preppy look in 2019.

A clean, striped tee is not only one of the most timeless, enduring fashion pieces one can own, it’s also a mainstay of preppy style. It’s for this reason Kule continues to be a favorite modern-day preppy leader. While designer Nikki Kule doesn't personally use that term to describe her brand — “we are careful to eschew traditional preppy visuals. No boats, no Ivy quads,” she says — she credits the aesthetic’s recent popularity on customers desire to fight against fashion’s constantly changing trends.

“There's a general trend away from fast fads and in investing in quality, long-lasting pieces,” Kule says, referencing other famous striped-shirt fans. “When you look at pictures of the Kennedys or Brigitte Bardot or even Picasso, you want to buy their clothes. The looks are so timeless and effortless.” This said, one look at Kule’s collection and it’s clear its approach is not just about sticking with classic clothing but weaving creativity into styling them: stripes in horizontal and vertical lines contrast each other, athleisure blends seamlessly with pumps, and prim coats layer gracefully over gym shorts.

Another non-American designer, Wales Bonner’s designs are a study on identity and include both European and Afro-Atlantic references. For the LVMH Prize recipient’s Fall/Winter 2019 line, she specifically found inspiration in yearbooks from one of U.S.'s historically black colleges, Howard University. On the runway this translated to varsity jackets, tweeds, and relaxed tailoring. Instead of sports teams, the names of poets Ben Okri and Ishmael Reed were visible on shirts. From Bonner's unique point of view, she honored tradition while adding something new. “I was trying to create a hybrid between very recognizable American college clothing and transform them with a sense of meaning and magic,” she told WWD at the time of her show.

Rowing Blazers founder Jack Carlson is quick to point out that preppy is not the word he describes his bright, colorful, and wildly popular approach to polos, rugby shirts, and suiting. “It’s not just ‘classic American style,’ but there’s an element of youthfulness, of fun, of color, or irreverence, even rebelliousness that goes with it,” he says. “I think ‘collegiate’ is a great word for this spirit, because what is collegiate if not the intersection of traditional and youthful?”

For the New York-based brand, its collection may be filled with silhouettes classic to the preppy aesthetic, but as Carlson says, there are no rules attached for how or who should be wearing it. Part of the brand’s identity is a welcome invitation for customers to define prep for themselves. “We don’t market the product by showing a bunch of white people on a boat. We also don’t force diversity or inclusivity in a corny way,” says Carlson of Rowing Blazer’s ethos. “As a brand, we are partners with many of the top rowing and rugby clubs in the world. And in 2019, when everyone’s an expert, everyone has the Internet, everyone can tell right away what’s real, preppy is no longer the province only of people who live, think, look, or even dress a certain way."

Emily Bode’s version of prep is a nod to art, as well as a love letter to the past. As the young menswear line contains many classic prep and retro collegiate references, and often incorporates vintage fabrics, the designer’s signature touch makes every piece feel far from the usual fare. For her Spring/Summer 2020 collection, crisp shirting, logo-covered jackets, and colorful, chevron stripes, were all inspired by the circus.