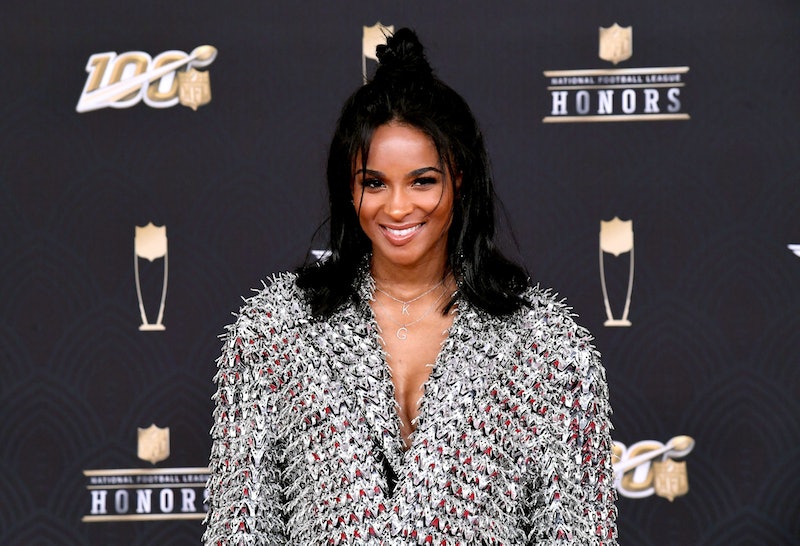 While many celebrities have been making extravagant changes to their hair in the last few months, there's one star who takes the cake when it comes to making her looks dramatically different — that would be Ciara, whose long list of new styles just keeps growing this season. The debut of Ciara's new Afro and braids is another case in point, showing how the star really is making the most of fresh hairstyles during the summer (and redefining the classic idea of maternity fashion while she's at it).

Gracing her feed with three magnificent styles so far this week, Ciara started out with sharing a picture featuring an ultra voluminous Afro on July 21. The wig was courtesy of celebrity hairstylist César DeLeön Ramirêz and it was impeccably styled by celeb hairstylist Kiyah Wright.

To complement her hair, her makeup, done by Yolonda Frederick, was comprised of a brown smoky eye, bold brows, and a nude lip. Fashion-wise, the singer glittered in gold accessories and paired her hair and makeup with an edgy leather bandeau two-piece set. She captioned the photo with "#Rooted" causing some speculation from commenters about her hinting at a possible new album drop or single release.

On July 22, she shared a second post emanating a wholly different vibe from the previous, but including the same hashtag in her caption, "Can’t pull the hood out me...I’m #Rooted."

Both Wright and Frederick teamed up again for this look that featured hip-length braids adorned with gold cuffs. She wore a cross-body chain over a neon orange crop top set that framed her belly, and a pair of small '90s-inspired sunglasses. Her makeup remained similar to the post prior, with an airbrushed complexion, enviable brows, and brown smoky eye, but her lips had a pinkish tint.

Her third and most recent style was shared on July 23, showing Ciara with a fresh face, voluminous curls that reached past her shoulders, and another matching set. All three of these flawless looks come after Ciara's ultra-long bleach blonde strands in the beginning of the summer, and her lengthy bronde waves she rocked through mid-summer — making it fair to say she's the ultimate inspiration when it comes to refreshing your usual 'do.