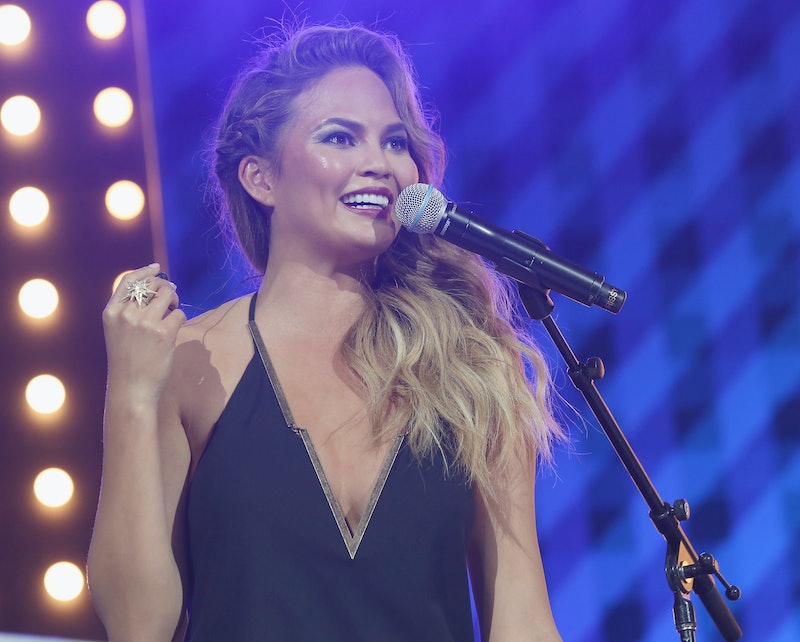 Self-taught chef, longtime swimsuit model, and national treasure of the Twitterverse, Chrissy Teigen, has had a busy year. Between giving the people premium content (read: adorable snaps of little Luna and baby Miles), launching her own cookware line, and teaming up with entertainment greats such as Keenan Thompson for stand-up comedy reality show, Bring The Funny, it's safe to say the mother-of-two has been booked and busy. That hasn't stopped her from serving ample street style looks, though, and Chrissy Teigen's PVC heels are the mogul's latest go-to staple worth taking note of.

Celebrity closets — in all their sprawling splendor — generally expand to about the size of a New York City studio apartment. The thought of someone of Teigen's stature opting for the same pair of heels several times in one week might seem foreign, but the model has done just that, cementing her distinct relatability once more. Styling a pair of Alevì pointed toe stilettos with four (yes, four) separate looks over the span of a few days, Teigen is maintaining her laid-back sensibility, and opting for sustainable fashion practices while she's at it.

The sold-out heels featuring beige lining, a gold chain ankle strap, and a PVC pointed toe — are about as versatile as it gets. Thanks to a touch of hardware, they serve as an edgy departure from a classic black or nude pump, offsetting Teigen's feminine frocks wonderfully. From a ruffly lavender number to a teal feather-trimmed dress featuring a thigh-high slit, Teigen demonstrated a range of ways to style the translucent footwear. As proven by Teigen's stellar style lineup, you'll get a ton of use out of whichever PVC style you choose. Ahead, The Zoe Report selected clear heels to consider for summer, from bright and chunky to simple and sleek.

Opt for Yeezy if your motto is "Glass slipper, but make it streetwear."

Chic and timeless, these medium-height mules will pair wonderfully with wide-leg jeans.

The smooth, structural silhouette on these grey sandals are bound to turn heads.

Mix things up and go the whimsical route with this nostalgic style from Maryam Nassir Zadeh.

Keep it classic with these moveable, subtle kitten heels.

These suede and PVC sandals will mesh just right with a ruffly bohemian frock.

Half cutesy, half cool — these slingback pumps are the best of both worlds.