By Melissa Epifano
7.21.2020
Courtesy of Chillhouse 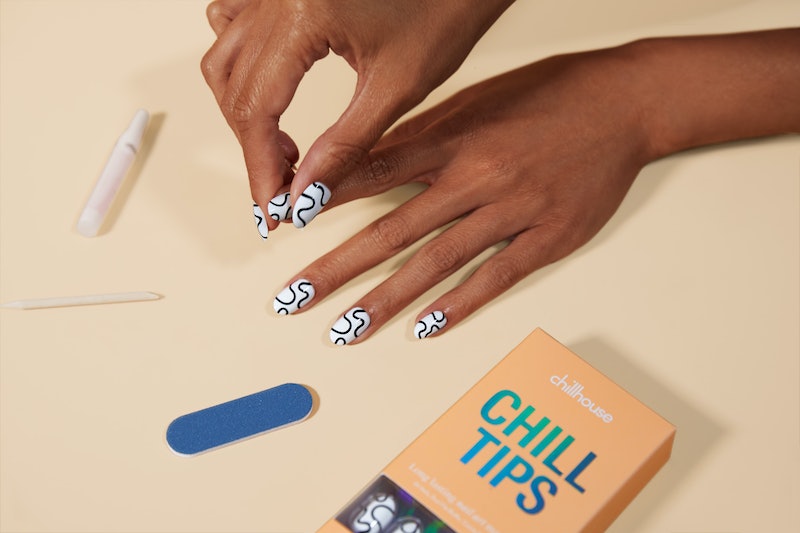 Chillhouse could most certainly boast that it's the only place in NYC where you can sip on a lavender latte, get a wildly artistic mani, relax in an infrared sauna, and decompress with a massage all in one Instagrammable building. But there's one thing it does truly does best: nails. You just know when you see a Chillhouse mani: they're modern, poppy, and unlike your classic salon looks. And now, the city's coolest self-care space has officially made it possible to get its iconic designs without a trip outside thanks to the launch of Chillhouse's new Chill Tips.

With three undeniably chic designs to choose from, you'll be able to purchase these press-ons starting July 21 for $16 per design, or the whole set for $45. Each kit includes 24 nails, non-toxic nail glue, a file-buffer duo, and a cuticle stick. While many brands have hopped on the rising trend of press-ons among customers and celebrities, Chillhouse's version is especially unique thanks to their creative designs.

The three designs that were chosen are Chillhouse's most popular and appeal to a range of mani preferences. If you like keeping things muted and minimalist, Editor-in-Chill is a perfect match with its curvy peach and white color combo. For fans of graphic prints, Wavy Baby suits your needs with its Matisse-inspired black and white line design. And if you prefer a splash of color and an extra bold statement, you can't go wrong with Dot Matrix's green base with white dots. Each is wildly different than the next, but like Chillhouse itself, they're all equally Instagram-ready — not that you'd expect anything less.

"We owe a lot of our success to our nail designs! They're a huge draw for our stores — always have been!" says Cyndi Ramirez-Fulton, founder and CEO of Chillhouse, in an email to The Zoe Report. "When it comes to products, it took us a long time to decide on something that felt extremely necessary for both our existing customers and new ones alike."

In fact, surprisingly enough, it took a wave of people turning to more at-home manicure options for the brand to land on this particular product. "It wasn't until we realized this resurgence of press-ons that we started to think of them as a viable option, especially when it came to getting our iconic nail art out there in the world for anyone to access."

The ability to finally get Chillhouse designs at home is reason enough to try out these press-on nails, but their ability to be reworn helps seal the deal. Because the nails aren't pre-coated with adhesive, you can re-apply them, which saves on time and money and makes it ideal for those who still feel most comfortable doing their manis at home. "Many folks are still feeling a little uneasy when it comes to receiving beauty services indoors and we felt this product could help those who want their nails to look good without having to reenter the salon experience right away. We're all about giving people options — this is us doing just that," says Ramirez-Fulton.

And while there are only three options to begin with, Ramirez-Fulton does hint that more are in the works. "We had to go with the classics but we have plans for many other designs in the future — perhaps even new ones you won't find on our lookbook. Stay tuned!"

Get your hands on the new nail kits by shopping all three styles, below.