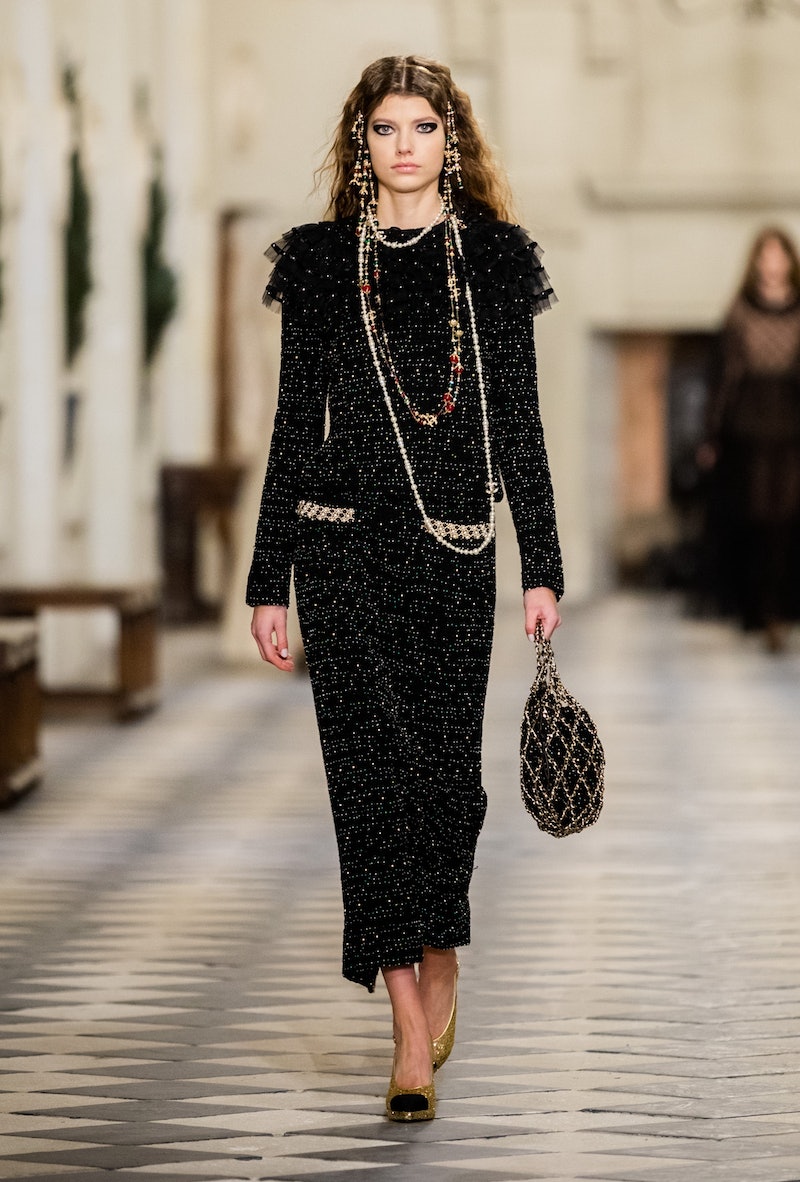 The last nine months haven't offered many opportunities for dressing up. But, there's been plenty of time to slow down and escape — dive into new novels, binge-watch period dramas, and simply daydream. Chanel's 2021 Métiers d'Art collection is another escape — one that fuses modern realities (leggings included) onto a romantic and glamorous past. On Dec. 3, Creative Director Virginie Viard's second Metier d'Arts collection, was luxe, glamourous, and dreamy — inspired by Catherine de' Medici, the Queen Consort Of France until her death in 1589.

The ‘Le Château des Dames’, Château de Chenonceau, in France's Loire Valley made for a dramatic backdrop for the show, but it was also a source of inspiration for the collection itself. The windows, towers, and turrets appeared as a belt wrapping the torso of a black high-low gown that served as the finale look. Viard also looked to the castle's checkered floors and ornate brocade as inspiration for the collection's prints. "Showing at the Château de Chenonceau, at the 'Château des Dames', was an obvious choice," Viard explained via press release. "It was designed and lived in by women, including Diane de Poitiers and Catherine de’ Medici. It is a castle on a human scale. And Catherine de’ Medici’s emblem was a monogram composed of two intertwined Cs, just like that of Chanel.” With brand muse Kristen Stewart serving as the solo guest of the show, models made their way through the grand halls, recreating the same elegant strolls done by their counterparts centuries before.

Continuing Viard's refined and referential vision of Chanel, the collection looks to Coco's own muses, noting that in 1936 the founder spoke of her admiration for women born during the 14th and 15th centuries. “I have always been struck by a strange feeling of sympathy and admiration towards the women who lived from François Ier to Louis XIII, perhaps because I find them all to be great, with a magnificent simplicity and a majesty imbued with onerous duties.” The clothes are those made for such women — elegant and delicate but also unfussy. Ruffled sleeves are too short to encumber, long dresses are left undone at the bottom, allowing for movement. Even the footwear — the sparkly cap-toe Mary Janes, tall black boots, and two-tone sandals — are tenets of the Chanel identity, brought back in a modern context.

Like Chanel's Spring/Summer 2021 show — a nod to Hollywood, both on the red carpet and off of it — the Metier d'Arts collection never takes the glamour over the top, instead contrasting the luxe fabrics and floaty silhouettes with '80s-era details like layered pearl jewelry and bright leggings. But, as Metiers d'Arts is Chanel's annual runway collection showcasing the work of the French fashion houses' artisans, even the most pared back pieces of this collection are beaded, feathered, and embroidered by hand. That simple knowledge is enough to remind you that while a knit sweater and skirt pairing or a sleek black jumpsuit are part of your own wardrobe these days, these clothes still exist in a dream world for most. But, right now, it's a welcome escape each woman can embrace as she dresses to rule her own domain in this unprecedented era.