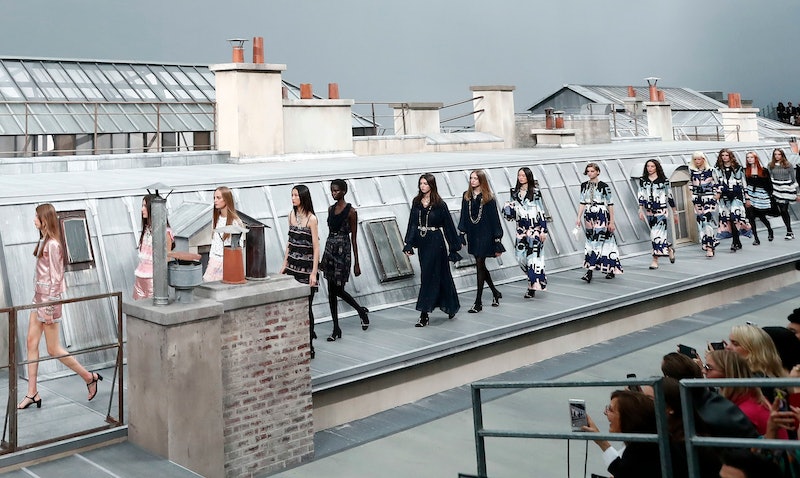 Every season, Chanel closes out the Paris Fashion Week calendar — and fashion month on the whole — not just with a show, but with a show. Last season, the late Karl Lagerfeld took us to the Swiss Alps, where the Fall/Winter 2019 dream-like set was complete with almost a dozen snow-covered chalets. And for Spring/Summer 2019, we headed to the beach, where lifeguards looked on as the models sank their toes in the sand as they sauntered through the Grand Palais. But for Chanel's Spring/Summer 2020 runway show, Creative Director Virginie Viard, who officially took the helm after Lagerfeld's death in Feb. 2019, proved she's not trying to fill her predecessor's shoes — at least not in the showmanship sense.

Instead, Viard meticulously stripped back the histrionics that we've come to adore from any Lagerfeld production; she reset the stage by translating the history of the brand into a series of fun, wearable pieces that felt core to its legacy. As such, there were classic Chanel mainstays like cap-toe block kitten heels, ultra-feminine silhouettes, and a whole lot of tweed. (This time, it came in both jacket and sleeveless romper form.) The inspiration behind the collection? The city where it all began, of course: The set for the Oct. 1 show was smaller-than-usual production of the Parisian skyline at the Grand Palais.

"The Spring/Summer 2020 show decor pays tribute to Paris, or more precisely a particular view chosen by Virginie Viard: that of the rooftops so typical of the capital with their zinc surfaces, walkways, chimney pots, and skylights," the brand said in an Instagram caption just after the show. "The roofs of Paris remind me of the atmosphere of the Nouvelle Vague I saw silhouettes walking on the roofs,” Viard continued in the show notes.

But Viard, who's been with Chanel for more than three decades, didn't just reiterate the brand's heritage: She also took creative liberty with the logo, reimagining it as pink, blue, white, and black colorblock on a series of maxi dresses and cardigans — a pattern that could easily attract a younger crowd.

The lion's share of voluminous mini skirts (one worn by Kaia Gerber) and shorts in various hem lengths grounded the more nighttime-leaning looks, which were inarguably strong. And two iterations of pedal pushers, first in a black-and-white windowpane and later in a true-blue denim that hit at the knee, felt both fresh and easy to wear.

It's also worth noting that Gigi Hadid escorted off a rouge show-goer who stormed the stage in pants-less look that made a strong case for nylons.

While this is technically Viard's third show in charge — she was responsible for both Resort 2020 and Couture Fall/Winter 2019 — this is her first spring collection. Though the fanfare was missing, Virginie has proven to be a deserving successor. See more of the standout looks below.