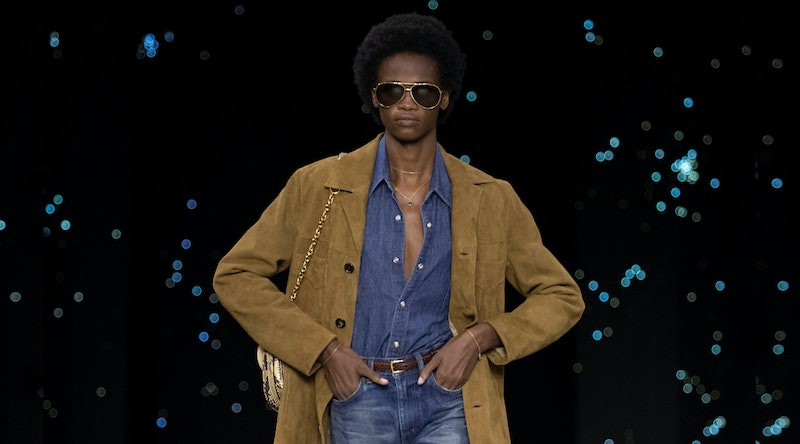 One glance at Hedi Slimane's latest collection for Celine and you'll know for certain the '70s were on his mind. Bootcut jeans, prairie dresses, and cool, casual outerwear were the central pillars on his runway in Paris. The designer has now clocked in his third season with the French label and has finessed the brand from its look under previous creative director Phoebe Philo to his own, sometimes surprising vision. It was no easy task to win the hearts of Philophiles, but Celine's Spring/Summer 2020 collection is confident in its direction. It nods to what the modern woman wants to wear right now while mirroring a wardrobe from decades past.

Embracing a brand's tradition and history is an art Slimane has perfected over his stints at Dior Homme, YSL, and Celine alike. This season, each look that came down the runway spoke to different iterations of 1970s ease and attitude; there was the frillier, prairie-folk side that subtly nods to a more relaxed feel — a departure from the usually rock 'n' roll proclivities of Slimane's past. Laidback riffs on retro dressing included flared pants, fur-trim suede coats, and plenty of denim-on-denim. The overarching palette was subdued and entirely wearable, styled as if each model had stepped off of Paris' metro and straight onto the runway.

One of the initial takeaways from Slimane's Spring/Summer 2020 collection is that the brand is banking on denim. There was a lot of it. While this relaxed the vibe, it still felt polished and inarguably cool, even when presenting cuts and washes (like whiskered denim) that may not have had much traction the past few years. There were a couple standout head-to-toe blue jean looks, as well as bootcut styles topped off with frilly silk blouses and cropped peasant vests. There were also plenty of effortlessly styled looks consisting of a blazer, silk shirt, and crewneck jumper — a combo that will likely be the cool girl's uniform in the months to come. Other notable pairings included high-volume outerwear (think long trenches and big, furry Almost Famous coats) pared down with a romantic top and denim. It sounds simple enough, but Slimane made it feel fresh.

On the footwear front, some of the models were dressed in white sneakers, another nod to the practicality and wearability of the looks throughout. There were also a slew of covetable slouchy boots in simple shades of black and camel that hit that sweet spot — on the runway they're worn just as successfully with jeans as they are with the more dressed-up looks.

The jewelry included pendant or chain necklaces and other wearable gold pieces like cuffs and delicate bracelets. Belts cinched at the waist were another common thread throughout the collection. Both leather and metal iterations were layered with both the denim and silk ensembles, serving as a focal point.

Though Slimane wasn't the only designer in Paris to draw inspiration from the '70s, his reinterpretation is one that successfully finds a way to make the past feel modern, and luxury feel accessible. It's easy to imagine recreating the runway looks at home, and to envision exactly how each piece would squarely fit into your current closet. Thanks to Celine, you'll be ready to embrace the decade that gave you bell bottoms, peasant blouses, and a more laidback approach to getting dressed this spring.