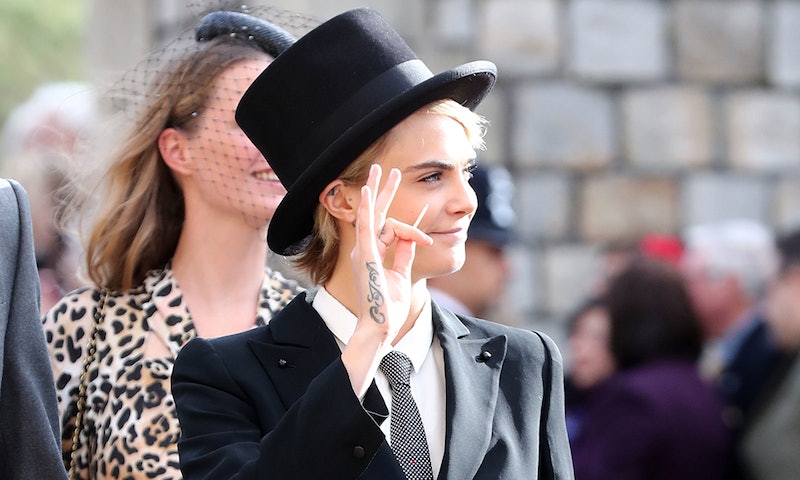 Cara Delevingne is a rule bender by nature, so it's only natural that the model played with the dress code at Princess Eugenie's wedding on Oct. 12. Although the likes of Kate Middleton and Meghan Markle opted for dresses and fascinators, the 26-year-old arrived to Windsor Castle on Fri. morning in a pair of bold trousers and a black top hat. Cara Delevingne's suit and hat were one of the highlights of the day.

Princess Eugenie married longtime boyfriend Jack Brooksbank at St. George's Chapel at Windsor Castle on Fri. Leading up to the ceremony, Eugenie's notably strict dress code — calling for women in traditional day dresses or skirt suits, and men in morning coats with tails — had everyone talking. Technically, Delevingne, who arrived alongside her sisters Poppy and Chloe, brother-in-law James Cook, and US journalist Derek Blasberg, did abide by the dressing requirements, only not necessarily the ones set for women.

The model rebelled against the traditional dress and fascinator look and sported a tuxedo instead. The outfit consisted of cropped, tailored trousers and a short morning coat exposing a cummerbund around her waist. The jacket featured a knee-length tail — heeding the requirements — and she wore a black-and-white printed tie underneath. Delevingne wore black stiletto heels with the outfit but the accessory that really stole the show was her fabulous 1920s-style top hat.

As with any royal wedding, the morning was full of fashion statements by both British and Hollywood royalty. Fellow supermodels Kate Moss and Naomi Campbell were in attendance, too. Moss wore a black-and-white polka dot skirt suit with royal-blue heels and a black fascinator veil, while Campbell dressed to the nines in a metallic ombré Ralph & Russo Couture number with a cape to cover her shoulders. Campbell paired the feathery ensemble with a large, black-floral fascinator and leather gloves.

Meanwhile, Kate Middleton turned up to her cousin-in-law's wedding in a bold fuchsia dress by one of her favorite designers — and the name behind her own bridal gown — Alexander McQueen.

More than 800 people attended the celebrity-studded royal ceremony, including Demi Moore, Liv Tyler, Ellie Goulding, and James Blunt. Delevingne's bold look should have come as a surprise to no one, considering the model's known love of menswear and rule-breaking fashion.

The trendsetter has always been a fan of gender-bending styles. Upon first breaking into fame in 2015, roughly around the time Paper Towns was released, Delevingne became the face of DKNY's menswear campaign and has sported suit after suit ever since.

Just days before the wedding, the Suicide Squad actor wore another suit to the launch party of Burberry's "Her" fragrance, for which she's an ambassador. Delevingne ditched the classic, collared undershirt and wore the waistcoat solo with trousers and a jacket, all Burberry, of course.

The celebrity set's obsession with suiting shows zero sign of stopping. With Blake Lively's closet, Vanessa Hudgens' collaboration with Suistudio, and even Naomi Watts' recent homage to the '70s, Delevingne is in excellent company.