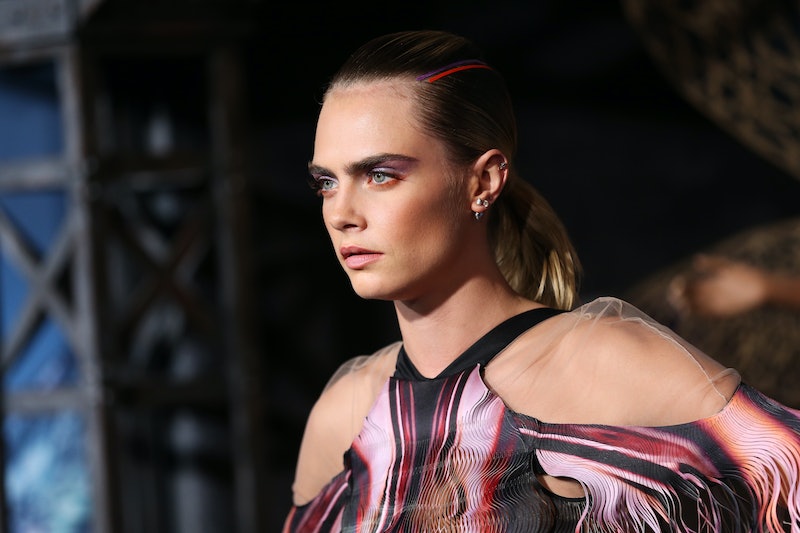 Anyone who crossed paths with this model on Tues. night might have been inclined to follow her around New York City seeing as the LBD she had on looked like it was, itself, throwing a party. Cara Delevingne proved again that a black mini dress is the perfect after-dark outfit for any event, regardless of the season.

To name someone with a more diverse style than this Dior girl would be a near-impossible feat. One day she's wearing a boyish suit and the next, a sparkly gown worthy of a Disney movie. The common denominator of her ever-changing aesthetic, however, is most definitely her affinity for an LBD.

Like Delevingne, herself, the classic black mini dress is wildly adaptable. LBDs can be romantic and poised like Audrey Hepburn wore them in the '60s or spicy to a J. Lo degree. The model's latest rendition aired more toward the latter.

The David Koma dress Delevingne changed into after her Tonight Show taping was defined by a sheer-paneled bodice adorned with sparkly corset detailing. She wore it during a photoshoot for The Wing — a super-trendy women-only community workspace — then kept it on for a Q&A she and Orlando Bloom hosted after a BAFTA screening (it was, indeed, a busy day).

The model has been living in David Koma's edgy designs lately, including that cutout jumpsuit she wore to WSJ.'s 2018 Innovator Awards and the "naked dress" she more recently debuted during the promo tour for Amazon's Carnival Row, a new series in which she stars.

Her latest Koma LBD featured dainty spaghetti straps, a V-cut neckline, and a cutout torso with sheer panels and dazzling diamanté detailing. She paired it with equally sparkly pumps, a high ponytail, and a striking magenta pout — a casual Tues. night outfit, one might have called it.

Perhaps it's time to add a black mini like this to your party dress rotation. The Zoe Report's picks, ahead.

Copy the model's LBD look for your next night out with this strappy cutout mini.

Sheer side insets and a mesh hem give the classic little black dress an edgy upgrade.

Delevingne's cutout LBD gets a casual redo thanks to this denim mini with contrast stitching.