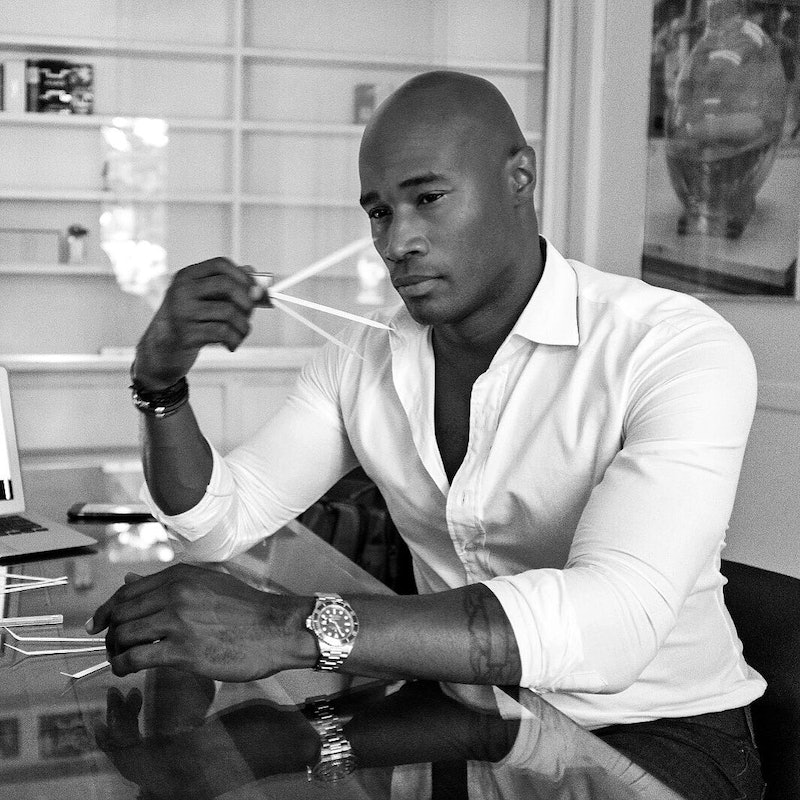 Now more than ever, there's increased visibility for hundreds of incredible Black-owned beauty brands. Whether it's skincare, makeup, hair, and even candles, there's no denying that brands made for us, by us, are ever-prevalent. However, a search for Black-owned perfume brands will render much less fruitful results — and if you're seeking out one in the luxury space, it's almost impossible. But why? According to the few Black perfumers and fragrance brand owners who have been able to successfully make a name for themselves, it all boils down to access.

"My love for fragrance goes back to when I was a kid," Chris Collins, founder of his eponymous luxury perfume line, tells TZR. "My dad used to wear cologne, or at least that's what we used to think it was called. He would wear scents like English Leather, Stetson and Grey Flannel and I would always be interested in what he was wearing." That infatuation only grew larger, following Collins into college, and through his two-decades long career as a Ralph Lauren brand ambassador. "When I was in high school and college it was always more important for me to smell good than to dress well," he says. "I didn’t grow up with a lot of money so buying a fragrance that would last a long time would bring me into this feeling of luxury." However, it wasn't until the tail-end of his career with Ralph Lauren following a meeting with a luxury perfumer that the inception of his own brand began. "He basically brought me in and mentored me on perfume creation," he says. "At one point, all I knew was fragrance either smelled good or it didn’t, but then I started to learn the language of fragrance like top notes, heart notes, base notes, florals, orientals, and became so much more intrigued. It brought me back to my science days because when I was in college I studied biology and chemistry so perfume made so much sense to me."

Fast forward 15 years and Collins' luxury line is the only Black-owned fragrance brand housed in Bergdorf Goodman. And while the 100% self-funded line is nothing short of incredible, he's well aware that it's not common. The opportunity to live in Paris to study fragrance isn't an experience that many people of color are presented with. "I lived there for awhile to learn the history of perfume and to learn more about the originals like Guerlain, Chanel, and those original French fragrance houses," he says. "It’s unknown to most people of color because fragrance as we know it is French in origin, and the education is expensive."

And Chavalia Dunlap, perfumer and founder of Pink MahogHany Fragrances agrees that access to education is one of the main reasons that Black representation in fragrance remains so low. "When I was in school, I had no idea that being a perfumer was even possible," she says. "My assumptions, due to lack of knowledge, led me to believe all 'acknowledged' perfumers had to have been born into a royal family lineage of perfumers and all others, especially those of color, were innately excluded." She cites the limited options for education as one of the biggest problems. "There's a lack of perfumery schools that have similar curricula as those in other countries like France and Sweden, and obtaining a master perfumer’s certificate is a tad bit difficult. Especially financially." And while Dunlap has a career that spans back to 2005, even she still feels like she's fighting for recognition in the fragrance community. "Even though one may look at my tenure in the industry and assume I’m a veteran of some sorts, I feel I’m still 'breaking into' aspects of the fragrance industry due to the many unspoken barriers and prejudices that can often occur with this field as being self-taught," she says.

So what's the solution? As we're seeing across industries, those in high places must be willing cease the exclusion of Black brand owners. "I think Caucasian perfumers — especially in this climate, have a charge to truly acknowledge that there are disparities in the field of perfumery and not discredit us because we didn’t attend a traditional perfumery school," she says. "Being self-taught takes true discipline — as there’s no set curriculum, and it takes dedication. The same platforms that are given to non melanin-filled perfumers should be equally offered and made available to us without restriction, hesitation, or prejudice."

And it seems that those cries are being heard. Just last week, The Fragrance Foundation, lead by President Linda G. Levy, announced that its entire board — comprised of 32 members, all non-Black — will meet to brainstorm ways to expand diversity and inclusion. "The truth of the matter is that we all need to move forward together and face the reality that it is time to not just contemplate but to take action and make changes," she said during a webinar last week. "The fragrance community must embrace diversity and inclusiveness. We will emerge more resilient, and must be improved and reinvented in many ways."