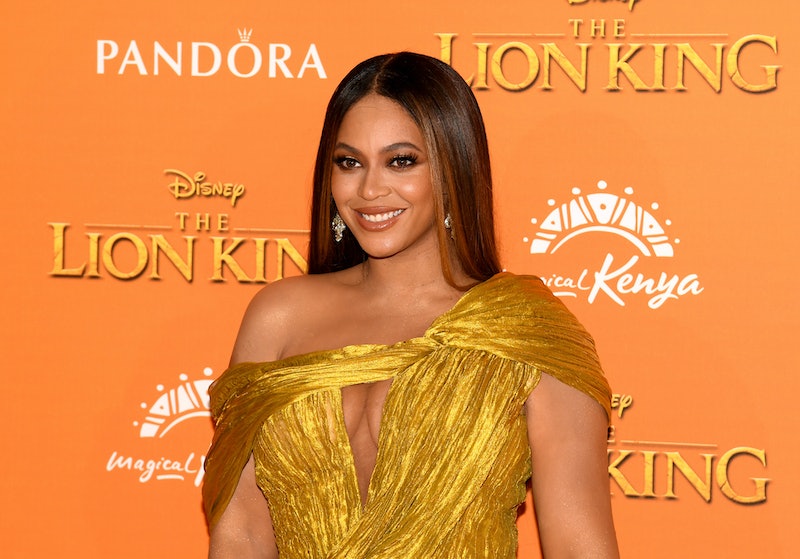 There's no denying that snakeskin accessories are having a major moment right now, and Beyoncé's python boots are further proof that this trend isn't slowing down anytime soon. While supporting the release of the film Queen & Slim, the singer wore the same style of Brother Vellies' boots that were seen on the big screen. But in true Beyoncé fashion, she was sure to put her own spin on the style.

In a series of Instagram shots posted on Beyoncé's account on Nov. 30, she's seen wearing the eye-catching Palm Boot with a structured, olive green mini-dress from Balmain and a pair of gold shoulder duster earrings. However, Queen Bey's styling of the boots was quite different from the film's, which matched them up with a fitted, brown zebra-print Adam Selman mini-dress.

Queen & Slim is the first feature film from Melina Matsoukas, who has previously directed music videos for Beyoncé, Rihanna, and more chart-topping artists. For the film, Matsoukas tapped Shiona Turini — the stylist responsible for the memorable looks in Beyoncé's "Formation" music video — to create the costumes. According to Vogue, Turini commissioned the custom snake-skin boots from Aurora James of Brother Vellies. The boots are a major part of a main look worn by Jodie Turner-Smith's character, Queen, in the film.

Lucky for you, you can channel both Queen and Beyoncé by slipping into your own pair of Palms Boots. Ringing in for $750, the handmade, super-sleek style features a mid-calf shaft and a 3.5-inch heel. The boot's neutral color palette makes it a versatile style that you can wear with a range of pieces already living in your wardrobe. Consider styling the duo with a pair of jeans and an oversized sweater on the weekend, and with a long-sleeve, velvet midi-dress for a holiday event.

Ready to shop a pair for yourself? Continue on to scoop up a set of these on-trend boots before your size sells out.