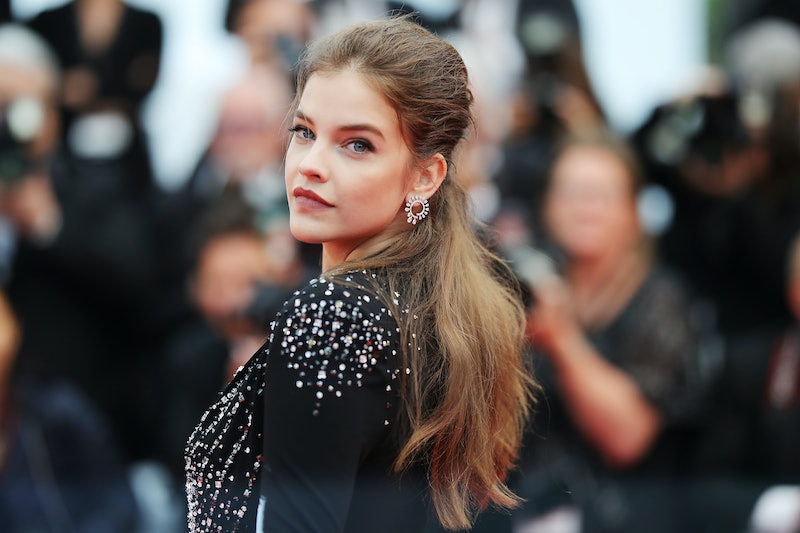 Love was in the air in Milan over the weekend, with one of Hollywood's most fashion-forward couple's style on full display. Barbara Palvin and Dylan Sprouse attended the Boss Spring/Summer 2020 show on Sun. morning, coordinating in matching pantsuits as they strolled through Italy hand-in-hand. Palvin opted for an oversized white ensemble while Sprouse went with blue, both finishing their look with white footwear. The Victoria's Secret model kept her makeup look neutral, but Barbara Palvin's ponytail was making a major impact. The sleek, high hairstyle had textured waves throughout, offsetting the menswear-inspired ensemble with a youthful yet sultry flair.

With her golden brown hair pulled up into a sky-high ponytail, the 25-year-old was teaching a lesson in serving major face. Alongside neutral lips and a copper eye that made her blue eyes pop, Palvin's hairstyle likely convinced women worldwide to cancel that appointment for their next big chop. With wavy strands falling beyond her shoulders with shiny, tousled texture, the model proved ultra-high ponytails aren't exclusive to international pop stars. Offering up a flirty vibe that juxtaposed her monochromatic look perfectly, the Hungarian model further proved her endless versatility in the beauty department.

It's not unlikely for the changing of seasons to prompt a spontaneous switch-up, with everyone from Selena Gomez to Courteney Cox opting for a new look for fall. If you're not feeling bold enough to commit to an impromptu haircut, testing out this celebrity-approved style is a great plan B. If Chrissy Teigen and Regina King's recent hair moments are any indication, the high ponytail is making a major comeback this season. As proven by Palvin's well-balanced look, it's super versatile and can be easily styled for a range of occasions.

Before you give the trend a whirl, add a few styling essentials to your cart. Ahead, The Zoe Report's product picks for a top-notch, model-approved pony.

The tousled texture in Palvin's ponytail amped the look up another notch, and this adjustable iron from Paul Mitchell will help you achieve a range of patterns.

Make your waves pop with a dose of shine via this cult-favorite glimmer spray from Moroccanoil.

Make sure your style stays in place with the help of this flex hairspray from Living Proof — it's got SO many rave reviews.