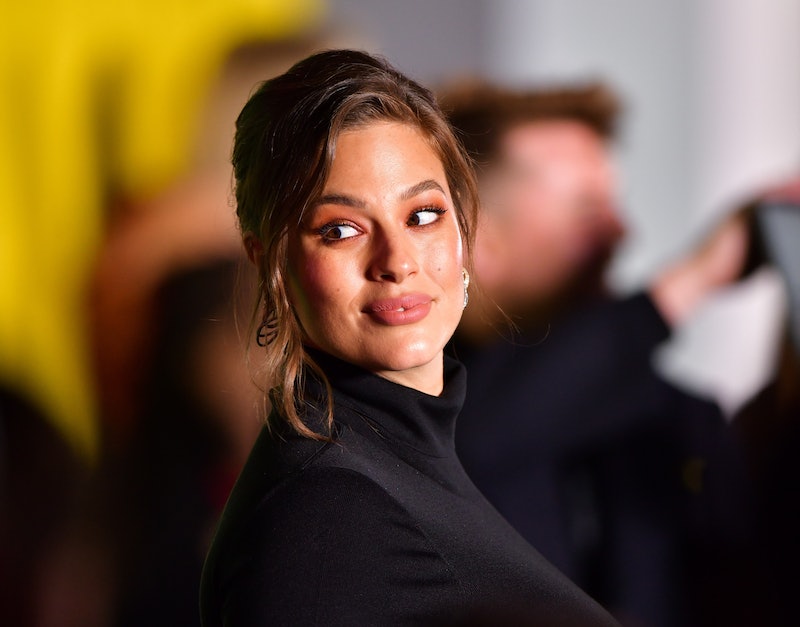 The nine-step skincare routine is gospel now, and try as they might, no buzzy, lesser routine has really cracked its foundation. You can reduce those steps, but the shelves of serums, oils, and creams on bathroom counters aren't going anywhere — until maybe now. Recently, model Ashley Graham shared her beauty routine, as well as her surprisingly simple pre-makeup ritual. While the makeup routine itself was gorgeous and low-key, Ashley Graham's skincare prep she shared beforehand is not to be looked over. Indeed, it's expensive — $294 in total — but this pre-makeup regimen makes up for it by being so simple; it only requires two steps (!!!) and the combo is convincing.

Starting out in her May 6 IGTV video, Graham showed followers the two products she's been using pre-makeup for the "last five months"; SkinCeuticals' C E Ferulic With 15% L-Ascorbic Acid serum ($166) followed by SkinCeuticals' Triple Lipid Restore 2:4:2 cream ($128). Clearly, Graham is a fan, especially considering it's not her first time touting her love for the brand; last year she showed viewers in a Harper's BAZAAR video that the serum also makes an appearance in her nighttime routine.

As you could probably guess, the model is not the only SkinCeuticals fans. The vitamin C serum, in particular, has a major cult following, winning it 1,900+ five-star ratings on Dermstore, loving reviews from beauty editors and dermatologists like Dr. Shereene Idriss, and adoration from other celebs like Sienna Miller and Brooke Shields. And there's a reason for that: The serum and cream are known for being effective at fighting damage and repairing and brightening skin, so even though the brand's products do cost a pretty penny, many of them have thousands of users who confirm that they're worth it.

Plus, as Graham demonstrates, the two fan-favorite products she uses also serve as a great primer for your makeup. Post-application in the video, the model (who frequently collaborates with and models for Revlon) goes on to share her surprisingly affordable makeup routine using products like Revlon's PhotoReady Candid Natural Finish Anti-Pollution Foundation, PhotoReady Candid Antioxidant Concealer, and its Skin Lights Face Glow Illuminator to give her a subtle glow. But though those products definitely help, there's no doubt that her two-step skincare routine plays a major part in the final effect.